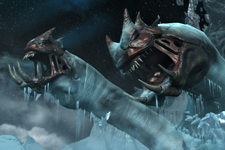 The frozen remains of Izbithu jut into the sky over Tarken Galcier, a ghastly reminder of the vast power locked away in the realm’s god-sealed tombs. Izbithu was once the largest of all the akvan, enveloping entire civilizations from the dawn of creation. She was so powerful that a prison constructed by the Vigil themselves could not contain her, though she bought her freedom with her life … or so it would seem.

Read on for preview of the harrowing journey into the mother of akvan that awaits in Glacial Maw, the new level 65 dungeon launching next week with Nightmare Tide.

The outbreak at Ghar Station Tao has scattered researches across Tarken Glacier. Adrift in frigid snow storms and swirling gales, many stumble toward the carcass of Izbithu for shelter – and into the waiting jaws of Shigoroth, an ice drake with a sweet-tooth for Eth.

On one hand, Shigoroth confirms that someone is bringing akvan back from the dead in a bid to conquer the plane. On the other hand, it’s eating everyone who could spread the word….

Defeating Shigoroth clears the path to Izbithu, leaving only a pile of corpses and scraps between your party and the dungeon descent. Unfortunately, the corpses and scraps take on a life of their own when a dark presence melds them into Apotheon, guardian golem of the Maw.

No one is less pleased at this turn of events than Apotheon himself. A mangled mess of sharks, tentacles, and Telaran trimmings, he blames you for his hideous form. To proceed, you’ll have to blow open a hole in his defenses and send him back to the grave.

From the outside, Izbithu appears to be frozen for eternity. But once you’ve dispatched Apotheon and climbed inside, you’ll find that the truth is far more grim. Her sheltered, thawing innards are home to a hive of sentient parasites led by Toknoth, a skittering colossus who hopes his host-mother will rise again.

Toknoth has thrived inside Izbithu for eons, feeding from her primordial flesh and disposing of ingested invaders. It’s the world that he knows, and he’s vicious in its defense. So, too, is his breath – the vile, spewsome result of eating the dead for ages on end.

HEART OF THE BEAST

If you can purge Toknoth and cleanse his lair, the full scope of the akvan plot is yours to uncover. Deep inside Izbithu, you’ll find a familiar face is at the heart of the matter … along with a horror of infinite scale. No less than the fate of the Glacier – and the planes at large – will be decided by the battle that ensues!