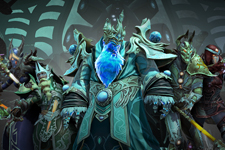 On a good day in Draumheim you could do brunch with crooning unicorns, tune the merriment cannons with Zoning Commission bureau-cats, and stroll Polyp Promenade with King Kondraum’s liver, the feisty organ who’s been left in charge of the court.

He’s poisoned Draumheim with corrupted wine, turned Kondraum’s liver into a drink-crazed tyrant, and unleashed fresh monstrosities to consume the city from within.

It all reaches a breaking point in Citadel of Insanity, the new 5-player Nightmare Tide™ dungeon filled with very real horrors vying for control of the city of dreams!

You arrive at Draumheim with Kondraum at your side, but after he’s waylaid in the bowels of the city, you’re left to face Glacieus alone. This giant crustacean is covered head-to-claw in impenetrable armor, and your success – or failure – will boil down to gut instincts in a fight where ingenuity rules!

After your battle with Glacieus it’s full steam ahead to Polyp Promenade, where you’ll find Cresaphin gorging on the city’s stock of wine. Alas, Cresaphin is a massive nightmare worm, and the wine has been cursed by Arak. Before long, you’ll be knee-deep in venom, eggs, and slippery drool that stings as much as it stinks.

Carving through Cresaphin will lead you to Skylla, a poor villain hoping to earn a place in the palace and a bed to call to his own. Skylla is every tyrant’s nightmare: a desperately loyal minion who, despite trying really hard, just can’t quite get things right. Except – perhaps – this time…

If you can survive Skylla’s surprise, Kondraum will rejoin your party for a showdown with his besotted liver. Of course, the royal organ has other plans, and before you know it you’ll be battling much more of Kondraum than you’d like. Can you flush the liver, purge the Palace, and save the city of dreams?