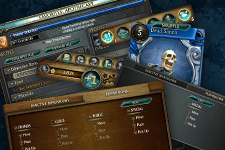 Gingers here to talk to you all about some User Interface (UI) improvements targeted to go live with RIFT 3.1. Let’s dive right in!

Player Portraits: You’ll have the ability to change your portrait frame by right-clicking your player portrait instead of going into Settings. Crafting: You’ll gain the ability to mark crafting recipes as favorites. This favorites section can be bookmarked and added to your hotbar.

First off, I’ve been working with our engineer Carpy to bring you some long-needed Dimensions improvements. These are some features that players have requested for a long time, and we’re happy to show you what’s in the works.

Let’s say my Dimension has this large tree in it, and I really want to build a treehouse. Previously, I’d have to make some elaborate staircase to be able to reach the tree, but now I can fly there! When in Edit Mode, there will be a new button on the far-right that’s bound to the “6” key. This new toggle will allow you to leave your character’s body and fly the camera around so that manipulating items will be much easier. Once you’re finished pretending you didn’t just sing I Believe I Can Fly, simply push the button again to snap back into your character’s body.

I want to allow my engineer buddies MrScary, Snedhepl, and Carpy to pick up items in my Dimension but I don’t want to give all my friends that much freedom. With this update, I’ll be able to add those names into my “Special List” within the Dimensions UI by clicking the “EDIT” button. This will bring up a window that lets me add or remove names on my special list. Each special list is specific to each of my Dimensions.

This feature is also being added to Guild Dimensions! Carpy isn’t a member of my fake guild BestGuildEver, but I can add him specifically to my guild’s special list. (Only guild ranks with “Edit Ranks & Permissions” enabled can edit these lists.)

On the other hand, there is this one door-to-door salesman called Deeps coming to my Dimension trying to sell me trinkets, and I want to ban the little guy (I know, I’m evil right?). If I add him to my ban list, Deeps will then be kicked from that Dimension and unable to enter. Ban lists are also specific to each Dimension.

One quick note on the special and ban lists; these features are still being worked on which means they are not guaranteed to make it in for 3.1 and if they do, how they work is subject to change.

When you enter a Dimension and you don’t have edit rights, the large button in the middle will be a large +1. This should ensure that visitors won’t miss out on giving you your well-earned votes.

Oh no, my minion Gil is low on Stamina and doesn’t have enough to go on this adventure. But wait … Stamina Recharge to the rescue! On the bottom of the minion’s UI there will be a new button with the stamina symbol letting you know how many charges you have.

Charges are expected to be available for purchase on the RIFT Store with 3.1. However, if you have no charges, simply click the button and any minion that is low on stamina will display with a pulsing plus. If you click the plus, you will be given the option to buy the charge with Credits. Each Stamina Recharge can refill 1 minion (but once recharged, there is a 24-hour cool down before that minion can be recharged again).

MrScary, Snedhepl, and I are happy to bring you minion shuffling! Don’t want to do that Dimensions adventure? Now you can skip it! Here is a quick rundown of what happens when you shuffle. 1. Pushing the shuffle button brings up two options: use Adventurine or Credits. Note: The Adventurine price grows each time you use it for that stack and resets during the daily reset. 2. The adventure that you didn’t want gets put on cooldown and you randomly get a new adventure for that deck.

As always, prices are subject to change.

You will be able to link your minions in chat to show off the full glory of their stats. Hit ENTER to open chat, then Shift+Click on any of your minions to create a link. This link will display your minion, their stats, and their level (not their experience bar though).

Lastly for minions, we have added a sound to accompany the minion icon displays in your alert tray.

We often have new portrait frames for players to use, but before RIFT 3.1 you’ve had to dig into Settings to switch between them. This has been changed to be much more convenient; simply right-click your portrait and BAM, there it is!

If you are amazing enough to also have the rare diamond icon, this too will be changeable by right-clicking the player portrait.

MrScary, our UI Engineer, has been hard at work adding a new Favorites feature
Community