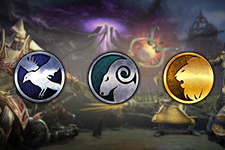 Conquest has returned to RIFT, and with it comes a chance to earn a title for defeating a Dev!

As RIFT developers, there’s nothing better than getting a chance to experience the game with you, the players. So we’re extremely excited for Friday, Dec. 19, when we’ll join you in Conquest in a massive throw-down for pride and glory!

Starting at 11am PST (7pm GMT), Devs will be on the EU shards honing their weapons and looking for players to battle it out with. Defeat one, and we’ll award you with the prefix title “Mutineer.”*

After being ruthlessly battered, we’ll head over to the North American shards at 3pm PST for a chance at new foes. Devs will have the prefix DEV_ appended in front of their name, so they’ll be easy to spot.

Good luck in your hunting, and well met on the field of battle!