Not a particularly exciting update, but a positive one nonetheless. We had three new C.U.B.E. pushes this week, with bug fixes and memory usage improvements being the twin focuses of this push. Some of you might wonder why we are working on C.U.B.E. right now, instead of things for Beta 1. Please keep in mind that C.U.B.E. is part of Camelot Unchained, and as we improve the memory usage of it, we improve the memory footprint of the main game. After all, our game relies on our players actually building large and interesting structures that other players will destroy for fun and profit. Thus, as C.U.B.E. becomes significantly more efficient in its memory usage, so does the main game.

Next up, our newsletter went out today with lots of news, an update from PAX East, Part III of The Great Depths Raid, and so much more. You can find it here (http://eepurl.com/bZ0Bx5). Sadly, mistakes happen (even to the “Grey Lady” The New York Times), and so did we, so Backer HelsEch, please forgive us for misspelling your name in the newsletter.

In other Camelot Unchained news, we have made progress on the new and improved ability system. It’s way too soon to say “that’ll do, pig!” but things are moving forward with it. As our User Stories will show, we got a lot of other things done besides our work on C.U.B.E., even with the cold/allergies/flu/plague stuff the last two weeks. As we stated previously, we been working on multiple fronts, including the ability refactor, new code, and some cleanup from the recent code integration. It’s best summed up by a quote from George, “Needle in a haystack searches produce a lot less fun-sounding results than making new things, but we gotta do this every once in a while or bit-rot sets in and nothing works.” In terms of our actual User Stories, we had 17 old cards with 45 completes and 4 new cards with 15 completes.

As a Backer, I’d like to play in new biomes that change according to Realm ownership. – Biome 02
Concept ambient SFX pass biome 1 – “Neutral” and “Owned” by each Realm. – Complete
High cliffs along shore ambient SFX. – Complete

As a Backer, I’d like to find unique environment props, or unique locations, that add flavor to the environment while I’m exploring the Biomes.
Beehive ambient SFX – Complete

As a Backer, I’d like to know about smaller changes that don’t have their own user story.
Terrain editor now supports textures of different sizes and no longer reduces all textures to the lowest size used in a map. – Complete
Closed doors image/art for stretch goals page. – Complete
Concept art pass on biome variations using current assets. – Complete
Mock up web page to house CSE comics. – Complete

As a Backer, I’d like to see graphical and networking performance improvements, when building and destroying structures.
Audit third-party software to use in the creation of materials for buildings. – Complete

As a Developer and Backer, I’d like to see improvements in memory usage and threading.
All around memory reduction in client and C.U.B.E. – 600mb – 800mb reduction in game, to 1.5gb in worst case C.U.B.E. maps. – Complete

As a Developer, I’d like to see improvements in the editor to facilitate my work.
Add scaling option to material settings that apply to all textures used in a material. – Complete

As a Backer in Beta 1, I’d like to have a sampling of Arthurian light, medium, and heavy armor to wear in game.
Medium Armor – Second pass Beta 1 version of materials. General improvements. – Complete

As a Backer in Beta 1, I’d like to have a sampling of Viking light, medium, and heavy armor to wear in game.
Light Armor – High and low poly sculpt complete. – Complete

As a Backer, I would like to be able to give to my friends and family the extra tiers that come with my pledge.
Solutions to additional edge case and security issues. – Complete

As a Developer, I’d like the Camelot Unchained ability system to fully support the design scope of the game for B1.
Additional features to core updater to support ability system refactor. – Complete
First pass prototype of new base ability functionality. – Movement, damage, and death! – Complete

As a Backer, I want to learn more about ley lines, places of power, and ??? – in Camelot Unchained.
First pass design. – Complete
One interesting callout: a memory management tool that Andrew has been working on/off with for a while. It might not seem like much, but it has already helped us track down some memory issues in the build much faster and easier than would have otherwise been possible. Speaking as an ex-programmer, I could have really used that kind of tool back in the day.

I also found the time to work on the design for Ley Lines and PoPs, and they are coming along quite well so far. There’s a lot of interesting stuff in the design that you won’t find in any other MMORPG that comes to mind. I know you’ll like what you see when we present this document later this year. In the process of working on them, I also had to create some really crappy concept art which I’ll share with you only when I’m a) feeling either really, really brave; b) feel the need to be mocked; c) am out of mind; or d) all of the above, because it really is quite atrocious!

However, in terms of art and artists that should never have to worry about being mocked about their artistic talent, let’s quickly move on to some work from the team. In Hollywood screenwriting rules, action should always precede dialogue. Well, let’s start with some stills of what a player will look like when they are throwing a dagger. Personally, I always like the way James Coburn did it in The Magnificent Seven, but this works as well.

Next up, here’s a sampling of our current UI kit for the game.This gives us a more standardized/base look when both CSE and our players modify the game’s UI. 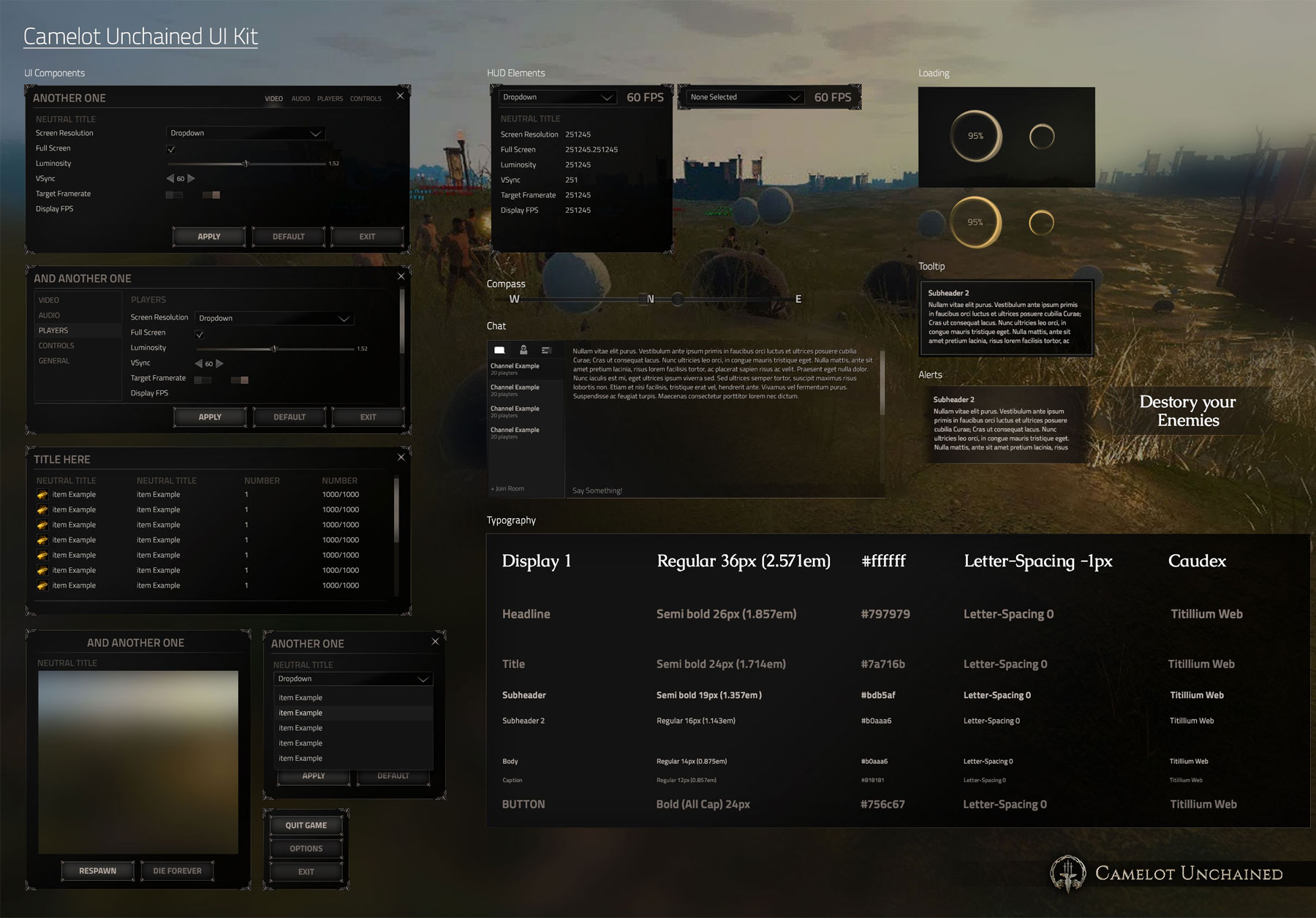 Another stylish outfit (light armor) for those ever-stylish TDD.

By the way, I’m really looking forward to the different “court wear” for this Realm. For those Vikings, I expect they’ll at least wash their animal pelts before meeting with the king. OTOH, maybe nobody would notice either way? I kid, I kid. And speaking of kids, here’s a more rugged look for our Vikings featuring the pelt of an animal who would enjoy dining on a kid or two (or the entire herd). 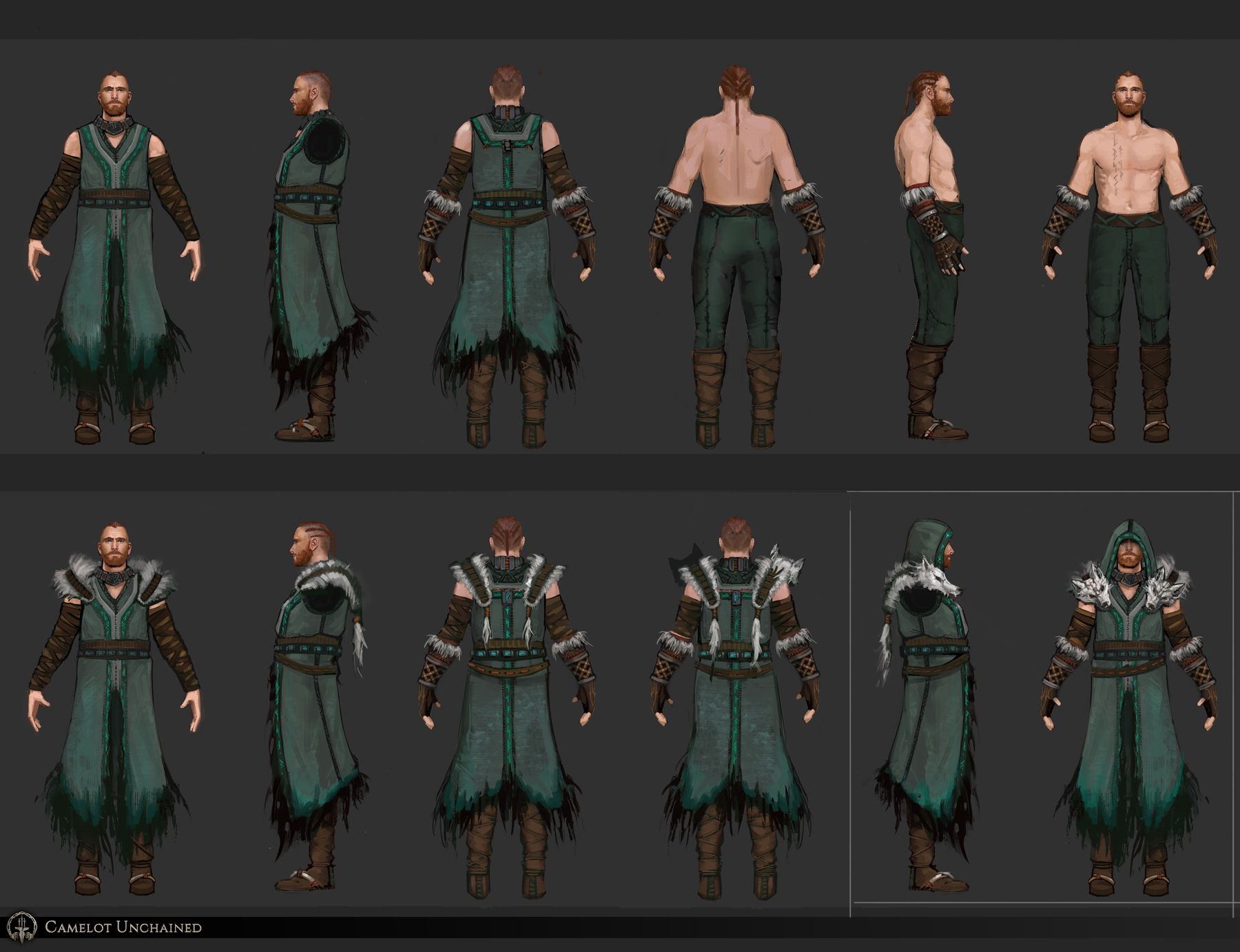 Here’s a render (unfinished) of same set of Viking light armor seen above. 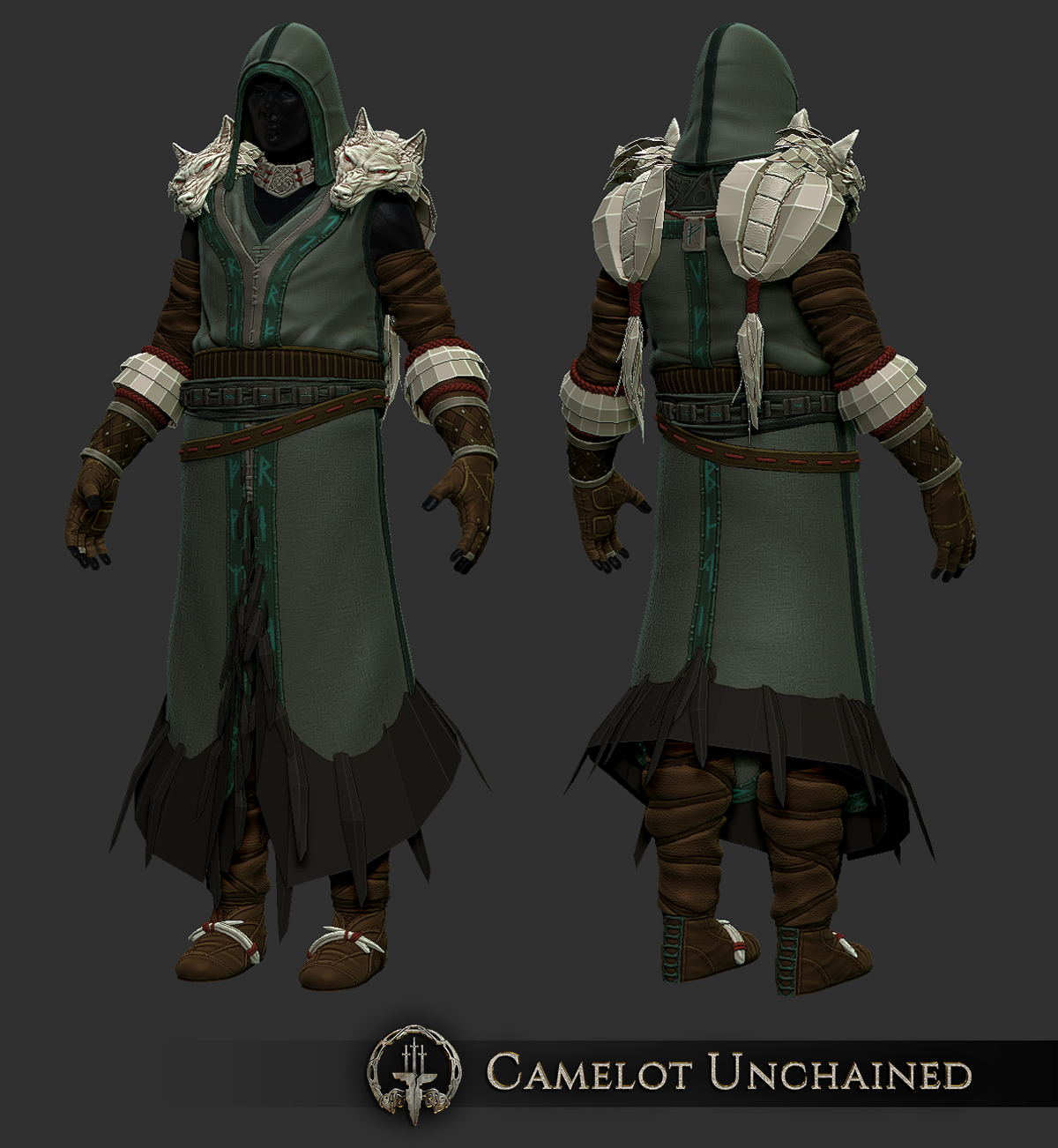 Now, since CUers don’t live by concept art or renders alone, here’s an in-game screenshot of a small group of buildings done by one of our Backers, Bleiz. 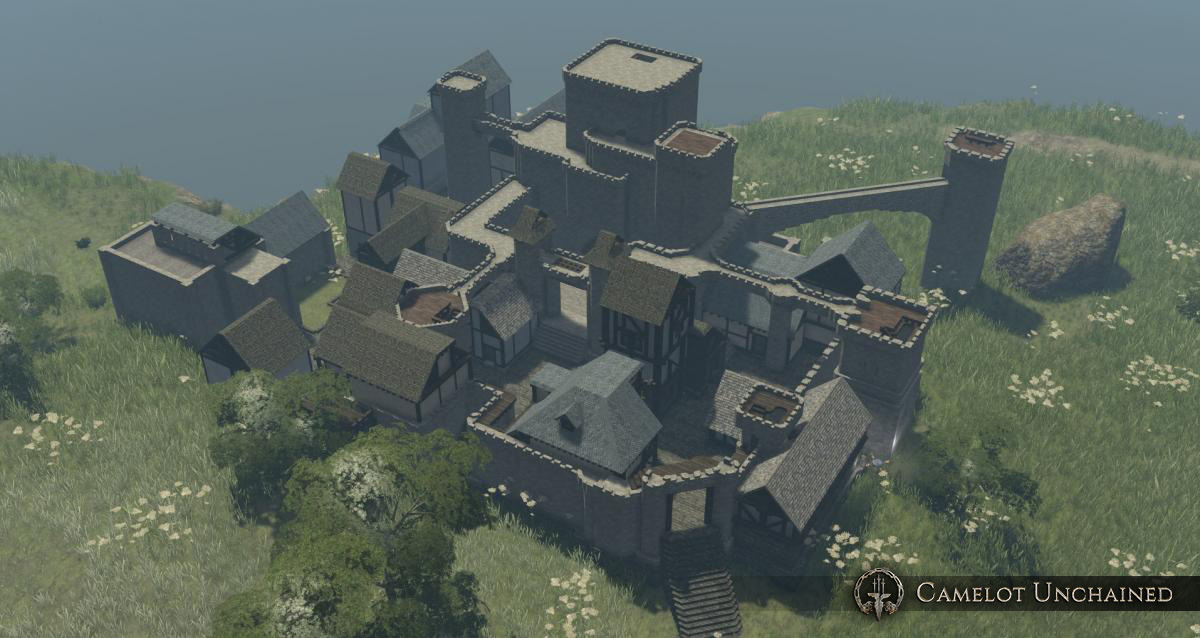 And here’s another one, a much larger one.

Of course, this builder is just getting started, I think. Does our Master CUBEr Necromaniak have some friendly competition from this up-and-comer? Time and tiles will tell.

And to finish out the updates from the Wondrous Magical ArtLand, here’s another comic strip from Sandra. Enjoy! 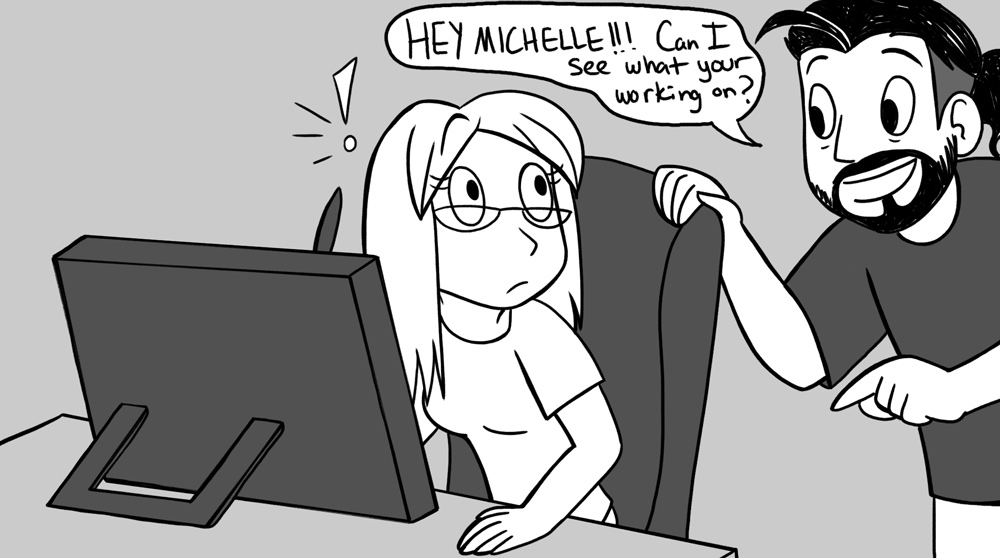 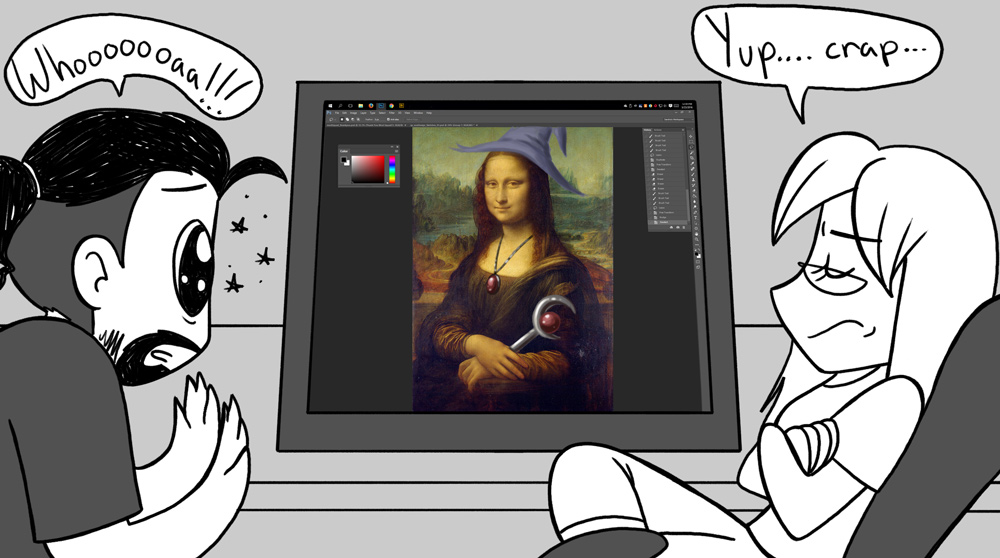 Well, that wraps things up for now. I want, as always, to thank our Backers for their support and patience. We have a couple more programmers on the way this summer (one is our returning intern), and we continue to push to hire more. While we have met one of our programmer Stretch Goals already, we want to meet the second goal before the end of the spring. We’re halfway there, so…

Enjoy your weekend, all! If you haven’t been in the new version of C.U.B.E., it is really worth checking out for your weekend building fun.