Happy Friday, all! For those of us in the United States, this is the start of a holiday weekend. We haven’t left yet (though we are off Monday), and we have a lot to talk about, so let’s get started.

First, we had some visitors to the studio this week. A former Mythic guy asked us if we would allow a group of students from his former school to tour the studio and meet with some of the developers. We were proud, and a little nervous, about their visit. After all, some of you have seen our streaming sessions and know that we are, well, a rather outspoken bunch. Fortunately, we were on all our best behavior, and the visit went without incident. One of the nice things was when I asked how many of the class are interested in becoming programmers: more than a third of them said yes, and got to interact with Andrew. The best part was that the group was equally split between boys and girls. Everybody from the school’s side were really happy about that. Our industry has had a desperate need for a more balanced workforce for only, like, forever, and getting more female programmers would be a great start. Hopefully we might have helped, if only in a really small way. Here are some photos from the visit. 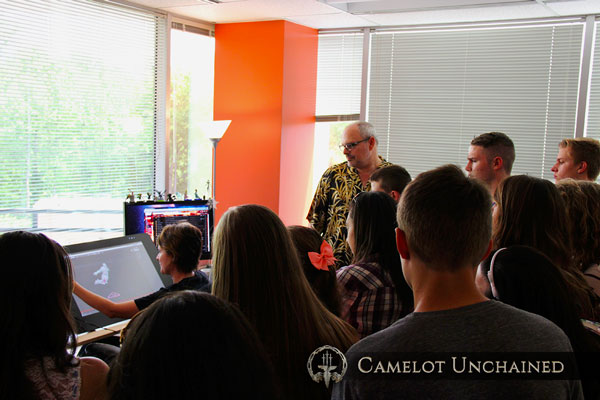 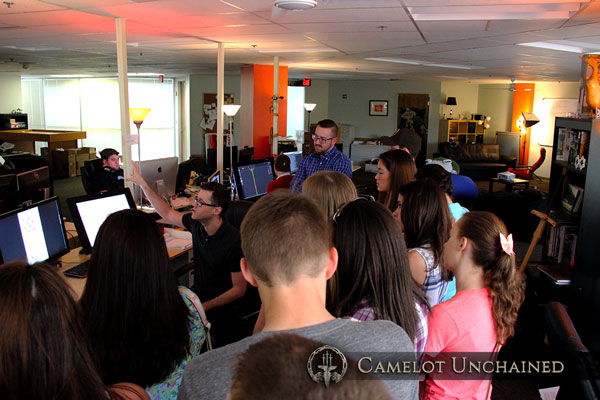 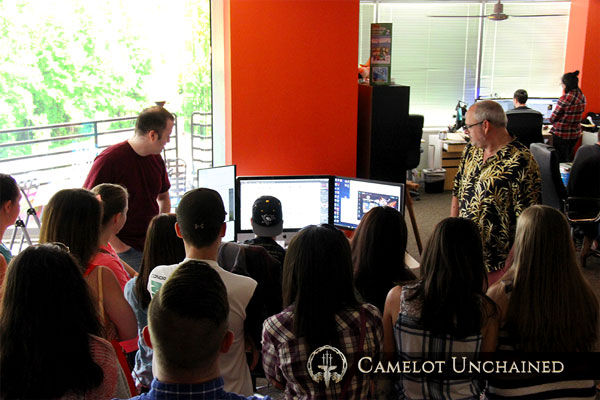 In other personnel moves, the first intern of the summer has appeared. Her name is Jules, and she will be working with us on videos, web and graphic design, and other intern stuff (like unpacking the t-shirts we got back from Merchline). She went to school with my son (who will also be helping us out a little this summer), and she’s a great summer addition to the studio. You’ll meet her in our next streaming session, but here’s a photo of her. 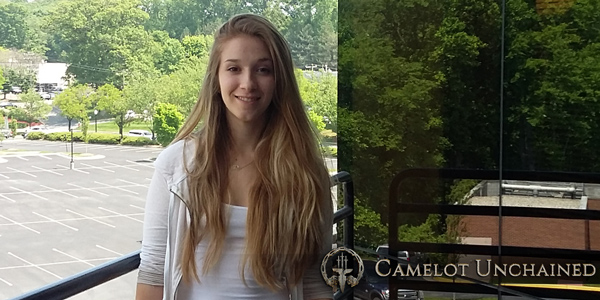 Our second summer intern, Garret, will be joining us for his second summer at the studio after another year at college. He was a nice help last summer, and we expect even more from him this year.

Secondly, as the title of this update states, size does matter in some circumstances; especially when it comes to the Camelot Unchained Building Environment (C.U.B.E.). This fun addition to Camelot Unchained has been slowly growing in popularity with some of our Backers, and this week we passed a fun milestone. Since we began tracking the game, our Backers (not us, just our Backers) have laid down over one billion blocks! That’s a pretty impressive number of blocks, considering the size of our Unchained Community. Today’s user story updates talk about some other nice additions we’ve been making to C.U.B.E., and we aren’t stopping there. For example, some people say that a picture is worth a thousand words, so here’s a picture and a link to a YouTube video (https://youtu.be/pdfmovEUbB0) that might even be worth a little more than that.

What you just saw was the next pass on a method for players to add round structures to the game in C.U.B.E. Andrew debuted his first pass on this system many months ago, and another member of the team has taken the baton from him and is running with it. And, as the video almost shows, running very nicely too.  So, the next time you hear somebody say that you can’t fit a round tower into a square block, you can say that “CSE can do it!”

As we move through the summer, expect to see even more improvement to C.U.B.E. and the launching of a version of The Mod Squad for C.U.B.E.  I promised not to get aboard the hype train, but folks, being able to not only have a billion blocks laid down, but also to show off the tech for round structures, is pretty cool. The tech behind it is not a simple as it sounds, especially when you consider it has to work with our structural integrity system and meshing technology, which allow us to display as many buildings as we do without it turning into a slideshow.

Thirdly, in terms of videos, here’s (https://youtu.be/c4R10Hn7R44) a fun little one that Jules put together after we got a package that we had been waiting for; a much-delayed delivery. I hope you enjoy it!

Now, just so you know: We are not planning on working on a Rift version of Camelot Unchained at the present time. However, we are certainly interested in seeing how it works with C.U.B.E.

In terms of Camelot Unchained, as we’ve started to turn more of our attention to making a game, and not just an engine, part of that effort has been to improve the look of the maps. Right now, Ben is working on all the safe islands, and as part of that, we’ve been adding new trees and other items to the game. Here is a sampling of saplings, both realistic and a bit more fanciful. 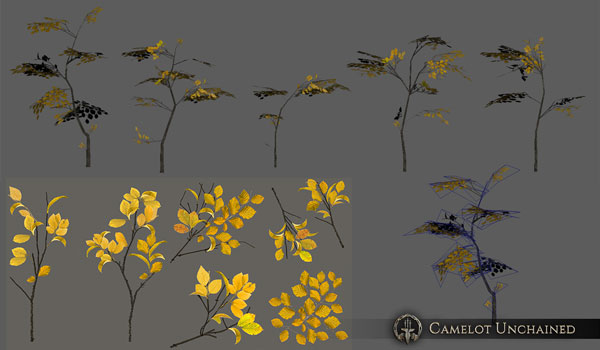 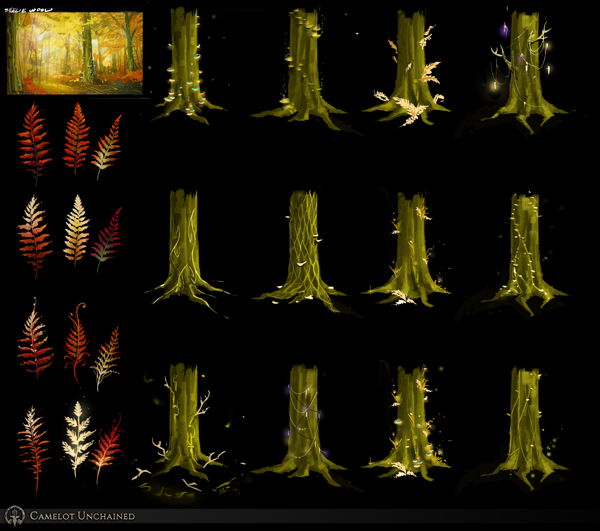 The new islands are beginning to take shape nicely, and they are big, with plenty of room and plots for people to build on.

And what’s good at cutting down trees? An axe, of course, and while we don’t have new shots of them to show, we do have some great-looking swords, including the ones that were stolen from the Vikings last week. We’ll start off with some Arthurian swords and then ‘cut’ to the Vikings. 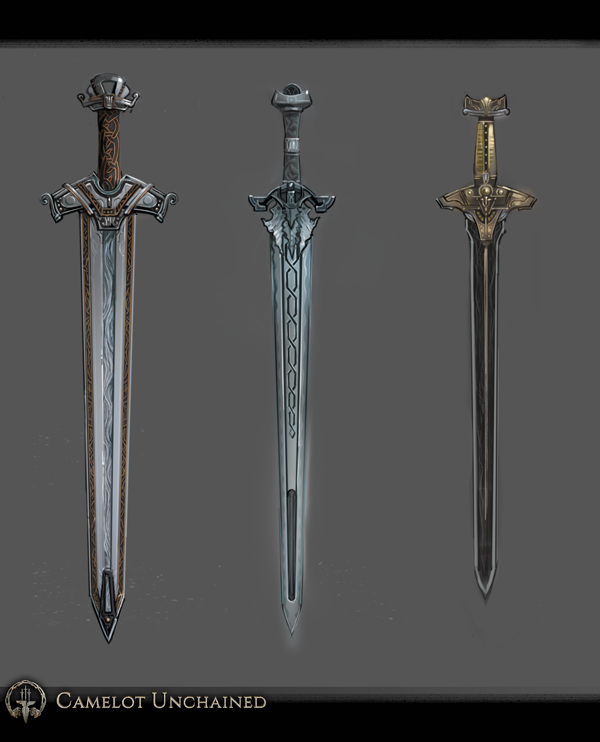 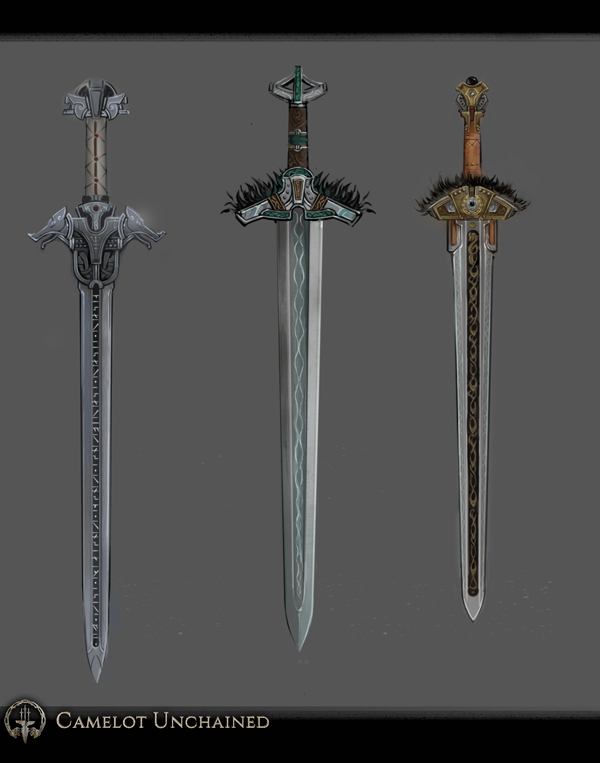 In terms of User Stories, it’s a big one, with lots of nice things hidden in the nooks and crannies. We had 23 old cards with 80 completes and 4 new cards with 31 completes; enjoy!

As a Backer, I’d like to play in a procedurally-created environment. – Part Four.
Allow impostors to be aligned to any axis for terrain placement.- Completed
Fix missing impostor renderables from terrain; alignment would make them disappear or not be aligned.- Completed
Tangent normals for terrain aligned objects are correct, avoid normal mapping artifacts at high angles.- Completed

As a Backer, I’d like to play in a procedurally-created environment. – Part Four.
Allow impostors to be aligned to any axis for terrain placement.- Completed
Fix missing impostor renderables from terrain; alignment would make them disappear or not be aligned.- Completed
Tangent normals for terrain aligned objects are correct, avoid normal mapping artifacts at high angles.- Completed

As a Backer, I’d like to play in new biomes that change according to Realm ownership. – Biome 03
Biome 3 – Determine neutral asset list from concept.- Completed

As a Backer, I’d like to know about smaller changes that don’t have their own user story.
Update perfhud and fix bugs.- Completed
Add ability to pull assets from DB and save locally.- Completed
XML formatter serialization support for IXMLserializable – including bug fixing.- Completed
Add automated reporting of statuses of our World State and ChatLog databases.- Completed

As a Backer, I’d like to see the world of Camelot Unchained continue to develop through its lore.
The Great Depths Raid Part 4 – First Draft- Completed

As a Backer, I’d like to experience positionally-based audio and music within the world of Camelot Unchained.
Sounds created by yourself vs others are treated independently, allowing for more control.- Completed

As a Backer, I’d like to see improvements in server stability, speed, and robustness.
Improvements to server functionality to reduce need for unique solutions.- Completed

As a Developer, I’d like to see improvements in the editor to facilitate my work.
Simplify adding blocks and their substances by adding a block and substance editor.- Completed
Bug fixes to animation clips getting into a locked state on the DB.- Completed
Add channel sorting to editor feedback.- Completed
Sounds can be added to placeable assets. (Ex: torches can have flame loops, and a beehive can have buzzing bee sounds.)- Completed
Improve data base query speed on assets with some programmer magic.- Completed
Add the environment map lighting to the world editor.- Completed
Water plane remains with the player, making it easier to audit much larger maps.- Completed

As a Developer, I’d like to have a selection of weapons that visually represent each Realm’s identity. – TDD
First Pass Concept Art: One handed high quality “epic” swords.- Completed

As a Backer, I would like to be able to give to my friends and family the extra tiers that come with my pledge.
Determine whether removing a pledge via the editor invalidates gift codes.- Completed
Preliminary testing bug fixes and user feedback auditing.- Completed

As a Developer, I’d like the Camelot Unchained ability system to fully support the design scope of the game for B1.
Second pass prototype of new base ability functionality.- Completed
Add first active effect “guard” as prototype for re-abilitated active effect system.- Completed

As a Backer and Developer, I’d like the rubble from building destruction to be awesome and performant.
First Pass: Rubble renders!- Completed
Player can traverse rubble without getting randomly “stuck” on it.- Completed

Another two weeks down, another two weeks with lots of accomplishments. We’re almost ready for the first major test of the new ability system, and we’re hoping that even with the shortened Memorial Day week we’ll get enough done for a IT/Alpha test next Friday, as our work on the new material system is just about finished.

Another bit of news: we just finished another round of studio testing of our Reward Tier transfer system, and we’ll need help from some of our Backers next week. I’m opening up a thread on the IT Forums to look for volunteers. That thread can be found here (https://forums.camelotunchained.com/topic/14353-it-testers-needed-most-likely-may-31stjune-1st/) and I’ll update it next week. We’ll be looking for people who can devote a couple of hours next Tuesday or Wednesday during a specific block of time (we’ll let you know more precisely next week).

To conclude this update, here’s 3D printed model of our Golem that a company called Eucl3D sent us. We’re working with them to see just how good we can get these things to look. After all, having models of our characters was always part of the plan for some of our Physical Reward Tiers, so it was worth a little time and effort to get this printed. We’ll see if anything comes of it. The first shot is the concept art, the second, how it came out from the 3D printer. 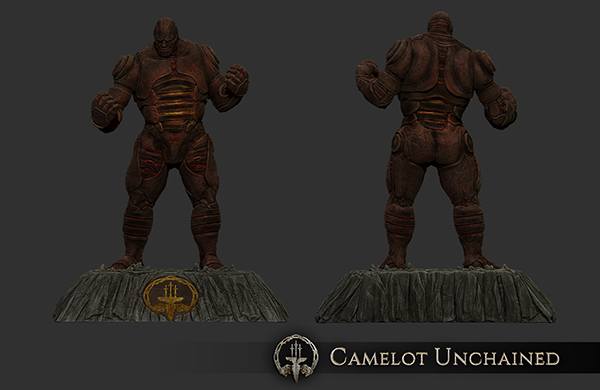 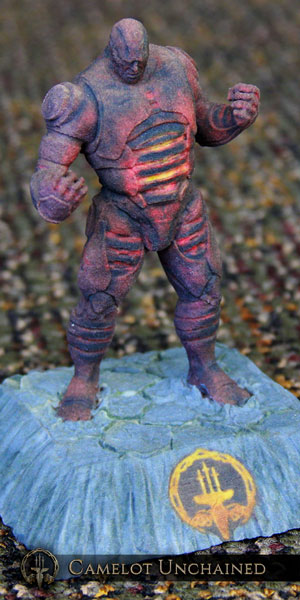 For a first pass, not bad, not bad at all!

As we approach Memorial Day (for those who might not be familiar with it, here’s a link (https://en.wikipedia.org/wiki/Memorial_Day), our studio has two folks who served, and I have multiple friends in/out of the armed forces. We have always opened our studio to any of our Backers who served our (or their) countries. So, as always, we respect them for their willingness to commit, and thank THEM for their support of our/their country.  <bow>

We wish all of you a great weekend (long or short), and we’ll see you next week. Keep your fingers crossed, it could be a short but fun week.