Posted on September 1, 2017 by Rift Universe

We’ve been fairly busy this week on various parts of Camelot Unchained™, from ARCs (previously Bots) to progression, siege engines, stats, art, animation–you name it, we’re working on it! As always, we’ll continue our open and honest communication with you, our Backers, who have graciously joined us on this journey. We’re closing out the week strong here, as shown in our Top Tenish below.

We’ve also updated the Beta 1 Doc on our website with new information. If you’re curious about what we’ve added, you can find the English page HERE, French HERE, and German HERE.

By the way, we have a three day weekend here, since we’re celebrating Labor Day on Monday, so we’ll see you all again Tuesday.

Now, let’s take a look at this week’s highlights:

For art this week, let’s check out those previously mentioned resource nodes Dionne is working on. If you’d like to see any of the creation process of these items, you can catch a couple of livestreams HERE and HERE. Also, special thanks to Dionne, who rescued me from my own stream when I was unable to run it!

Next up, we have renders of the TDD portal marker with terrain ownership variations. This means that if another Realm owns the surrounding terrain, the model will shift to show that influence. The couple of roots crossing across the front will act as steps, with our procedural terrain system creating a small hill to support the model. These first two images are renders from Substance Painter, the primary program we use to create the materials.You can catch Jon’s stream working on a bit of sculpting and materials HERE. 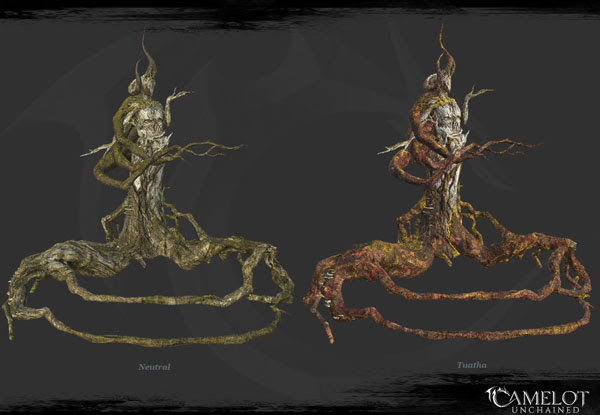 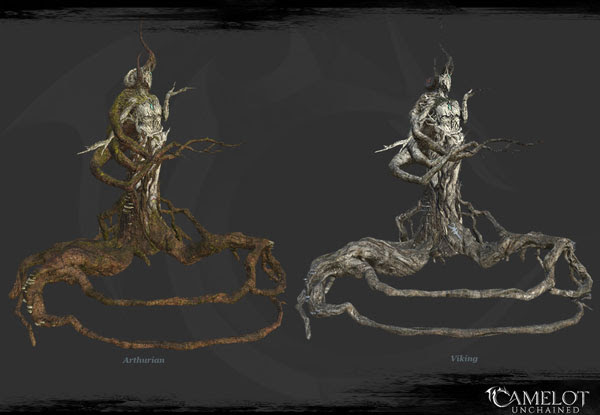 Jon has been experimenting with a different rendering program called Marmoset, which has become one of the industry standards for creating great beauty shots of 3D art, particularly for showcasing. The below shot is of the Viking Realm variation in Marmoset: 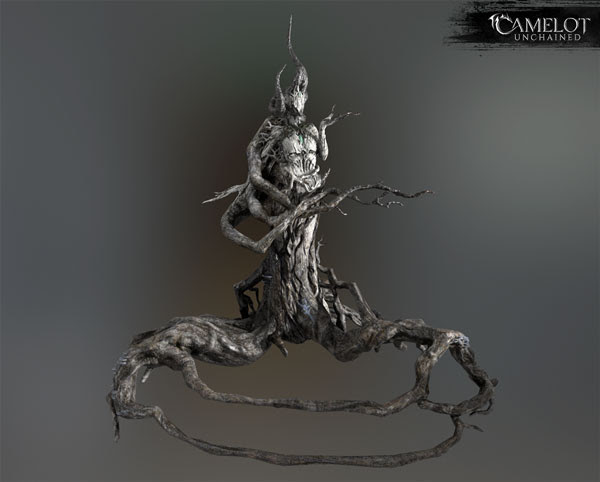 Moving to concept art, we are looking at creating NPCs the player can interact with for Beta 1. Michelle has taken this opportunity to work on some more basic clothing designs, which can later be used by our players, when they don’t want to run around all armored up for combat! This week we have some ideas for the men, from which we’ll choose our favorite pieces to begin working on, and add some Realm-identifying details.

We also just put out a new newsletter this week, which you can find HERE. Much appreciation to Max, who not only assembles the entire thing, but makes sure those responsible for content get their work done on time! There’s lots of extra information in there, and a great intro from Mark.

By the way, if you happen to be in Atlanta this weekend for Dragon Con, you can catch Mark and Andrew’s panel at 2:30 on Saturday, where they will be talking about our progress over the last year, and showing off our work on large-scale battles!

That wraps up our week’s update. If you want to see the more theatrical version of the Top Tenish, with Q and A, you can catch Tim and my (TnT) update stream from earlier today HERE. Many thanks to Apollon who has been amazing in heading up the German translation team, and sent us several wonderful gifts, all the way from Germany! It was a very fun package to open on stream. Danke schoen!