It’s another very busy week here at CSE, which might be surprising when you consider that the week’s focus was on fixing existing bugs. Much of the team has been finishing up existing feature work or fixing bugs and performance issues. Nevertheless, we’ve once again got a very long Top Tenish list full of highlights for the week’s work. We’ve been doing a lot more testing over the past two weeks, so many thanks go out to our Backers for helping us find and fix those pesky bugs you’ve been reporting!

This month’s newsletter is also going out today, and as usual it’s full of plenty of behind-the-scenes info about the development of CU and its developers!

If you missed today’s livestream update with MJ, you can find that HERE.

We are planning on a test this weekend. Here’s the basic info. We’ll have another follow-up email for those applicable Backers with more info. As always, pay attention to our tentative testing schedule to keep up-to-date with our testing.
When:
Sunday, June 30th, 2019

Now, let’s check out the week’s progress highlights in our Top Tenish list!

Okay, so you may have noticed several items referring to “Charlotte” in #15. So what, or who, is Charlotte? And what did we mean about new bugs in? 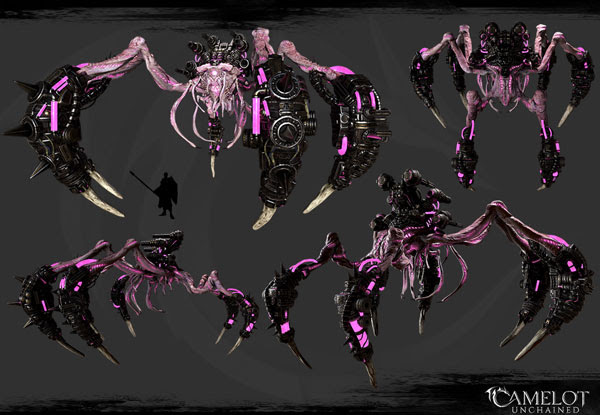 The Charlotte model (named so by Mark) was initially meant to prove (successfully, we might add) that the CU engine can render high resolution assets. The Charlotte model is over 151k triangles and uses three 4k material sets! To put this in perspective, the higher end of our character models for CU come in at around 18k tris and use two 1024 sets and a 512 set. Getting Charlotte into the game has helped us identify further work we’ll need to do to support not only large creatures such as this one, but in general NPC creatures for CU. While her initial design includes lots of futuristic tech (Jon had designed Charlotte for fun many months ago), this will be later changed so we can re-use her as a monster players will encounter in Camelot Unchained.

Jon created several textures for her so we have more variation when spawning lots of them as NPCs.

Here’s a close-up of her glorious and freaky-beautiful punim.

She also has a glow map on her, making her particularly menacing at night! 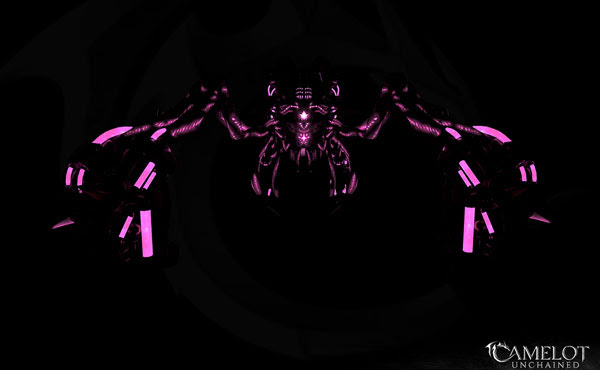 Scott initially blocked out her movement animations so we could drive her as a player-character in the game, and then began blocking out more animations. Click the image below to call up a render of some of those WIP animations. 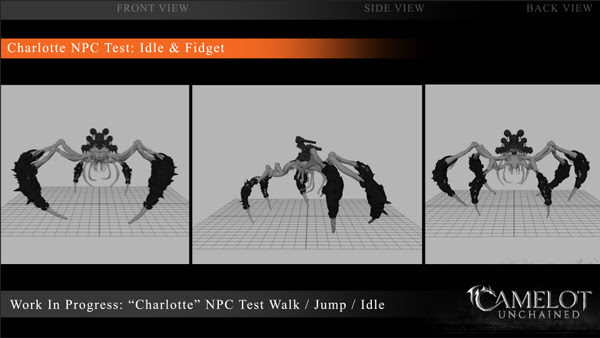 And that’s Charlotte! I (Tyler) can’t wait to change her up a bit more so she fits the CU aesthetic and get her creeping about a matching environment! Jon and I are sitting here while he makes these renders, talking about getting some lights and VFX on her

In terms of additional art this week, we have a couple renders from Jon of trebuchet ammo. These are meant to be a generic ammo type, respectively for each Realm: Arthurian, Viking, and TDD from left to right. 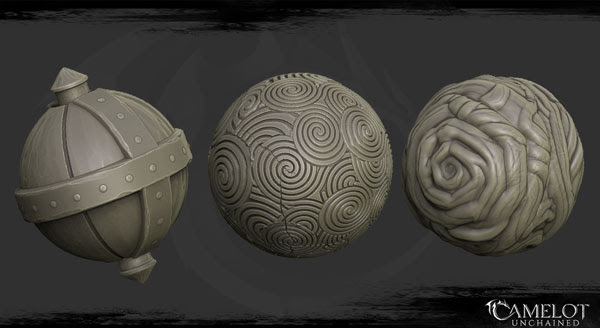 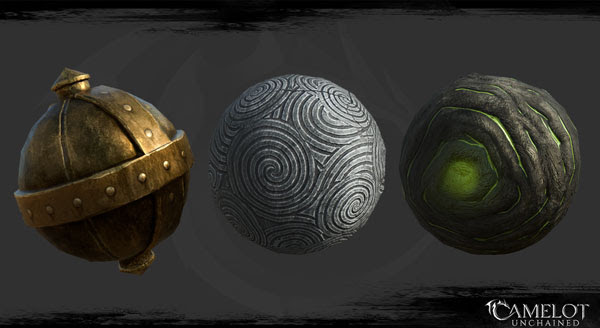 Once we get the supporting tech to show an ability’s ammo on the siege engines, you’ll see these in game, perhaps in one of our siege scenarios?!

As mentioned above, we’ve been concepting other biomes for CU. Here’s a couple images with various ideas for areas ravaged by Veilstorms. 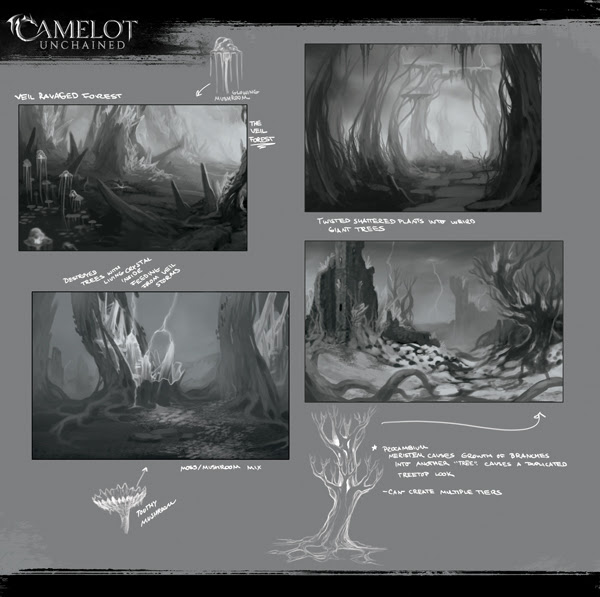 Creepy, right?! None of this is set in stone of course, and is still just part of ongoing concept work, but I soooo want to make some of these things, especially the weird crystal, twisty, tree thing!

And that’s everything for this week’s update from us hardworking folk of CSE. As a reminder, next week we’ll be celebrating the Fourth of July and will be closed on Thursday and Friday, so there will consequently not be an update livestream.

Have a great weekend all, and I hope to see you in our weekend test!