Hey, hey, it’s Friday! As I’ve said before, just because we hit Beta 1 doesn’t mean we’re planning on slowing down anytime soon! We had a busy week, with plenty of testing, lots of updates to the builds, and we even managed to find time to send Andrew and Mark off to Dragon Con! If you’re there, check the schedule if you want to meet them at one of the panels!

We’ll be running a test of Camelot Unchained during their panel Sunday evening, September 2nd. While the test will start earlier at 6 PM EDT, their panel will start at 8:30 EDT, but please check the con schedule if you are there, in case there are changes.

This week saw a lot of tuning of building, building stability, and destruction, which have been moving along nicely. Sunday’s test will be the one from Wednesday August 29th, but more stable than the bleeding edge build we tested earlier today, and it will be open for IT, Alpha, and Beta 1 Backers. We’ll send out a separate testing email later with more info.

Moving along with the week’s update. If you missed our update stream and Q&A with Tim and Tyler (myself), you can find that HERE. ( https://www.twitch.tv/videos/304226044 )

Now for this week’s Top Tenish, where we cover the week’s highlights.

We’ve got a lot of different cool systems coming along this week. It’s been particularly interesting to see not only the great performance of building destruction, but also how it behaves, and getting that tuned and improved.

For art this week, we start out with animation. In the below video, we have an out-of-game render of some of the work created leading up to the start of Beta 1. This video first shows a combat fidget created by Joe for the Fianna, then one made by Scott for the Black Knight, who also made a low-occurrence death of the Viking Mjölnir class. Credit for the idea of the Mjölnir death totally goes to Mark, who wants to make sure we have a bit of fun in Camelot Unchained. 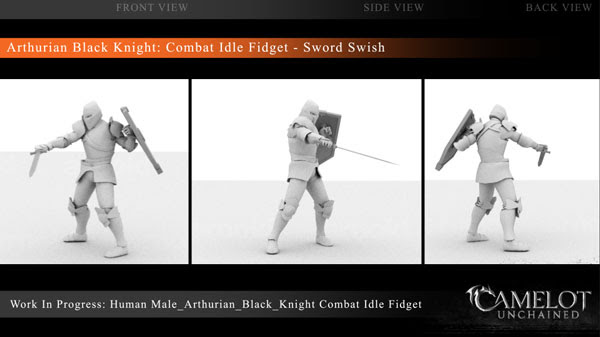 Next up, we have a Viking statue Jon created which rests at the end of the main dock on the Viking home island in Midgard. This was actually based off a real-world design. 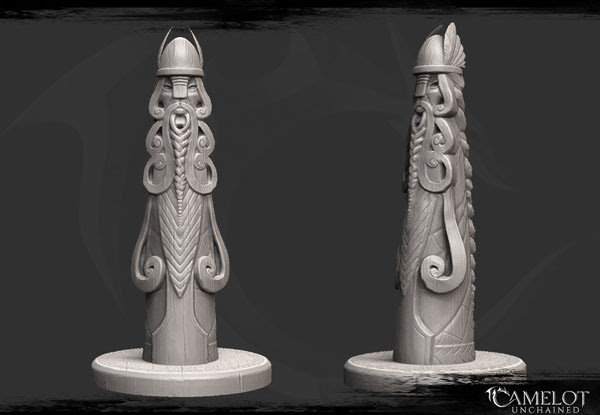 Based off Michelle’s concepts, we wanted Realm-specific lamps for our home islands. In this case, we hadn’t yet created anything really unique for the TDD, so we went with something that looked like it had grown up out of the ground. 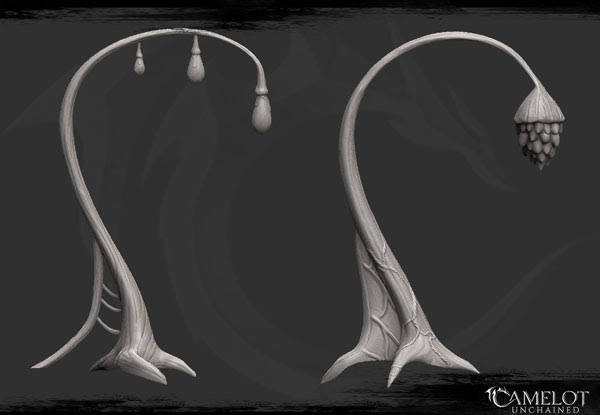 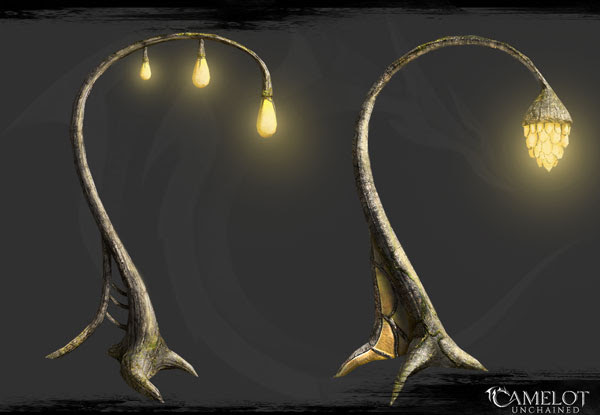 We continued that treatment later for wall-mounted lights. We’ll get these into the hands of players later, as something that can be crafted and placed in or around your building plot. 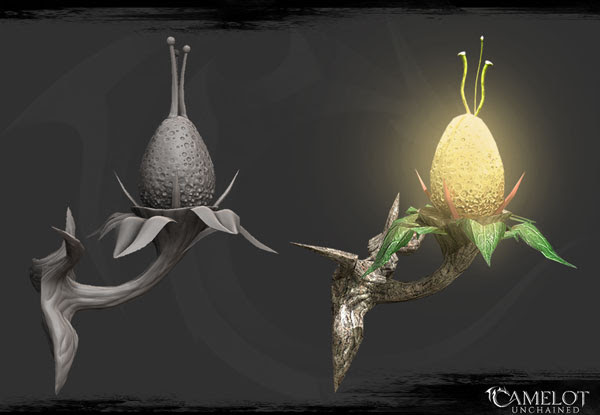 Dionne also made this great fountain! This was something I wanted to get into the home island, but we ran out of space to keep adding props. She took this asset and made three variations, and the largest is pictured below.

Sometimes it’s the little things that add a bit of flavor to the game. In this case, we did a special ability animation for the Arthurian Physician that needed to be more than just “pull out a bottle and throw it.” We decided to use a big jug, and created an animation where he takes something out of his pockets and places it in the jug. Ideally, we can use this single animation for different components. In the end, we had him put a frog in there. Jon pretty much pleaded to make it for us. 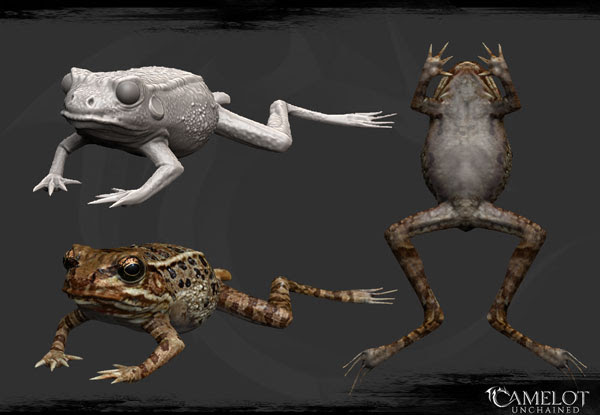 I’m going to wrap up the art section, because we have a bunch of thank-yous we need to cover. Leading up to Beta 1, we stopped doing the end-of-the-week updates in which we thank Backers for gifts they send to the studio. We did that so we could focus on getting into B1. Thankfully, Max kept a long list going! So I’m going to try and cover some of those this week, and I’ll finish up the rest next week. Clearly, there were quite a few gifts, so I just want to start off with a big thank-you from us at CSE! You guys are a wonderful and thoughtful community.

I’m going to lead off with gifts Max received while he was out on paternity leave. Thank you to Lawtoween for these adorable Viking pride onesies! Thank you to Paladin Brewer for the smart sight and sound projector. I’m sure Max will make great use of this on those sleepless nights. Also many thanks to Poxer, who sent the hilarious daddy doo-doo diaper changing kit! 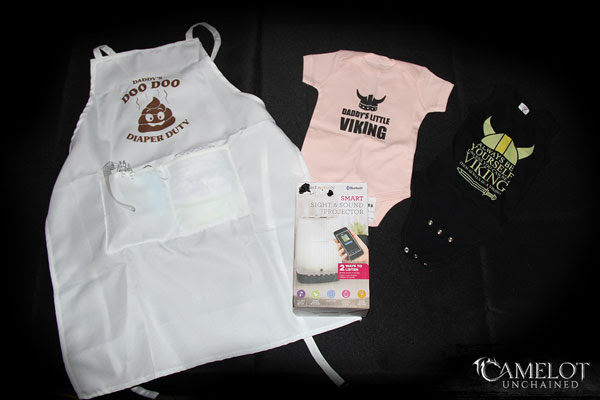 Previously, we had this hilarious … I don’t know what to call it, a bug protection hat? This was gifted to Max by Poxer. 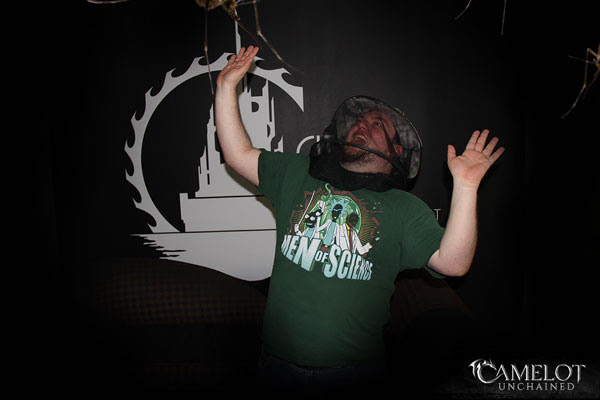 There was this large box of Viking beer soap sent to us from Dinarian & Disparia! We all had a chance to take a bar or two home. I can tell you my wife said, “You have what in your hand? Beer soap?!”  Also special thanks for the well-written, heartfelt letter. 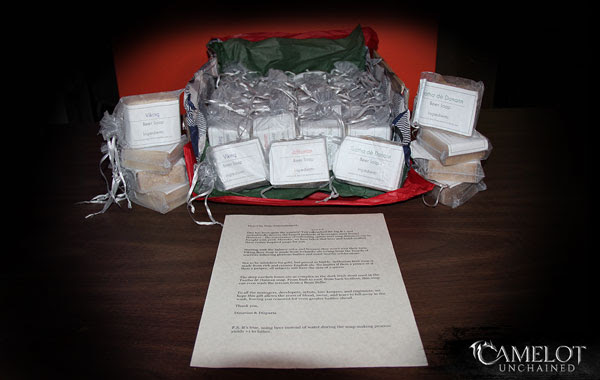 Next, we had these magnets for JB, for all his fidgeting needs, from Paladin Brewer.

To end the thank-yous in this update, Paladin Brewer also sent Michelle this giant gummy bear! I honestly didn’t know this was a thing. 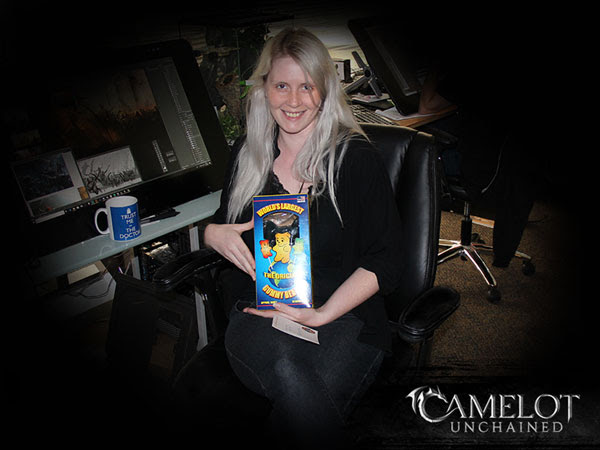 That wraps up this week’s update. For those of you with Beta 1 access, we look forward to seeing you on Sunday’s test. Testing email coming later this evening with more info!  Have a great weekend, all!