We’re wrapping up another productive week here at CSE with a solid list of the week’s progress highlights. If you missed today’s fairly colorful wrap-up with Tim and myself (Tyler), you can catch that HERE. We go over the Top Tenish items, and there’s a fairly “animated” Q&A ,with some of our awesome, and ever-inquisitive Backers. Let’s take a look at what we’ve been up to!

As mentioned in today’s stream, much of this work encompasses feedback and improvements from our preliminary Deathmatch playtests, as well as upcoming tech and art for the scenarios that will take us into and through Beta 1. We continue to focus on making solid progress to the start of Beta 1, while rewarding Backers with more gameplay to make testing more fun. If you haven’t seen our update on SNS and the Dragon Circle detailing this, you can find info in our Beta 1 Document, HERE, or in the latest monthly Unveiled newsletter, HERE.

Let’s move into art for this week, starting off with a different kind of art. Never one to ONLY work on three projects at once, JB has provided a screenshot of some HTML/CSS prototypes of inventory tooltips. For those of you who like stats and info, I’m sure you’ll love these!

Next up, we have some WIP concepts. The first is from James for the Patcher styling, and the other is from Michelle for possible splash images, both for showcasing SNS and the Dragon Circle. 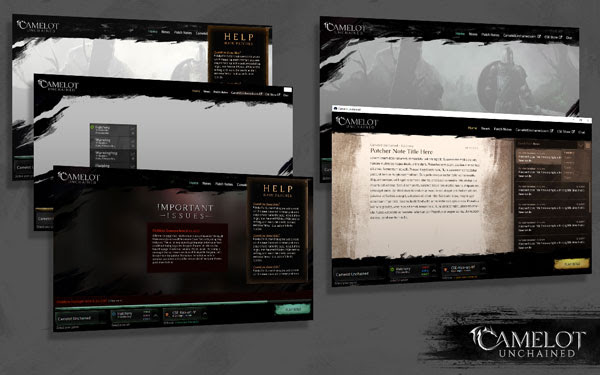 Next up, the first pass of materials on the TDD NPC clothing from Jon.

We finish off the art for the week with a nice beauty shot of Dionne’s Arthurian boat model. This and the background dock assets will help fill out the landing areas of the islands during Beta 1.

That last shot of the boat simply makes me smile. It’s a shot that I hope makes the MMO explorer in you itch to get going. I’m personally looking forward to pulling these assets into some of the upcoming scenario zones.

As always, we thank you for your support, patience, and interest in Camelot Unchained. We’ll CU next week!