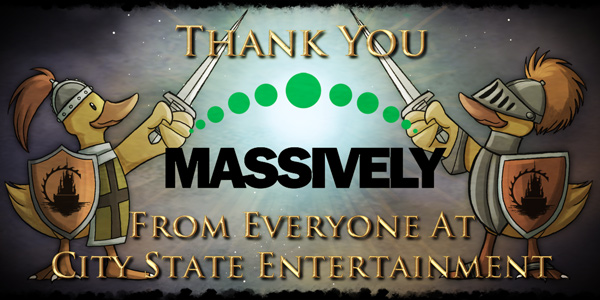 One of the downsides of being a game developer for more than three decades now (it sounds better than saying 30 years but not much), is that you see a lot of friends, colleagues, and special places leave the industry. I’ll never forget Byte magazine (copies of which I still have a stack in some corner), Computer Gaming World (with the great and ever-so-secretive Queen of RPGs, Scorpia, or its terrific bossman Johnny Wilson), Kesmai Corp. (one of the truest and best group of individuals and pioneers in this space) and so many more. One of the consistent things about life: it is ever-changing.

Well, sometimes change is good and true, and other times it is just truly awful on every level. Last week, one of these truly awful events was unfolding, and that was the announcement that AOL had decided that a number of sites, including Massively and Joystiq were going to be shut down permanently. While Joystiq’s loss, as well as all the other affected sites, should also be treated with sadness and respect for the people that worked there, the loss of Massively is a much harder pill to swallow for me on a personal as well as a professional level. While I would love to devote some space to ranting against AOL (though in truth that’s way too easy and ultimately unsatisfying), the folks at Massively deserve better. Must…resist…

First, let me start with the easiest and most obvious thing to say. Thank you, Massively, for your eight years of coverage on our corner of the games industry. We haven’t always agreed, and yes, at times we have thought the other one was, well, flat-out wrong. Yet, through all this time, Massively treated everybody the same. It didn’t matter if you were Mark Jacobs, John Smedley, Richard Garriott, Scott Hartsman, Brad McQuaid, etc., etc., etc., or some unknown guy working from his basement (as I certainly once was). Massively gave you both coverage, attention, and yes, the occasional bit of rotten fruit hurled in your direction. And for all of that—the good, the bad, and the meh—I and every other damned MMO developer should be grateful, especially nowadays. In case those in the cheap seats or in the rarified upper crust of development haven’t noticed, there aren’t a lot of sites that are devoted to MMOs, especially not in the way that Massively was, on so many levels. So again, THANK YOU SO VERY, VERY MUCH!

Now, let’s move on to what made Massively unique.

If you spent any time hanging out at Massively, a couple of things should have become abundantly clear. To begin with, the folks there loved what they were doing. They weren’t playing and writing about games just to earn a living, they were paid for doing what they loved doing, and that is a pretty cool way to spend your life. It can be easy for writers and journalists to get very jaded over time (or simply act like pricks, because, well, they can), but while no site is perfect, I always got the impression that the folks at Massively really, really loved MMORPGs.  They didn’t see their jobs as based on making themselves the focus of attention by racing for the brass ring of snarkiness, or on just being truly awful to any developer or game that they didn’t consider worthy of their time. Now, was snark involved at times? Yep. Did they say things that I and probably others thought were too harsh, or even downright nasty? Ditto. However, in Massively’s case it wasn’t their modus operandi, but rather an occasional rearing of human nature’s head. It was not their job to always be nice, and yes, it was their job to say harsh things at times. We need sites like this to exist, and that brings me to my next point.

As per above, over the course of my career I have seen all sorts of sites come and go. One of the things that made Massively special was the way that they held themselves to a higher ethical standard than many others in my experience. Our industry needs more sites like Massively, not fewer. Over the years, I have watched the state of gaming journalism go through a rollercoaster ride, with big ups and downs. Through its lifetime, Massively has always been a place that wasn’t looking for a handout, a place where people said what they wanted to, and believed in saying, even if it would ruffle some feathers. How can you not respect a place like that, and the people who run it?

What I will also miss about Massively is the people there, both the writers and (believe it or not) most of the posters. As to the former, were the writers perfection personified? Nope. But none of us, developers, writers or posters can ever truly claim to be perfect. And the articles there were generally informed and informative, well-written, and most importantly, came from real passion about the genre. But besides their skills,the writers there seem like genuinely interesting and, well, “human”, human beings. While I rarely interacted with more than one or two of them, I always got the feeling that these were a good bunch of people.

Nowlet’s talk about the community of posters on the site. Some of them were genuine, 100% trolls and troll-lites. However, I found that most of the people that I interacted with on Massively, even some who started out as critics of me, Mythic, WAR, etc., were at least willing to listen and engage. This was especially true when they were presented with someone who wasn’t talking at them, down to them, or through a PR filter, but rather simply talking to them person-to-person, or in my case, gamer-to-gamer. While I have a perfectly awesome forum Community for Camelot Unchained, I will really miss my interactions with so many of the posters on Massively. Even (and in some cases, especially because) if they weren’t Backers of our game, and most likely won’t be, because of the RvR focus of Camelot Unchained™. So to all of the people who made Massively what it was, whether writer or poster, you once again have, as I’ve said elsewhere, my deepest and most sincere thanks.

I think it is well past time to get to a very important part of this missive: what comes next. From the day I heard that Massively was going to shut down, I encouraged Bree and the Massively team to Kickstart their own site. I immediately offered some help on the Kickstarter from myself and the CSE team (art, design, etc.) if they decided to move in that direction.  Now, Bree being Bree, she was flattered but flatly and politely turned down my help due to ethical concerns, even when I assured her multiple times that there were no strings attached. While I would say I respect her more now, that would be a cliché. Also untrue, since I already respected her greatly.

However, considering that when certain game developers, including myself, started their crowd-funding efforts, sites such as Massively, MMORPG, and others covered our efforts (sometimes with praise, sometimes with criticism, and sometimes with both), I can and will still do one thing to help: telling all my Backers who care about the MMORPG industry to “watch the skies.” Pay attention to this space and others if/when Massively 2.0 (or whatever they call it) re-launch happens.

Now, some of you may still be asking: Why I am so passionately behind Massively? It’s simple. As one of the few people who can say that they have been making online games continually since the mid-80s, I have always cared deeply about our corner of the game industry. As the number of sites that are devoted to MMOs dwindle, and the overall coverage of our corner of the industry declines, we, as the players of MMOs, need to do something. We need to support these sites if we want them to survive, going forward. For all of those who came to Camelot Unchained from Massively, or who found other games from that site:  remember that if it wasn’t for them, you might not have found those games. Some games might not have even come into being without sites like Massively.

I hope the day when you can show your support for the folks at Massively 2.0 will come soon. I also hope and ask all the developers whose games have been covered in Massively to point their player base toward Massively 2.0  if/when it appears. They will need our support if that happens, and the best way to give it is to inform our Backers, players, fans, etc., about what is going on, and let them decide for themselves if M2.0 is worthy of their support. I’ve already made that decision myself (based solely on the fact that Bree and company seem inclined to rise from ashes of AOL’s slash and burn), and I hope other developers will as well.

To Bree, Jef, Justin, Eliot, MJ, Mike, Anatoli, Beau, Brendan, Larry, and all the folks from the earlier days and over the years at Massively who helped make it what it was and is, I’ll close with two very simple words: Thank you.

Join the Opposition in our 11th episode while we talk about the impact of mini-maps on games and some various topics that seem to kill the sense of adventure…
Video Rating: 5 / 5