Well, we had a very busy week here! We checked off two important items on our Primary Beta 1 list, we’ve run several impromptu tests this week, we currently have two tests going over the weekend, we dropped in so many changes and bug fixes we had to provide a 20 page testing doc, we have a solid Top Tenish list, and we have a good number of User Stories completed. I’m tired just reading this sentence! I’m proud to be living up to our word to work hard and do what is needed to make up time and get us into Beta 1. If you’d like the more verbose and personal version of the week’s wrap-up, you can catch today’s stream with Tim and myself, Tyler. Next week is already promising to be busy as well. Stay tuned! For now, let’s move on to our Top Tenish list of updates.

13. Misc – Updated German version of the CU website: Thanks to the fantastic work of our translators, particularly Apollon and his crew, with Charles’ oversight, we’ve updated the site. The delay is much more on Tyler’s shoulders as he needed to find the time to sign off on the changes. With the extra time some more translation work was able to be done.

A good amount of work was completed this week, on top of all the features and fixes that went in the previous week. Let’s jump to the User Stories next!

We’re checking off two items this week, with the caveat that we still would like to do more UI support or performance fixes if needed, time allowing. However, the work is complete to support functioning systems.

Items exist in the real world: Can be dropped, traded, picked up by any player, and persist in world. – Complete

As a Backer, I’d like to know about smaller changes that don’t have their own user story.
Buildvar for near clip distance. – Complete
Update follow camera to always point at character’s approximate head location. – Complete

As a Backer, I’d like to see the world of Camelot Unchained continue to develop through its lore.
Picts Becoming part 2 – Final Draft – Complete

As a Backer, I want to be able to own a plot of land and build within it. – First Pass
Expose hotkey combos to slash commands to speed up debugging. – Complete
Buildings encoding and decoding. – Complete

As a server Developer, I would like the user proxies to dynamically scale.
Ensure proxy management lists do not get out of sync. – Complete

As a Backer I’d like a patcher to not only update my game, but also give me the most important news and updates, get support, chat with the community and look awesome while doing it!
Provide feedback when character deletions fail. – Complete
Use the last updated time passed by the client via protobuf. – Complete
Storing downloaded files that are waiting to get decompressed into a
memory-mapped portion of the system pagefile. – Complete
Optimize first asset load of the new patch server by reducing number of queries. – Complete

As a Backer in Beta 1, I’d like to have a sampling of Arthurian light, medium, and heavy armor to wear in game.
Update generic cloak material to use Realm-specific styling. – Complete

As a Backer in Beta 1, I’d like to have a sampling of Viking light, medium, and heavy armor to wear in game.
Update generic cloak material to use Realm-specific styling. – Complete

As a Backer in Beta 1, I’d like to have a sampling of TDD light, medium, and heavy armor to wear in game.
Update generic cloak material to use Realm-specific styling. – Complete

As a Backer in Beta 1, I’d like to play as a Crafter with basic gathering and crafting mechanics for testing.
Resource Nodes:
Ability to override resource IDs on spawned terrain. – Complete
CSV driven data defines quality values. – Complete

As a Backer in Beta 1, I’d like to play in a Party, or Guild – UI.
Ability to create Order, invite others, create and edit ranks, accept invites. – Complete
Build generic components for UI front-end for future re-use. – Complete
Add member count as field for groups in graphql queries. – Complete

As a Developer, I’d like to have a selection of weapons that visually represent each Realm’s identity. – Viking
“Epic valentines” axe model created.  – Complete
Update completed weapons scale to better convey weight and fit better in hands. – Complete

As a Backer in Beta 1, I’d like to be able to pick an item up off the ground, put it in my inventory, and if applicable, equip it.
Optimizing gear slot information sent by packed/fast entity writers. – Complete

As a Developer, I’d like the Camelot Unchained ability system to fully support the design scope of the game for B1.
Health bar heal/damage events are based off of combat events passed from the server. – Complete

As a Developer, I’d like to improve the visuals of our current characters and armor, and note lessons learned to move forward into our next iterations.
Improve Arthurian heavy armor materials. – Complete

As a Backer and Developer in B1, I’d like to see improvements in the visual quality of armor for CU.
Fall Court heavy armor test:
Armor has stats and is available in player inventory. – Complete

As a Backer in Beta 1, I’d like to be able to further personalize my character through the use of the Banes and Boons system.
B&B Icons:
Additional Banes and Boons icons. – Complete

As a Developer, I’d like to pull the physics server out to its own process for improved network performance.
Setup standalone AWS instance. – Complete

We needed a new version of our 1 siege weapon item for Beta 1 as we’ll be using the new ability system, and, time allowing, unique realm versions.

As a Backer in Beta 1, I’d like to use a siege weapon.
First pass: Realm-specific siege weapon concept art. – Complete

Like I said in my intro, we’ve been very busy. Without much ado, as it’s late, let’s move into some art for this week shall we? There’s been a lot of talk around animation recently, as we focus art, tech, and design on it. As we’ve been saying, in most cases this is the first time we are beginning to see our rough animation pass in the game. This quick pass is focused on getting us into combat testing sooner rather than later, as there are a lot of weapon combinations we want to support. Right now we’re looking at what we can do to make the animations, and the supporting system better. However, that hasn’t kept us from finding a great screenshot along the way. Here we have a mighty Arthurian and a fierce Viking warrior duking it out, just as the sun begins to rise! 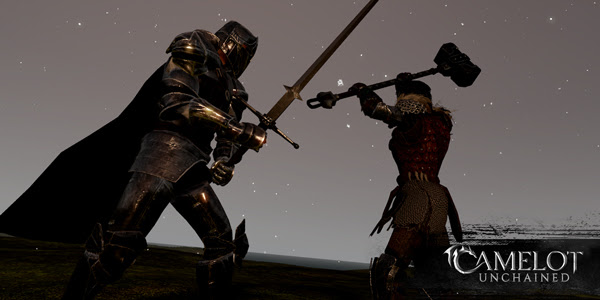 Next up we’ve got some first pass concept art for ballistas with a bit of realm specific “arting” on top! Wonder what we could use these for? 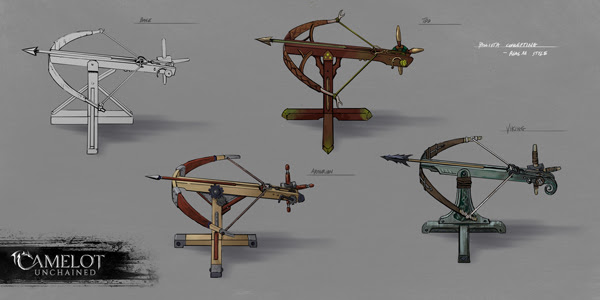 Mind you these fun designs are literally first pass, and we’ve barely started! Good job Michelle! Next up we have some statue ruins that we’d like to use in the environments of CU. My personal goal is to have these assets spattered about the world as unique things you can come across to add life to the world. This week Jon spent some time figuring out better, and faster ways, to create the weathered materials you see here. Thank you Jon for that extra bit of time and effort! Look for these moss and grime covered behemoths in the forests of CU. Oh, yeah, I plan on making ’em pretty big. You guys need some good photo op locals to show off your armor and gear right? 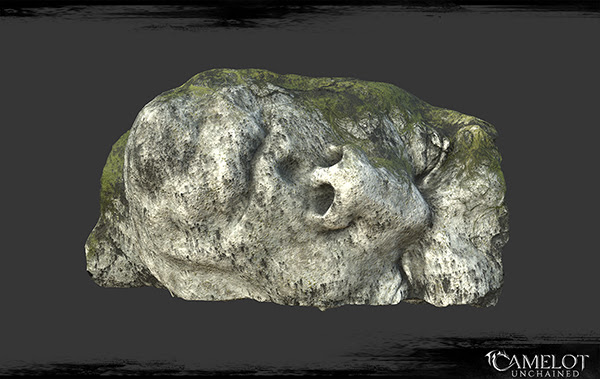 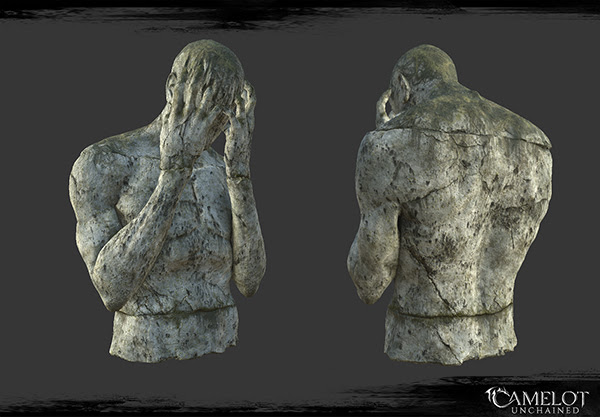 Lastly, we close out with a render of the Valentine’s day axe Michelle created concept art for, during her holiday stream. Jon started on this on the sly, over a weekend, as I wanted to surprise Michelle, but she found out! So what started as a joke on her stream, is definitely going to be a fun item for testing in B1. 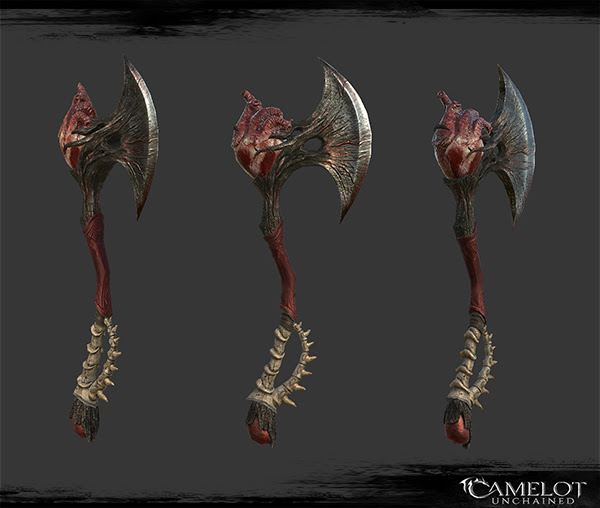 Well that’s all folks. I truly hope you have a great weekend, and I very much hope you can see by our updates, that we’re doing our best to make each day count!

P.S. It was such a busy day so I had to get this update out pretty late. There’s no grammar and spelling, and blasted comma check from Max. Enjoy my grammar!