Welcome to the final update of the year! It’s been a heck of a turn around the sun at City State Entertainment. We’ve had ups and down, highs and lows, and through all of that we’ve emerged as a stronger team with a better engine, well-positioned for the next year. I’ve said from the beginning of the Kickstarter on that we had the best Backers in the crowd-funded part of our industry. You’ve been generous with your donations, patient with our delays, and even more generous with your time and efforts supporting the studio and the game that we are making together: Camelot Unchained. As always, thank you all very much!

Before talking about all the great game news, I want to take a moment to truly thank all our Backers on behalf of CSE, and also say a special thanks to some of our Backers who have gone above and beyond in helping us in our efforts. Whether they are part of the Mod Squad, or just sending us yummies every so often, the efforts of you folks are much appreciated. So, we would like to send a special thank you to Mehuge, Gorjim, Saddie, Grimmlet, Agoknee, Rigowen, and Zamalek for their work in Mod Squad, to Foggye for heading up wiki updates, to The Pendragon and Tirudan for German translation, to Pouloum and others for French translation, to Harkrom for Italian translation, to Ichor for making video tutorials, to Endoria for quick German language help on social sites, to Oakblade for so helpfully answering questions on the forums and being positive, to Necromaniak for helping new CUBErs, to Ortu for adding to the ability builder UI, to Failboat for so many yummies and spirit-lifting gifts, and to so many more of you for all your awesome help. We love all you guys and gals, but I would be remiss if I didn’t thank these folks publicly for their efforts.

Now, as for the game. Yes, I’m now starting to call it a game, because as you saw on Tuesday, our engine is slowly evolving into a game. Over six hundred Backers and Bots were happily doing battle around the center of our test island (in a small space, surrounded by a dense pine tree forest meant to push the system), and performance was, as you folks saw, outstanding.

As we’ve said before, these Bots are even more resource-intensive than an average player. These Bots aren’t NPCs, they are separate versions of the game PC client that we spin up to do these tests. They actually consume more bandwidth, as they have more actions per minute than most players, and they never rest. With the planned optimizations we have in our schedule, we’d like to see if we can smoothly support 1K players in a small battle area by the opening of Beta 1.

BTW, during one of our impromptu tests we hit 3K Backers and Bots in that same small area before our physics system finally begged for mercy.

Oh, and as Tim told you during the stream, he’s not even running on an Nvidia Titan or dual cards. Supporting a lot of people in large-scale battles doesn’t mean anything if you have to have a super-charged rig in order to enjoy them!

Also, during our many tests, some folks commented that they loved the performance of the game, but were worried that because we seemed to only be using a handful of different models, the game would run much slower when we added the game’s real models into it. So, we made the bots have unique, constantly-changing models and textures for yesterday’s test. As we said during the Kickstarter and beyond, we weren’t “cheating” this way when Andrew designed and coded the earlier version of this engine, and yesterday and today. ( https://www.youtube.com/watch?v=PvgjEMPfkYs ) we proved it. I love it when that happens.

Given the movie that just opened, I’m tempted to say “I find your lack of faith disturbing” but given the amount of B.S. that happens in the game industry, I can’t blame people who wanted to believe we were “cheating,” no matter what I said. Well, hopefully what you saw yesterday puts that issue to rest, forever! Yeah, the tinting was festive like a Christmas sweater, but it was there, along with 600 Backers and Bots, putting on and taking off different pieces of equipment during the test.

Besides the Big Bot Battles, you saw our latest pass on one of the new biomes for the game. After all, you didn’t think that our game was just going to be giant fields with a few trees here and there, did you? As always, we are creating these assets ourselves (specifically for our engine, because we didn’t simply use Unity or Unreal), but as you can see, things are moving along nicely on this front as well. The build becomes a world, and the world becomes a game.

In the stream of last night’s test, you saw 600+ Backers and Bots running around a small space in this new area of the world, with the vast majority of them being in your viewing frustum. Ask yourselves how many other games you’ve played where you could even come close to that number. Last night, we demonstrated that we could do what we set out to do: provide large-scale battles to our Backers without it being a slideshow. And we did it in the latest biome, a thick pine forest, and it ran great. It only gets better from here! 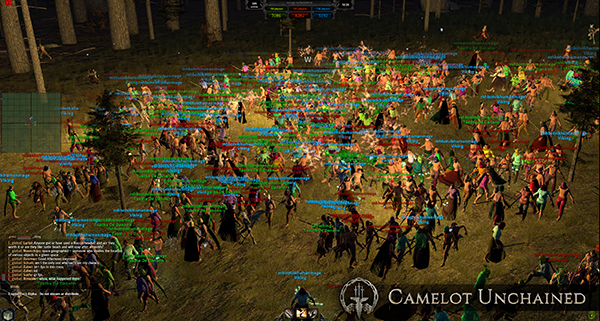 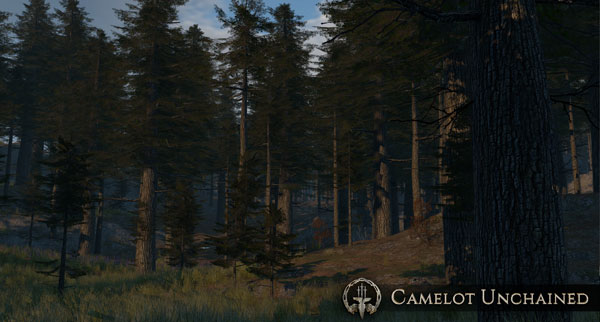 Wonder where we are going with the world’s look and feel? Well, here are some pieces from Michelle and Sandra to show where that inspiration has come from. Let’s start with the Arthurians. 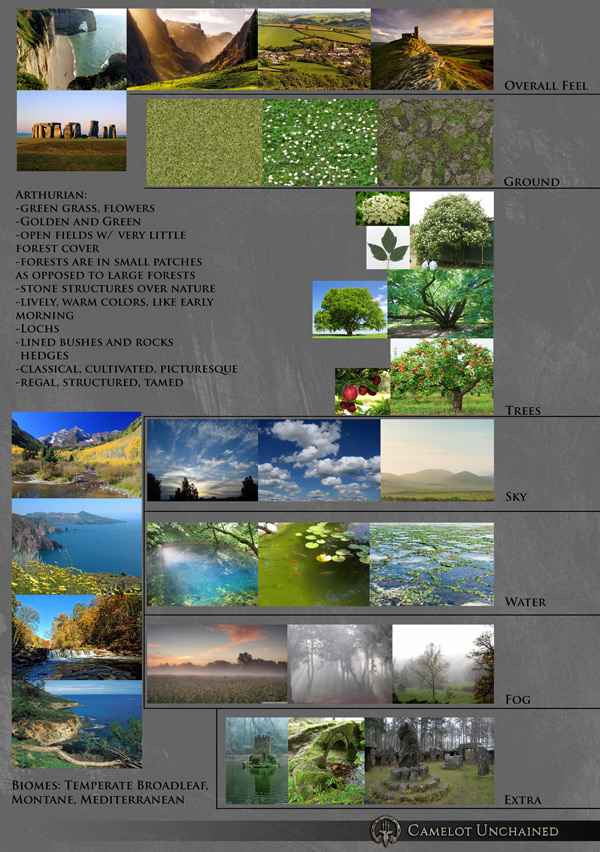 Next, the Tuatha Dé Danann. 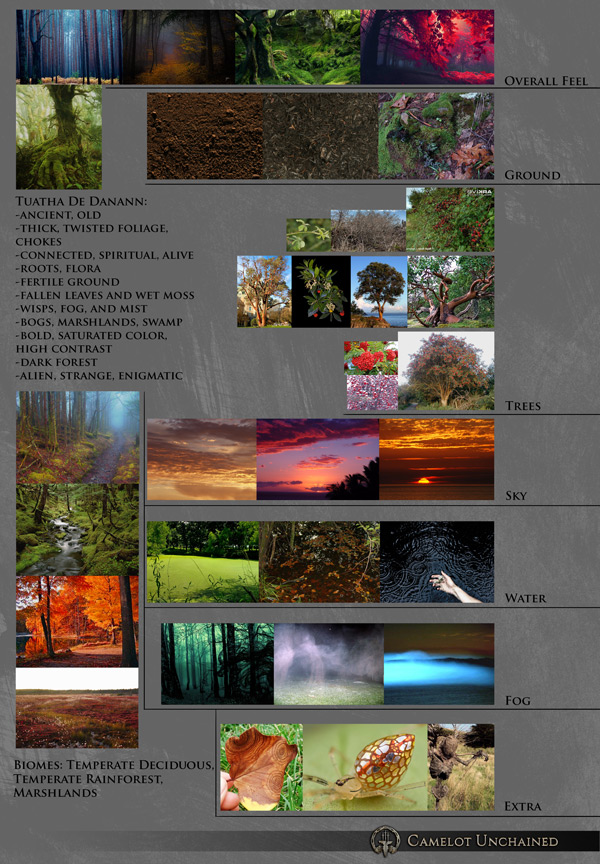 And last, but certainly only least alphabetically, are our VIKINGS!

Besides all of that great technical progress, Tuesday saw a long-awaited reveal on crafting in Camelot Unchained. Besides the great coverage that we got from MOP ( http://massivelyop.com/ )and MMORPG ( http://www.mmorpg.com/ ), I was pleased to see/answer the questions (and of course, praise) that we received from folks. In case you didn’t see it, here’s a link to the presentation (http://camelotunchained.com/v2/wp-content/uploads/2015/12/Crafting-Presentation-Part-Deux.pdf).

Like combatants, each of our crafters will have a unique look. Here’s a TDD crafter who happens to be a Silverhand. 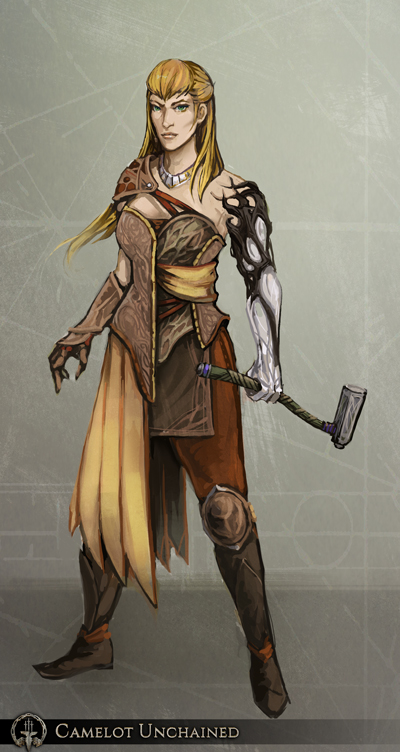 Next up, an Arthurian.

And not to be outdone, here’s a look at your friendly neighborhood Dvergr! 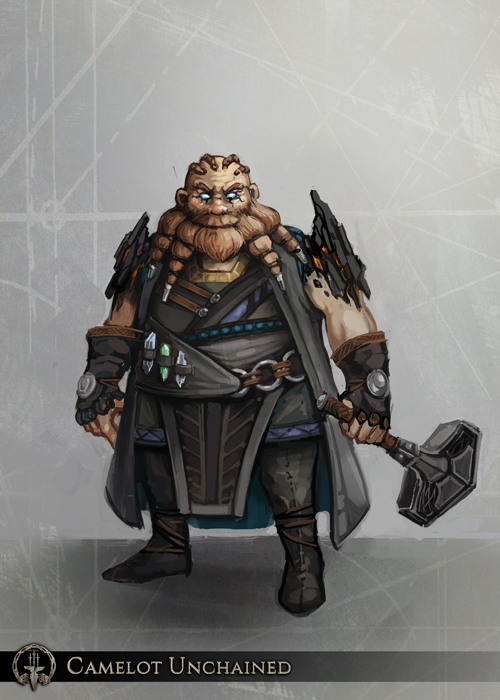 Just as combatants need their weapons, crafters need their tools, and here is some concept art on their hammers. 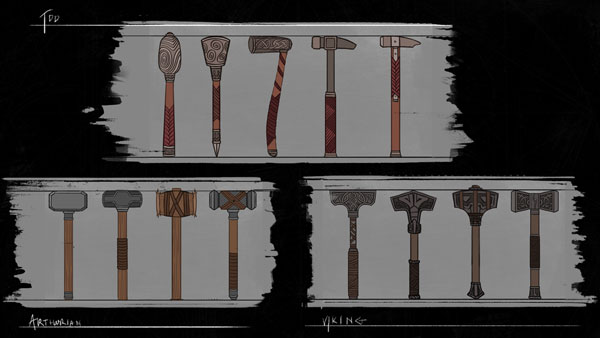 And while that covers “Hammer Time, CU style”, the main tool that our crafters will have is their Vox Magus. The crafter presentation covers both the origin of the Vox (as a souped-up pipe organ)… 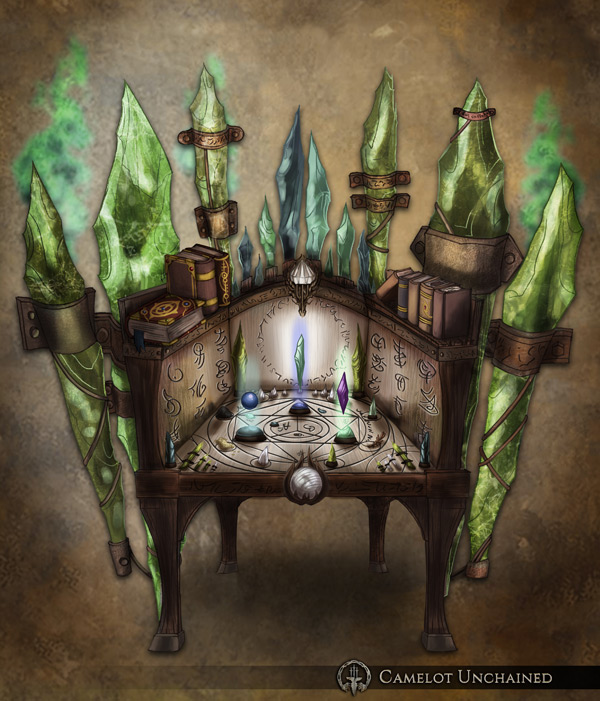 …to the evolution as it now stands, which is one badass combination crafting station and mini-factory. Here’s a concept piece for a prototype UI. 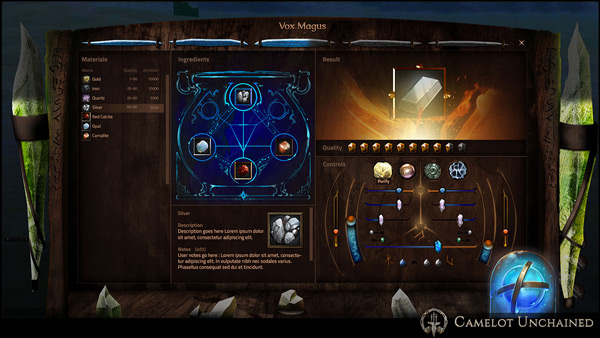 As you can see from the UI, the crafters are going to have an intuitive interface that will be part of a highly interactive system, whether it is for Taking (gathering, harvesting, farming, mining, etc.), Purifying (refining), Shaping (making alloys, altering the physical characteristics of the purified materials), or Making (assembling the items). But as always there’s a lot more, and you’ll find that in the crafter presentation.

It is my goal to create a crafting system that will stand the test of time, one that will be remembered as fondly as some of the other great crafting systems in our industry. I hope you all agree that we are moving in the right direction. My gut tells me that we are, and based on everything that we’ve been hearing since the first BSC Daze, our Backers agree.

Besides crafting, we will have a Merchant Guild, Crafter Guild, and of course, to haul stuff around, giant snakes! 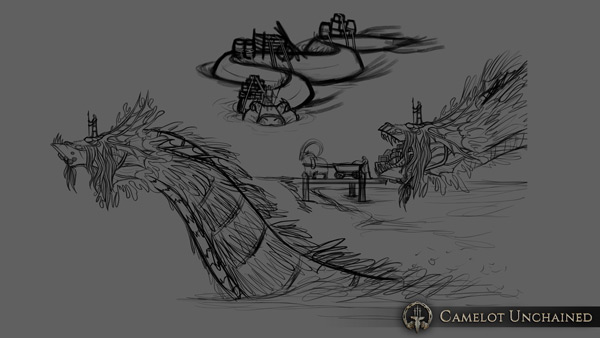 Who needs snakes on a plane when you have planes on a snake, right? 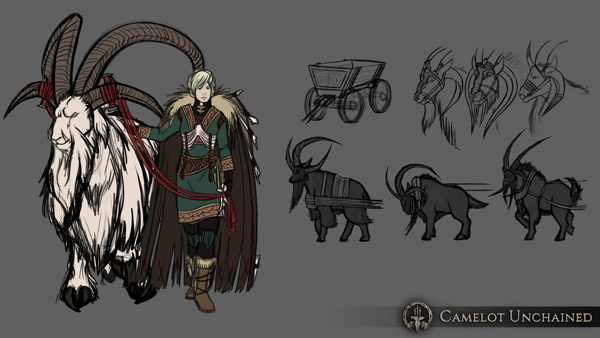 All joviality aside, our caravan ideas are just a little BSC, but they should be fun and profitable for both attackers and defenders. There’s more information in our video presentation and the crafting document, which will be posted to our Forums before the end of the year.

Hmm, what could be next, I wonder? Yes, it’s User Stories time. And here is an update on them. There’s some pretty good stuff here. There were 23 existing cards with 73 completes, as well as 4 new cards with 22 completes.

As a developer we continually need to update our software.

Revise all code to be compatible with Visual Studio 2015 Update 1. – Complete

But we have also been busy in other areas as well! We’re making progress on a newer, spiffed-up website, and here are some of the mockups for that. Take note that we will of course update these with images of our newer, better, prettier models, so don’t think that this is the final look!

Jon has been doing his usual great work on models, and here are some updated looks for our male and female Valkyries. First up, some concept art. 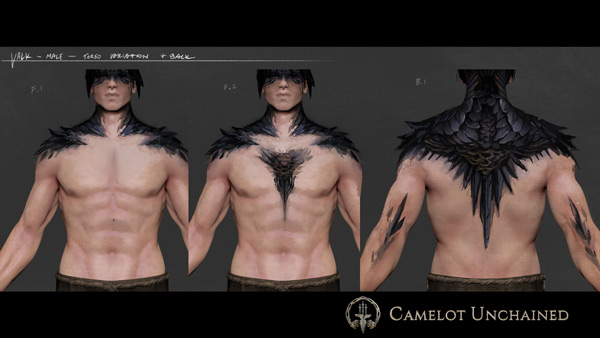 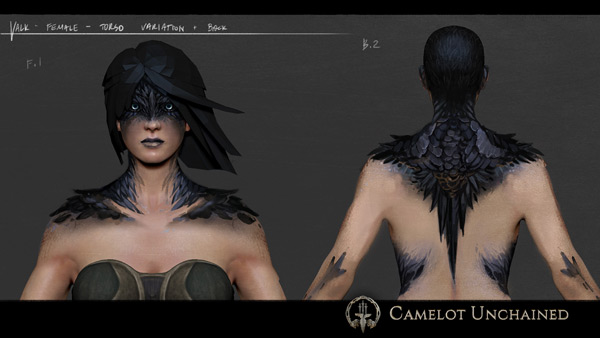 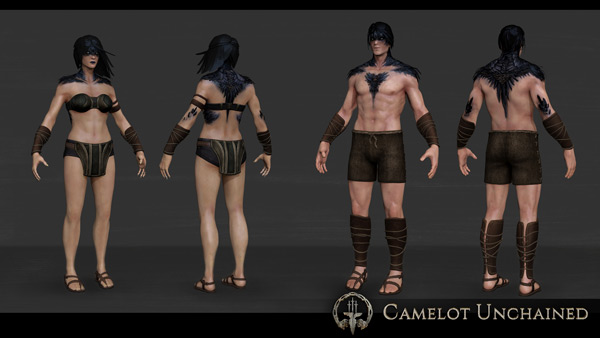 And, well because people have asked about trophies and other uses of certain parts of their enemies’ anatomy, here’s a cheery image! 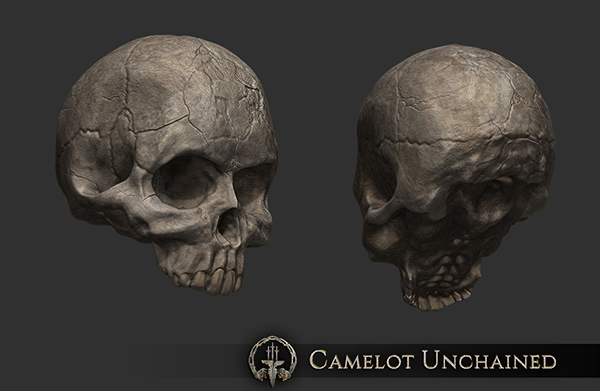 And some wisp concepts by Mike! They of course look better animated!

So, I also want to take this time to acknowledge the efforts of everybody at CSE for their outstanding work this past year. This team has never wavered in their efforts to make a great game, and their work, whether as artists, community managers, designers, engineers, production, or writers has all contributed to make Camelot Unchained what it is today, and what it will become. I have been and will always remain proud of their efforts, and I feel privileged to be able to come into the office every day and work with such fine people. They have my love and respect, now and forever.

And an extra special shout-out to my studio co-founder, partner, and friend Andrew Meggs, for the many roles he fulfills on the team, besides being an awesome engineer and the most human of beings. And also, an extra nod to our turtle-loving producer Tyler, whose patience, warmth, and desire for hugs (which remain unfulfilled from me) are a key component of keeping this team sane.

And now, an additional thank-you to all of our Backers. Whether Founder or Builder, it is thanks to you that we are where we are. Your generosity, support, and kindness have meant so very much to us. We wouldn’t be here today if it wasn’t for you, and as I always say, we thank you for that. Speaking on behalf of everybody at CSE, thank you for your support, and we will never betray your trust. Camelot Unchained is the game you helped bring into existence, and when the new year begins, we will be hard at work bringing the game, and not just the engine build, to life.

Merry Christmas, Happy Holidays, and most importantly a safe and Happy New Year to all of our Backers, friends, and families, no matter where you are in the world. As a little present from us at CSE, Michelle put together some desktop wallpapers out of the class reveal images! Go here for the wallpapery goodness: (http://camelotunchained.com/v2/media/wallpapers/)

With respect, love, and my deepest gratitude,