Another fine week nears its end here in beautiful, downtown Fairfax, Virginia. Well, at least if you don’t mind the heat, humidity, and pollen aggro! OTOH, work progressed really nicely on a lot of fronts. Before talking about the new stuff, let’s do a quick recap on some of what we’ve talked about earlier, for those who missed what happened last week.

We announced the Backer Rewards and Subscriber Rewards. While the latter is still far away (we don’t start subscriptions till we go LIVE), this plan reemphasizes just how grateful we are to those that have backed our game. We have never and will never forget that without you Backers, none of this would have been possible. These rewards are focused on those who have steadfastly backed us, whether those who were there from the beginning of the Kickstarter or those just hopping on board now. Loyalty should always be rewarded, and we are going to do exactly that.

We announced the current stretch goal, Stealth Unchained, with two (possibly three) new archetypes for our game, as well as laying out the basic vision for the camouflage system. The reaction to the stretch goal and the new archetypes has been outstanding. The stretch goal is moving along nicely, and the comments on the Forums have been heavily in favor of these additions, even from people who don’t normally play stealth-using characters. Personally, I think the addition of the Scouts is going to be great for RvR, and will inject some really unique and interesting gameplay into the game.

We also talked about our new terrain system/editor that Andrew has been working on for the last few weeks. In the short term, it really is a game-changer for us, as it dramatically reduces the amount of time that it will take us to create the world of Camelot Unchained. In the long term, the procedural nature of the system will help fulfill the vision we have had since the Kickstarter about how the land of the game will evolve over time.

Now, for this week’s update, we have more good news for our Backers. Let’s start with the latest addition to the CSE family, our character artist Jon Young. While Jon hasn’t had decades to fill out his resume yet, the work he has done so far shows his potential. For example, here’s a before and after look at our Frost Giant model. 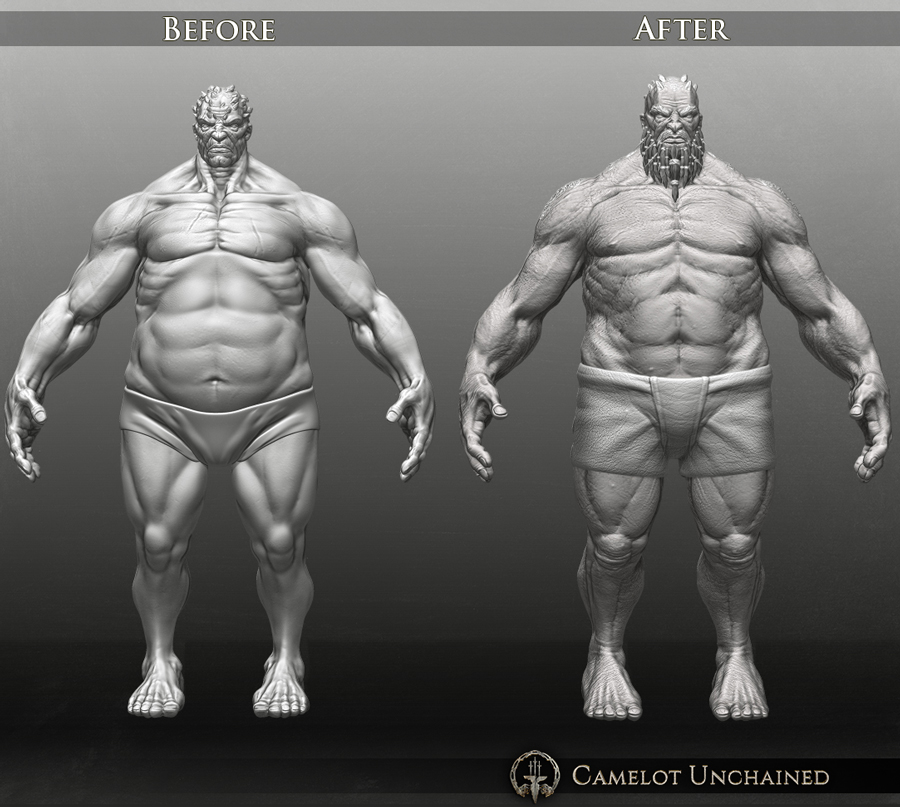 Nice work, eh? Especially for the short amount of time he spent working on it. So, welcome aboard Jon! We can’t wait to see what he does next. As Backers, you can expect to see a lot of changes and additions to our models over the coming months. Good times!

Next up is a really fun announcement, one we hope will turn into something quite meaningful for our Backers. Over the last few weeks, we’ve been talking with the Backers on our Forums about an initiative that is aptly named “The Mod Squad”.

No, not this Mod Squad!

We’re not talking about the 1960s/1970s show, and especially not the 1999 reboot; instead, this is something far more useful for our game. As everybody who has been following our game from the beginning knows, one of our relatively unique features is how Andrew had the really cool idea of “building our entire UI out of the web” via Chromium, as he said here. And ever since then, we have been working with some of our Backers to help lay out a framework for current and future mods, while at the same time, helping them build some really useful mods for the game. Now that things are moving along nicely with other aspects of the game, it’s time to take this thing to the next level. So, to facilitate that, we are creating The Mod Squad for Camelot Unchained.

The Mod Squad, or TMS for short, is a joint developer and Backer effort, led by our lead spaceship engineer (he loves that title) JB to take modding to greater levels of awesome. While JB will be holding a live streaming session this weekend, the key things that our Backers need to know are:

So, if you are a Backer of Camelot Unchained who wants to be involved in this effort, please head over to our Forums to join the team as it forms. This isn’t quite an “Avengers Assemble” moment, but we think it could be very cool for those who participate, and also improve the game both in the short and long term for our players. So, grab some 1960s righteous threads (term for clothes, for those too young to remember the 60s), and head over to our groovy Forums to join TMS! 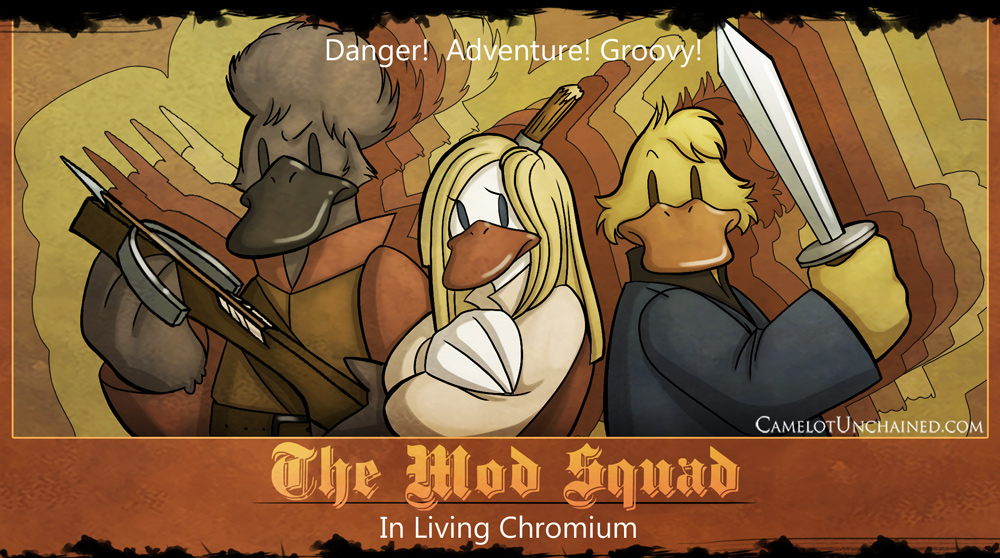 A couple of weeks back, I told our Beta 1 Backers that they were going to be able to access select Alpha tests. We also said that one of the ways we were going to help make up for the delay was by opening the servers for longer periods of time for our Alpha folks, as well. As such, I’m pleased to announce the first round of Friday Night Fights!

Twice a month, starting tomorrow (8/7/2015) at noon our time, we are going to open our servers to Alpha, IT, and Beta 1 Backers to furball it up in our current build. Over the course of this Extended Alpha, we will also be working with TMS to add some fun stuff for the Backers who want to participate in FNF.

The FNFs are currently planned (subject to change, our needs, etc.) to run every other Friday, during the length of Extended Alpha. The FNF will start in the current map, and then be shifted over to the first iteration of a map created with our new terrain system.

Now, this may sound a little bit like marketing, a little bit like hype, but actually (other than the name), it really isn’t. Just like the P.A.T.s, if Beta is going to be delayed, we damn well should make the most of it, and thank our Backers for their patience. This is a way we can accomplish both. By having more Beta 1 folks in our testing group, we’ll get bigger matches, more PC builds tested, and more fun stuff happening. Yes, it is still an Alpha build, but throwing fireballs at walls or enemies and launching Luchorpán (and soon, destroying buildings) is fun.

Plus, once we migrate over to the new map, our Backers will see everything begin to unfold into a richer, more vibrant world, and not just an engine build. Also, depending on how things go, we might also find the time to run and live stream some matches. The FNF will last for 24 hours, so all of our Beta 1 folks can join in the fun and frolic. Again, we’re planning on opening the servers to all Alpha, Beta 1, and IT folks tomorrow, 8/7/2015, at noon, our time.

For our Alpha testers, as soon as we get the new world map in, we plan on having the servers up for 72 hours, every weekend that there isn’t a FNF. This won’t affect our Impromptu Alpha Tests (of which we have a ton), or other Alpha tests during the week, but we know that a lot of our Backers don’t have much time during the week to play, so we want to give them lots of opportunities to play in the most current and stable build.

But wait, there’s a little bit more! I just wanted to add that all over CSE (which in all fairness, is a pretty small office space), things are moving along well. Whether you look at our new folks coming up to speed nicely, Andrew and his magical terrain system, improvements and bug fixes for stances, ability system, rendering optimizations for buildings, class presentation and animation system or more, it has been a great week, and things are really looking good.

That just about wraps up today’s update. For our Beta 1 Backers, I hope you enjoy the Alpha Engine Build, and I urge you, please read the rather lengthy Alpha Manual. It has a lot of very useful information that will save you time and effort in figuring out what the heck it is you are doing in the build. So, once again, please read the manual, which can be found in our Forums or via the patcher!

CU in the engine build tomorrow!

P.S. Depending on how things go tomorrow, I may be able to sneak in (sorry) a Q&A live stream on stealth. No promises, but I’ll see if I can fit it in. It will be a busy Friday.