Happy Friday, all! Another week has passed, and as we approach one of my favorite holidays of the year, I have another great update for our Backers. As usual, let’s start with as little preamble as possible.

Today’s Fall Trio Reveal (https://www.youtube.com/watch?v=kGDio14FOCc) was a lot of fun, wasn’t it? Shapeshifters! Surprised? Based on what we had been reading on the Forums, we thought there were going to be a lot of surprised people during this stream, and we were right. This trio, I must admit, is one of my favorite class trios in the design. A shapeshifting bunch of badass boys and girls like the Enchanted Knights, Children of Loki, and the Black Riders belongs in the world that we are creating, don’t they? And the best part, from my perspective, is that once again these classes are based on the lore, mythology, and legends of our three Realms!

Even more than usual, all three of these Realms have a lot of lore surrounding shape-shifters and the role that changing shape has in important events. Now, we are putting our own twist on these stories, but the fact is that for the lorehounds among us, bringing something like the Dullahan to life as a playable class is very exciting. I can’t wait to play them! Unfortunately, we are all going to have to wait a while for these folks, because they will not be added until after launch. As we said during the presentation, we had hoped to make this class an upcoming Stretch Goal, and you can just imagine how tempting it is for us to do so. However, we have no right to make that kind of Stretch Goal until we are locked in for launch. OTOH, it does give us more time to get them “just right,” and we certainly won’t have to rush them in post-launch. We’ll have the time that it will take to balance these folks out. FYI, since this has been asked on the Forums, these classes are slotted in after all the stealth-based classes, as well as spirit pet classes. For more information, head over here (http://camelotunchained.com/v2/class-reveal-shapeshifters/). 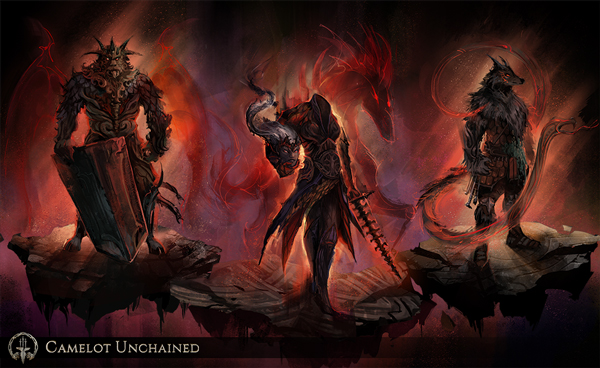 Another subject that came up during the reveal are the Backer’s Rewards. I started a discussion on our Forums (look in the Something to Think About section) about our initial plans, asking for feedback, suggestions, etc., and we certainly got exactly what we were looking for there. Special thanks to Ludovic, who went all BSC with suggestions, and I think set a record for most useful posts in a short amount of time. Some of his and other Backers’ suggestions have been put into my spreadsheet. We hope to unveil the final vision for this system next week, and add them to our Beta checklist. I’m glad to see the overwhelming support we have received from all of our Backers for these pre- and post-launch rewards for all of our Backers and our players.

In terms of User Stories, you can see how much progress we’ve been making from our updates! Lots of new stuff added, bugs quashed, and everything moving along really nicely. Today’s update count: we had 46 completes on 20 existing cards and we also added 10 new cards with 23 completes.
Existing Cards:

As a Backer, I’d like to be able to damage, and ultimately destroy structures in the world.
First pass: Building metrics – Complete

As a Backer, I’d like to play in a procedurally-created environment. – Third Pass.
Terrain changes mods based on capture point ownership. – Complete
Don’t allow players to connect while server physics is still starting up. – Complete
Fix Models 2.0 system so multiple models can share the same source without drawing multiple items in world. – Better frame rate! (Bushes test in update.) – Complete

As a Backer, I’d like to see the world begin to be propped out with generic fantasy items. – Set #4.
TDD medium box. x2 – Complete
TDD medium basket. – Complete

As a Backer, I’d like to know about smaller changes that don’t have their own user story.
Track down and fix persistent bug with a small group of people concerning their ISPs shutting down their connections. – Complete
Fix UserProxy crash with unresponsive clients or bots. – Complete

As a German Backer, I’d like to visit the German version of the Camelot Unchained website.
All lore translated. – Complete

As a Backer, I’d like the movement sounds of my character to convey the gear I’m wearing, my race, as well as the environment I’m in.
Giants use heavier footsteps. – Complete

As a Developer, I would like easily searchable server logs that are the front line of finding problems.
Route logs into Elasticsearch and Kibana. – Complete
Update our logger to accept arbitrary objects for easy fast logging of detailed data. – Complete

As a Designer, I would like to know gameplay information about the state of the game.
Find a good append-only data store. – Complete
Find a tool to search the data store with relevant questions in a mostly-natural way. – Complete

As a Developer and Backer, I’d like to see improvements in lighting and rendering.
Convert to higher-quality normal mapping format. – Complete
Optimize duplicate constant variable setting (speed up shadows and rendering.) – Complete

As a Backer, I’d like to test the male Silverhand model.
Concept pass 1 – Complete

As a Backer, I’d like to test the female Silverhand model.
Concept pass 1 – Complete

As a Backer, I’d like to see the world begin to be propped out with generic fantasy items. – Set #5.
Create documentation for assets. – Complete

As a Backer, I’d like to have more payment options in the Camelot Unchained store.
Investigate alternative methods and present action plan. – Complete

As a Backer I’d like a patcher to not only update my game, but also give me the most important news and updates, get support, chat with the community and look awesome while doing it!
Design new patcher layout: Primary interface, on-patcher chat, and news and patch notes. – Complete

As a Developer, I’d like to reward our Backers for their continuing support of Camelot Unchained.
Conceptualize system. – Complete

As a Developer, I’d like to see improvements in the editor to facilitate my work.
Set up a Delete repository in the editor so work is not gone forever. – Complete
Add build var to the client to not draw the water plane by default in viewer. – Complete
Mesh group materials: Ability to group select and edit material assignments. – Complete

As a Developer, I’d like to improve some of our fundamental tech to improve client performance.
Allocate memory from multiple threads without thrashing. – Complete

Not bad, eh? We’ve been thrilled with our new team members, and we thank all of our Backers for making them possible, through our Stretch Goals. You folks paid for them, and they have lived up to our expectations.

As for other stuff, all the final approvals on swag are done, and the final touches are being put on the store by our partner. We will have a separate announcement on this soon, and when you head over there (as we hope you will), you’ll see that the extra effort we’ve made was worth it. For now, we will be offering two different posters, one t-shirt, and one sweatshirt (hoodie, front zipper) for you. We’ll expand our offerings based on Backer support, but everything will be done with top quality, not rushed, and as close to perfect as we can make them, as well as with your experience with our partner in mind. For example, our t-shirt has front, back, and shoulder printing. No cheap, quick, “make a fast buck” stuff from us, never, ever. And, of course, we will use 100% of our profits from the swag to meet whatever the current Stretch Goal will be, when we receive the disbursement from our partner.

On the art side, the team has been doing a great job on delivering Beta-focused items, whether it is on armor, female characters, etc. I hope you enjoyed Jon’s live streaming of his work on the female Fir Bog, which you can find here (https://www.youtube.com/watch?v=qSlwoX5urc8). Here’s a fun, Fall-themed piece of art from Michelle and Sandra.

And here’s an update on our female Golem, from Jon. 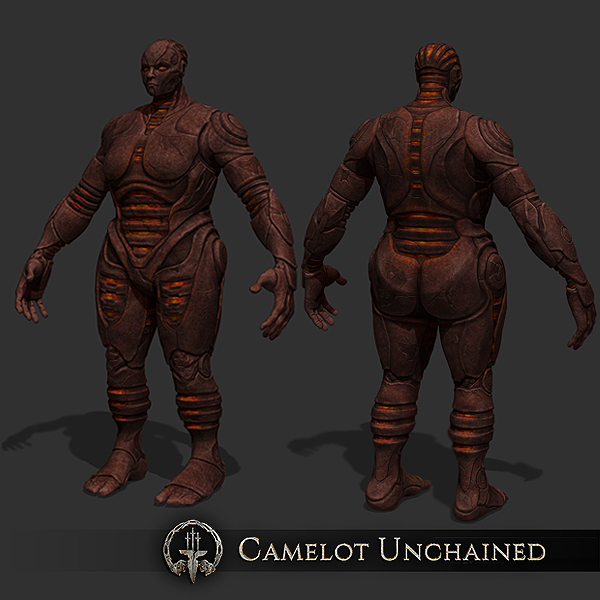 In other news, we’ve updated the tools we use to produce the game to make our engineers more productive and our client more performant.  This changes some of the low level libraries required to run our game, and you’ll need to have those installed to run the game.  We’ll be releasing an updated installer which will install these libraries for new users, but if you’ve already installed the patcher you’ll need to download and install them yourself.

This weekend’s testing is a going to be a “two for one” or, as we used to say growing up, a twofer. We believe we tracked down last weekend’s crashing bug (it was the bots!), so we are already running a “72 hours of Alpha, Beta, and IT” weekend on Wyrmling. And not to be outdone, our Hatchery branch will also have a “72 hours of Alpha and IT Testing” for the current build, since it has some very important new additions (like Andrew essentially re-writing the core memory system for the game), that we really want to test this weekend. So, come on in folks, and help us test/break stuff on both server clusters. Tl;DR Hatchery/Wyrmling are now open for business!

More info in the emails sent/sending to our Alpha, Beta, and IT-folks. This is what a crowdfunded game, and dedicated access tiers, should be all about, right? Lots and lots of testing, feedback, etc. And the best part? We are, as always, focused on building working code and fixing things first, before moving on to the sexier stuff. This is how you craft an engine and technology that is built to last, and we will not waver in this approach.

Well, that about wraps it up for today’s update. As always, we thank you for your support!