Happy Friday, all! Not to be a broken record, but it was another great week at City State Entertainment™! The code base continues to evolve, bugs are being squashed, outstanding artwork flows from the team like a dragon’s tears, stealth is now confirmed for the game, and the march to beta continues unimpeded. So, let’s start breaking this down.

First, stealth is now officially confirmed for Camelot Unchained™! Thanks to our Backers, we are going to have our own unique, challenging, and most importantly, fun, fun, fun stealth system in the game. If you haven’t seen the initial Stretch Goal, it can be found here (http://camelotunchained.com/v2/stretch-goals/). I couldn’t be happier about the completion of this particular Stretch Goal. So, once again, thank you Backers, new and old, who helped make this happen!

Secondly, we have announced our latest Stretch Goal, Send More Programmers, and set it at $ 250,000. Last week, during the livestream, I told our listeners that for now, our Stretch Goals will focus only on hiring Stretch Goals to speed up the development of the game while maintaining the planned feature sets, quality, etc. Let me be very clear on this: these programmers’ jobs will be to work towards speeding up our internal date for launch, not to make our current date for the opening of Beta (unless we got incredibly lucky and found them very quickly).

In other words, we are not saying that we need these programmers to make our current date, but rather to speed up the game’s development. We’ve been very clear that we are not interested in making “The Once and Future Game” that never quite gets to shipping to our Backers. We are focused on making the game that our Backers have already donated to, and our future Stretch Goals will be geared to making that happen sooner, rather than later. So, expect a steady flow of hiring goals until we are locked into our release date. I have not forgotten Foundational Principle #15 (http://camelotunchained.com/v2/foundational-principle-15-stretching-is-good-for-the-body-but-be-careful-not-to-overdo-it/) and I never will, that is a promise. And you folks know how seriously I take promises.

These new programmers represent additional team members that were not in our original plans for the team. While we still have some open hiring requirements, these two programmers would be in addition to those folks. Now, while I think that trying to help us speed up the delivery of the game, with the same level of quality and features that we have already planned, is pretty sexy, some of you might disagree. And I do apologize if you wanted things like additional races, classes, etc., which are not in the immediate planning for Stretch Goals. However, this Stretch Goal is the right way to do things for our Backers, our studio, and the game. I hope that most, if not all, of our Backers will agree. Getting a great game more quickly than expected would be a win-win for all of us.

Thirdly, we announced the winner of the third trio reveal, the Heavy Fighters of Camelot Unchained. While the trio name is not as unique as “The Devout”, based on the reactions we saw during the livestream, you folks seemed pretty excited about the class. This is one of my favorite class reveals in terms of merging existing lore with our vision for the game. The Arthurians’ Black Knights are a near-perfect example of taking a little-known story about Camelot/Arthur and turning it into something unique for our game. The Tuatha Dé Danann’s Fianna are, of course, based on the Fianna or warrior bands of Irish mythology, led by one of the greatest heroes, Fionn mac Cumhaill. And like many great bits of mythology, these folks are based on real-life bands of young men: unlike the Black Knights, the Fianna were absolutely real. Even the motto of that class is drawn from the actual stories about the Fianna. For more information about the Fianna, go here (https://en.wikipedia.org/wiki/Fianna) or on Fionn mac Cumhaill, here (https://en.wikipedia.org/wiki/Fionn_mac_Cumhaill). In terms of the Vikings, well, it’s hard to top a class that is based on a magic hammer, the god Thor, and whose motto is simply SMASH! For those that haven’t seen it yet, here’s what the reveal for the Heavy Fighters looks like. 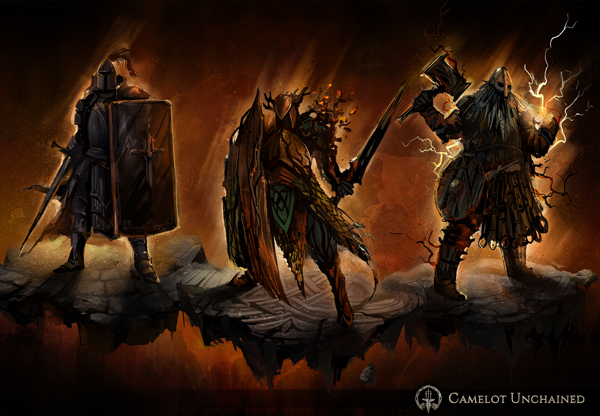 Besides all that great lore, motto, and our unique themes, these Heavy Fighters are another non-mirrored class trio, where all three Realms can claim that their Heavy Fighters are unique and different from the other classes. Whether it is the regenerative ability and debuffs of the Fianna, the range and storm abilities of the Mjolnir, or the Black Knight’s heavier armor and focus on damage dealing, the debate about which class is better will be raging, I expect, for the lifetime of this game. And that, dear Backers, is what the Foundational Principle of non-mirrored classes is all about. You didn’t donate to this game to get a bunch of class trios that are bland, boring, and mirrored. You donated to a team that wants to make interesting classes that are different from each other, and that’s what you are getting. And so much more is coming…

Fourthly, on the code side, the code base continues to move along nicely. Some annoying bugs squashed, new code added, buildings added back into the builds, and so much more. Next week’s User Stories update will be a good one for us. For those that weren’t able to watch Andrew’s livestreaming yesterday, he showed off some pretty cool tech (in its embryonic stage) of how we are going to make terrain change as the various Realms take it over. You can find the first part of his video here (https://www.youtube.com/watch?v=3GI9yKhHlUw) and the second part here (https://www.youtube.com/watch?v=E9v1pf1jaDI). And like everything else CSE, you’re seeing everything, warts and all. It’s a pretty cool stream, especially for those among our Backers who are tech-savvy, or who are interested in how we are going to pull off our whole “terrain changes with ownership” goal. And, of course, it’s not just planting a flag, or anything simple like that. No, we have to do more than that, and with our procedurally generated terrain system, it is relatively easy for us to implement, and far more visually compelling.

Breaking news Part 1: Andrew just fixed the bug that popped up during his livestream. As such, it has been added to the Hatchery build, so this weekend, our folks with Hatchery access can see this bit of Andrew magic. Our players will be able to capture control points, and thanks to the influence of their Realm’s magic, the terrain around the control point will change and spread until they reach the influence of another opposing point. Cool, cool, cool! Here’s a link to a Vine post that shows it in action here (https://vine.co/v/e9BHui6uBAq).

As part of our commitment to finding and fixing bugs now, rather than later, we’ve been running an Alpha, Beta, and IT test for the last seventy-two hours. So far, no crashes (which is good), but we want to keep the test going over the entire weekend. So, while there is no official FNF, the servers will be open the entire weekend to our Alpha, Beta 1, and IT folks, to see if we can get the thing to crash. If not, it will be almost an entire week since the game last crashed. Seventy-two hours so far, no crashes, not too shabby.

Speaking of flags, here are some concepts from Michelle. Ever-changing terrain is one thing, but we also need to communicate unowned, contested, etc. territory, though other means as well. We will do that, at a minimum, through the use of flags. As you can see from the concept art, the flags are more than just simple flags. Take a look at the top of each flag post and you’ll see what I mean.

Here are some Arthurian flags.

Here are some TDD flags.

Here are some Viking flags.

Here are some neutral flags. 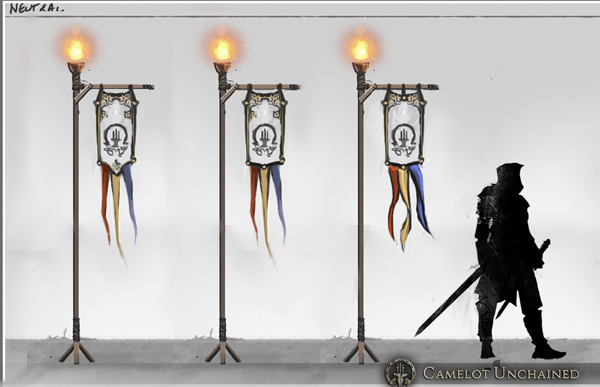 As you can see from the torches and particle effects in the images, this flag posts can be used to convey a variety of information, including the owner, state of ownership (contested, strong, weak) as well as the different Realms that are competing for control of the plot.

For some more concept art, it’s time to go back to Sandra for some additional helmets. 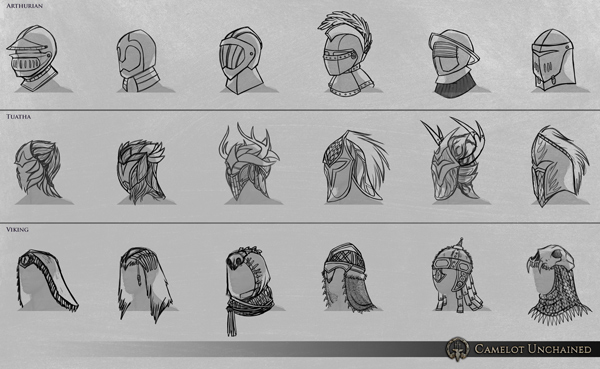 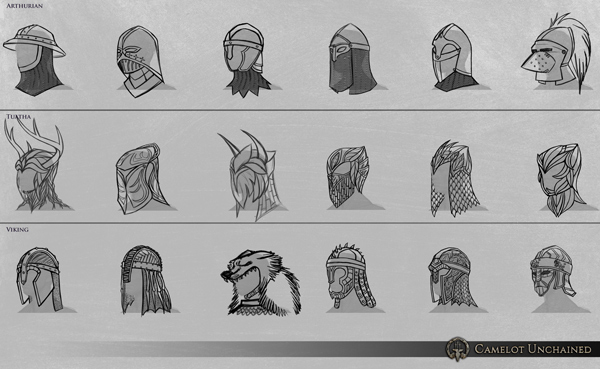 But wait, there’s more, of course. From Jon, we have some images of the male and female Frost Giants. 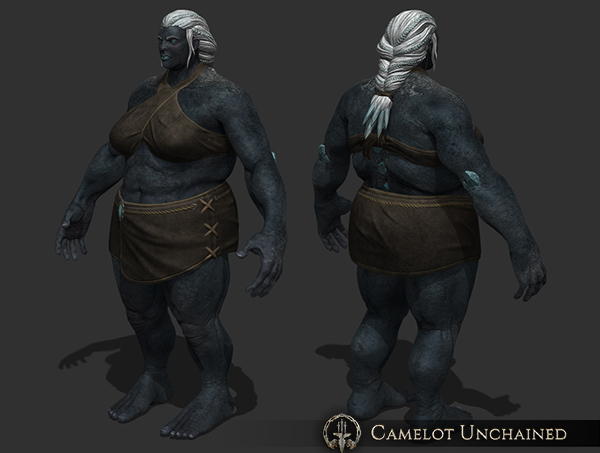 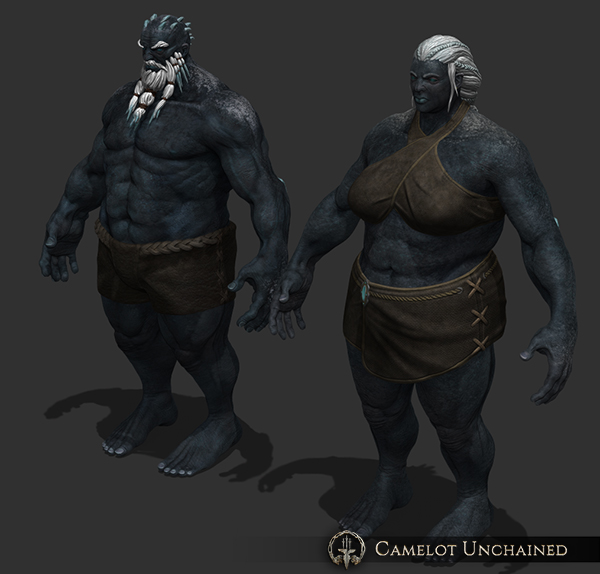 As you can see from the comparison, nobody would dare call this female Frost Giant, the “little woman” right?

And of course, here’s a couple more unretouched screenshots from our build. The first is a walk through the woods. 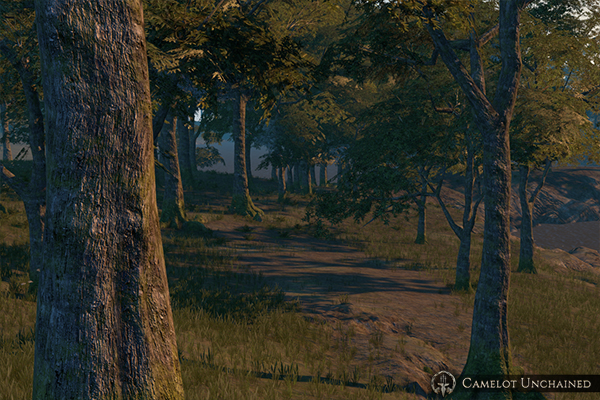 Ever wanted a house by a lake? Claim this plot of land, and with the help of a builder, it will be yours. Well, for as long as you can keep it away from your Realm’s enemies!

Breaking news Part Deux: Last-minute (as in, during the livestream) bug fix has resulted in the reappearance of a large number of bushes in the game while maintaining a high FPS. A bounty of beautiful, burgeoning bushes burst into bucolic screenshots. 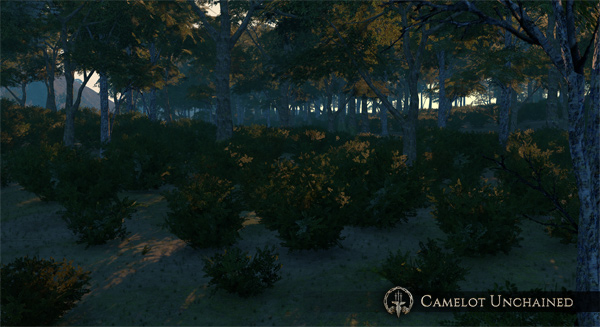 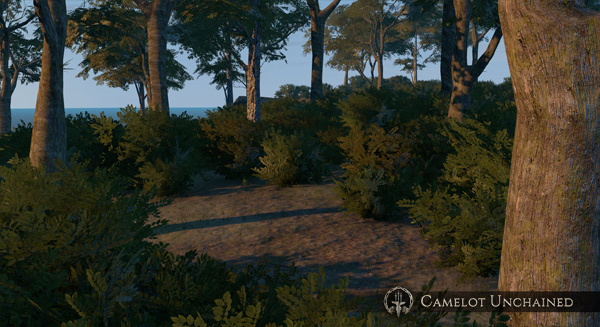 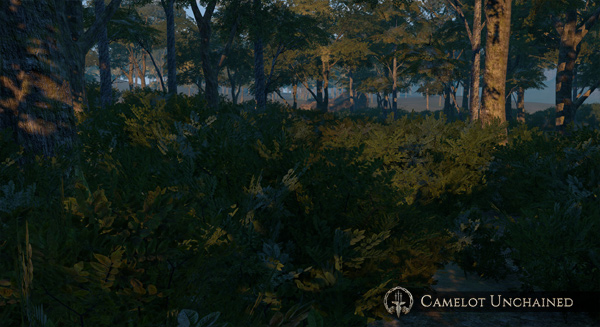 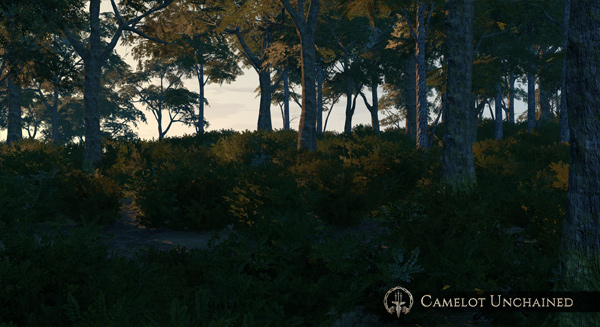 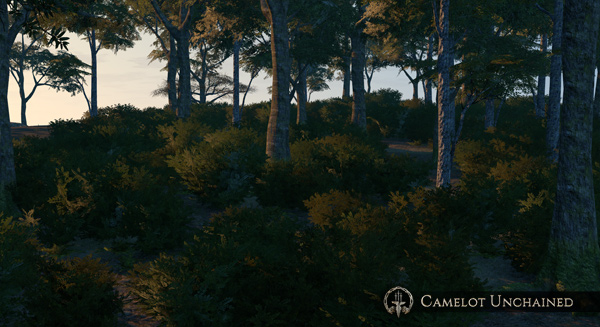 Way to go, guys! Nice way for us to end this update and this day.