Another week down, and lots more progress being made on our march to Beta 1. It’s time to share some really good news with you all. As you know, we’ve been happily tracking down bugs in the current build of the game. Happily? Why did I say happily, you might wonder? Well, here’s the reason I’m happy about it: We have been doing engineering on some really important systems for the game. As a result, some new bugs have appeared, which we now believe we have solved. Now, finding bugs is its own reward (especially if they are tasty), but along with the bugs, we also have something really important to share with you, and that is the performance of our game’s client. George, one of the senior programmers your Stretch Goals funded, has done a great job, as usual, with this part of our codebase. And I’m thrilled to be able to share the results of that work with you.

For those who have been in the recent Alpha/Beta 1 tests, you have seen the performance of the game decrease over the last month as we added new features, lots of buildings, destruction, etc. Now, this was expected, but as a consequence of all that, our FPS rate dropped to the point that some really old PCs/cards were saying “No mas”. At the same time this was going on, we were also working on a key bit of code for our client and adding it to the build. I’m really thrilled to say that this key bit is now in and working fine. And by working fine, I mean that it is kicking butt! Thanks to the new code, performance across all PCs has increased dramatically.

As an example of what I mean by dramatically, let me tell you about one of our Backers who has an 8-year-old PC, and an almost six-year-old graphics card. This Backer has gone from “this version crashes a lot, very low/unplayable frame rate” to almost 30 FPS and no crashes. Again, this is on a very old PC/graphics card! From what we have seen in the office, performance on all graphic cards/CPUs has improved, even on the high-end cards. As you can imagine, this is a big deal for us, and we are nowhere near done with improving the game’s performance. So, if you haven’t seen the latest version of the game and/or you were getting discouraged by the performance of the latest builds, this should be good news for you! And as always, we have just begun to optimize the game’s performance; we still have a long way to go.

One of the other things we’ve been working on is called the Updater. In short, this fancy bit of legerdemain by Marc allows us to write more robust code, faster. The updater is the core part of our server.  Its responsible for every single action that happens on the server, from a person getting healed, to a spell being cast, to picking up an item in the world.  We implemented a new design that shrinks the updater code by roughly 50%, and at the same time, makes it impossible to make our most common type of errors.  Now, this is a pretty big deal, and since it touches everything, well, we had to do a lot of work on it before it landed. And even with that, well, we had to keep our fingers crossed when we made it LIVE (without warning to our Backers). The great news is that it has worked as expected, and because of the way it has performed so far, the programmer who created it has already moved on to other tasks (like getting crafting mats into the game).

In other news, we have also upgraded our database to the latest version of MongoDB’s storage solution: Wired Tiger. Now, that is indeed a cool name, but its impact on our game’s ability to handle lots and lots of database queries/writes/etc. quickly was a necessary step in getting our game ready for Beta 1. So far, all is good there!

We’ve also been working on tons of other things, including plot ownership, the patcher, the terrain editor, programmer interviews, ability importing (from our spreadsheets to the game), and new art, including armor, weapons, and so much more. As Andrew told you in the stream, he’s been working on improving our camera system and our archery system.

For this weekend’s test, we’ll have two different tests running this weekend. On Hatchery, we will be running an Alpha & IT test. This version will have the latest and greatest codebase, including Andrew’s camera changes. On Wyrmling, which we hope will be running all weekend, we have the almost-latest version, without the camera changes, and item dropping and picking up has been disabled. Hopefully, we’ll re-enable that next week.

Building and destruction will be turned on. Buildings will not be persistent, so note that if we need to reboot, any buildings you made will be destroyed. Also, blocks on Wyrmling will be just like Hatchery, which means that they are color-coded by health/hit points. So, if you jump into Wyrmling and wonder why everything has gotten so colorful, it’s on purpose. This will change, of course, but for now, it’s helpful for you folks and us so you can determine the state of the block when/after you strike it. Also, please note that the ease of destructibility you have now will change throughout Beta. This is the “Make things break really, really fast” version (ALL blocks simply have 100 health), which would be silly in a LIVE version of our game. In the meantime, enjoy breaking and building stuff.  Also, when you capture a point, you’ll see the terrain “pop” but will look the same as it did before. As per today’s Wrap Up, we’ll add the new terrain next week!

For today’s art, first up is another look at some armor. This is a low-poly version of some Viking medium armor (untextured, of course).

Next up are some additional promotional art pieces of some of our races wearing actual clothes and a piece of concept art. 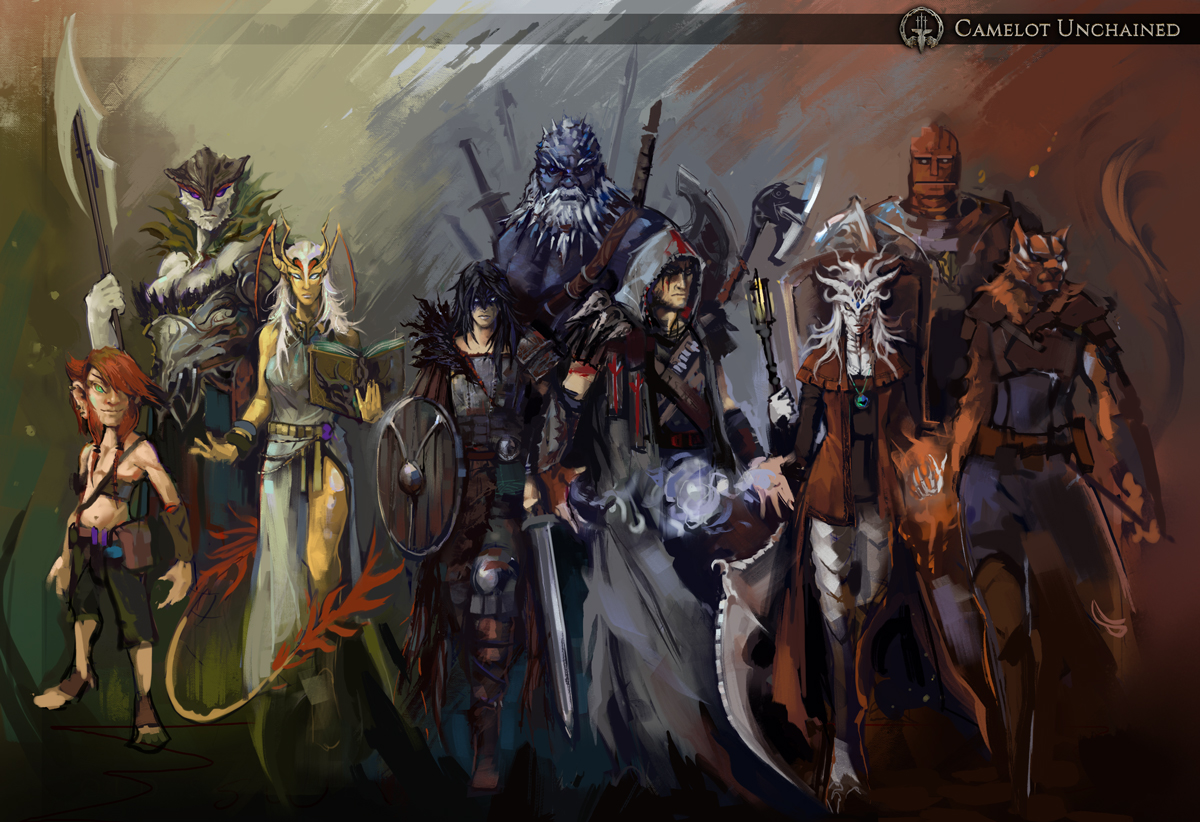 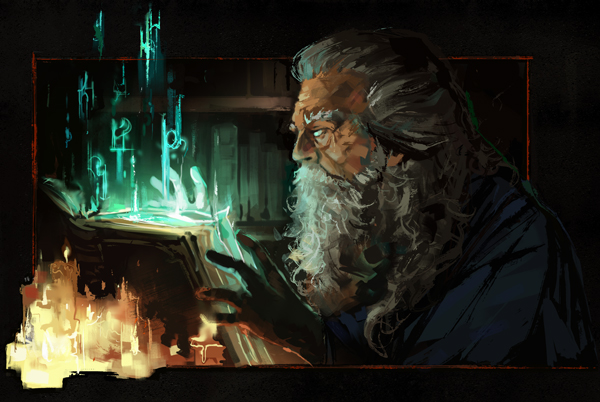 Here’s a quick concept of what one of our Places of Power will look like.

Here’s a screenshot of a bit of our landscape with something new in the foreground. It may be hard to see it, but if you squint really hard and take a sharp turn to the left with your eyes, you might be able to make it out. 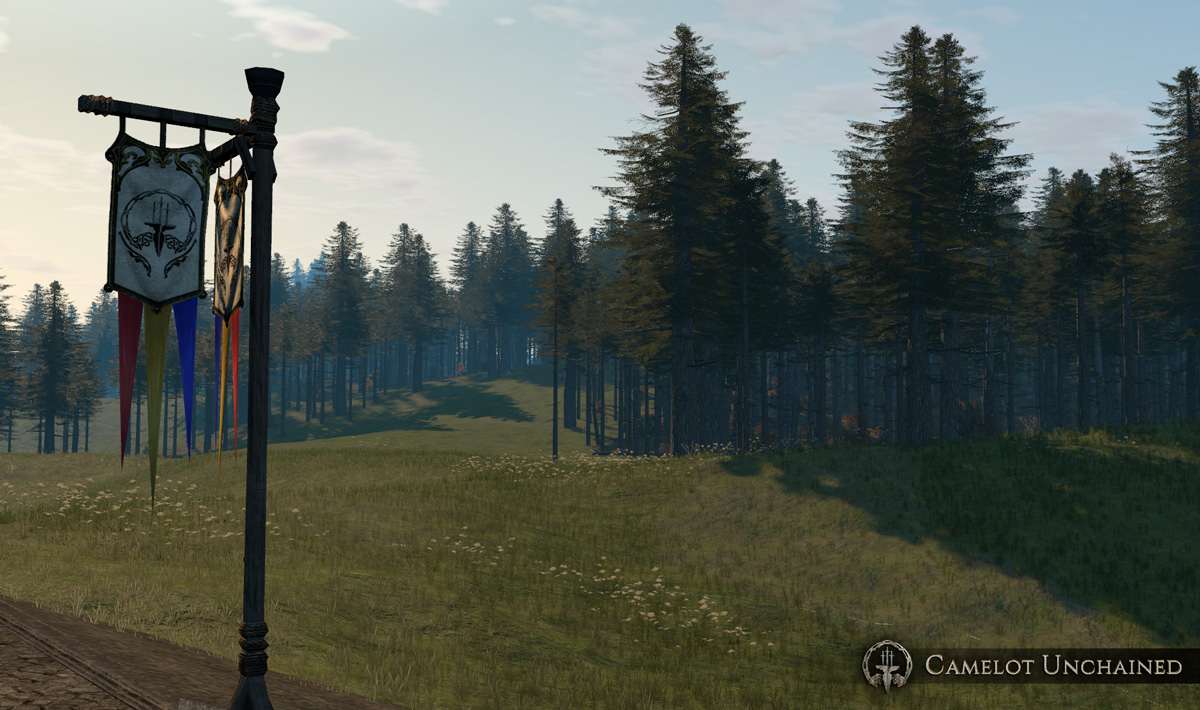 That’s it for now. I hope you enjoyed sharing this week of crunch with us. We certainly did enjoy sharing it with you! For next week, we will add some additional livestreaming to the schedule. The tentative schedule can be found here (https://docs.google.com/spreadsheets/d/12yIkjnQOaJ3mzLldaV1cNqfTC8WWSA0c7vbIj3PlDWE/edit?usp=sharing).

As per today’s Wrap Up, we send our sympathies to all those who were affected by the layoffs at Carbine, and to those who were affected by the cancelation of Everquest Next. If it wasn’t for Everquest’s success, I would not have been able to get the funding for Dark Age of Camelot, so on a personal level, I’m sad about that news. Also, condolences on the passing of Keith Emerson of Emerson, Lake and Palmer.