Another month in our march toward Beta, and we’ve got another update full of even more goodness than usual. Things have been going great here, and as you will see from our update, the engine continues its transition into a game. Our new animation system continues to be refined, bugs squashed, and, for the first time in a long time, new animations are being added to the game. But before we get to that in the user stories, let’s talk about the current state of our testing.

Over the last few weeks, we’ve made a major change to how our game handles threading. For those who are wondering whether this is part of the crafting system, no, it isn’t.

More information can be found here (https://en.wikipedia.org/wiki/Threaded_code). It’s a really cool system, but, as one might expect, it comes with the usual issues. It’s something that we really needed to do sooner than this, but frankly, we didn’t have the time. OTOH, it will pay dividends going forward. Tonight, as we were preparing an FNF build, Wyrmling decided to say “No mas” three times in a row. Well, we kicked it around a little bit (like they show in the movies; kick the high-tech instruments, and it’s all good!) and it’s now back up and running. For now, we have opened up the server (Wyrmling) to our Alpha, Beta 1, and IT folks, with the following caveats:

1. Don’t be surprised to see a crash or two this weekend. Yeah, that’s not normally how we roll, but it’s important to see if we can get more data on the crash that just occurred.
2. This new version isn’t quite as performant (mainly on the FPS side), as the old system. OTOH, as you will see from the User Stories that we have posted since the last FNF, we’ve made a lot of changes to the game. We’ve got some FPS-geared improvements going in next week, but we couldn’t get them in the game in time for tonight.

So, enjoy this FNF, and please, please remember the two caveats above.

Now, let’s get to the User Stories. Enjoy your patch notes data mining, and I think you’ll find more than a few interesting nuggets in there.

As a Backer, I’d like to play in a procedurally-created environment. – Part Four.
Big code restructure to allow for environment maps for bounce lighting. – Complete

As a Backer, I’d like to see the world begin to be propped out with generic fantasy items. – Set #3.
Small hay piles for ground clutter. – Complete

As a Backer, I’d like to see the world begin to be propped out with generic fantasy items. – Set #6.
Generic leafy bushes. – More leaves than their scraggly brethren. – Complete
Generic lush bushes. – Even more leaves! – Complete

As a Developer, I’d like to increase physics performance, as well as make changes easier to integrate.
Improve client-side interpolation and prediction when people collide with objects. – Complete

As a Backer, I’d like to know about smaller changes that don’t have their own user story.
Improve equipment-change commands on server to reduce errors. – Complete
Pull together PerfHTML into client-driven panes, not several different independent paths. – Complete

As a Backer, I’d like to experience positional-based audio and music within the world of Camelot Unchained.
Arthurian voices phrases and sustains. – Complete

As a Developer and Backer, I’d like to see improvements in lighting and rendering.
Refactor mesh renderables to reduce render cost of non-player objects such as trees. – Complete
Realign world to remove z-fighting and precision artifacts. (Fixes obvious geo flickering on player characters.). – Complete

As a Developer, I’d like to see improvements in the editor to facilitate my work.
Editor will refuse imports of incorrect file types. – Complete

As a Backer in Beta 1, I’d like to have a sampling of Arthurian light, medium, and heavy armor to wear in game.
Update work sheets to reflect silhouette and low poly improvements. – Complete

As a Backer in Beta 1, I’d like to be able to choose from a list of classes to play.
First Pass Class abilities listed based on dependencies. – Complete

As a Developer in Beta 1, I’d like to see improvements in the ability system’s stability and robustness, as well as make it easier for developers to work with.
Create new generator for updaters, which provide the new API and the old API. – Complete

As a Backer in Beta 1, I’d like to be able to pick an item up off the ground, put it in my inventory, and if applicable, equip it.
Weapons:
Expose/write function to combine component stats into existing ability. – Complete
Add weapon types and let that be a field set by the primary component. – Complete
When CraftedAbility is triggered, see if we need to combine a weapon into the ability before executing. – Complete

And for the first of today’s art reveals, here’s something completely different. Can you guess what it is? 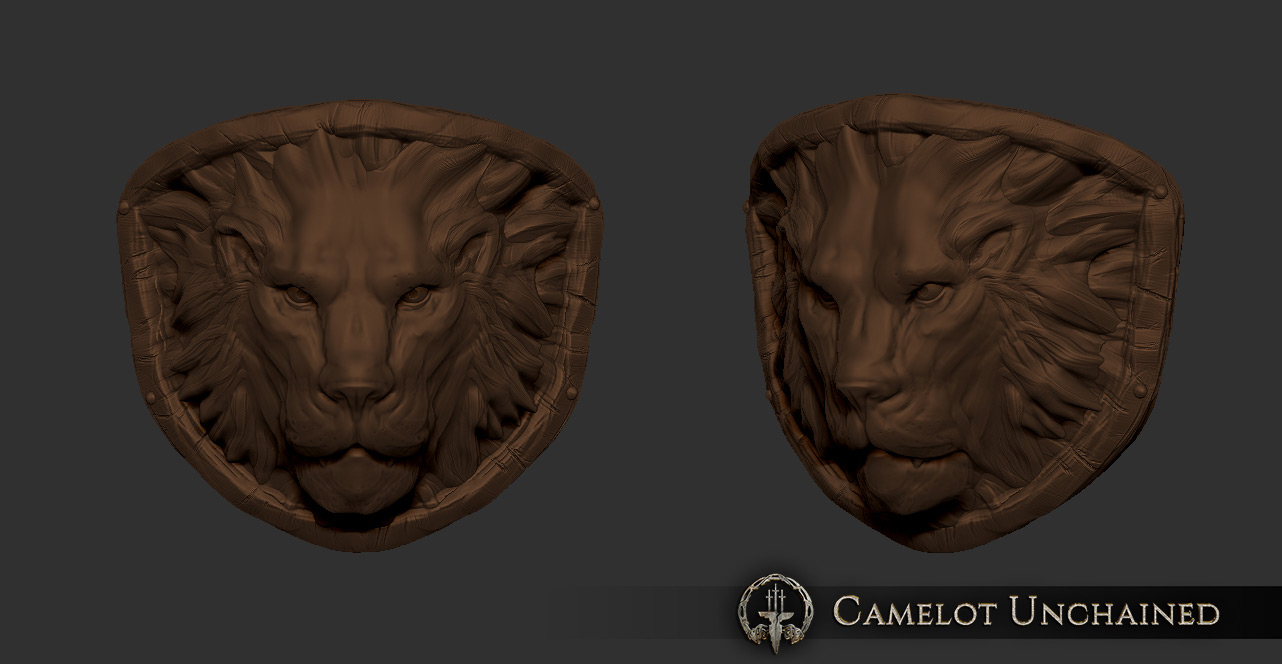 Okay, it’s not something from any of my favorite lion-themed movies or cartoons. It’s actually a shot of a set of knee pads.

For a much more conventional piece, here’s what the well-dressed, Arthurian heavy tanks will be wearing this spring. 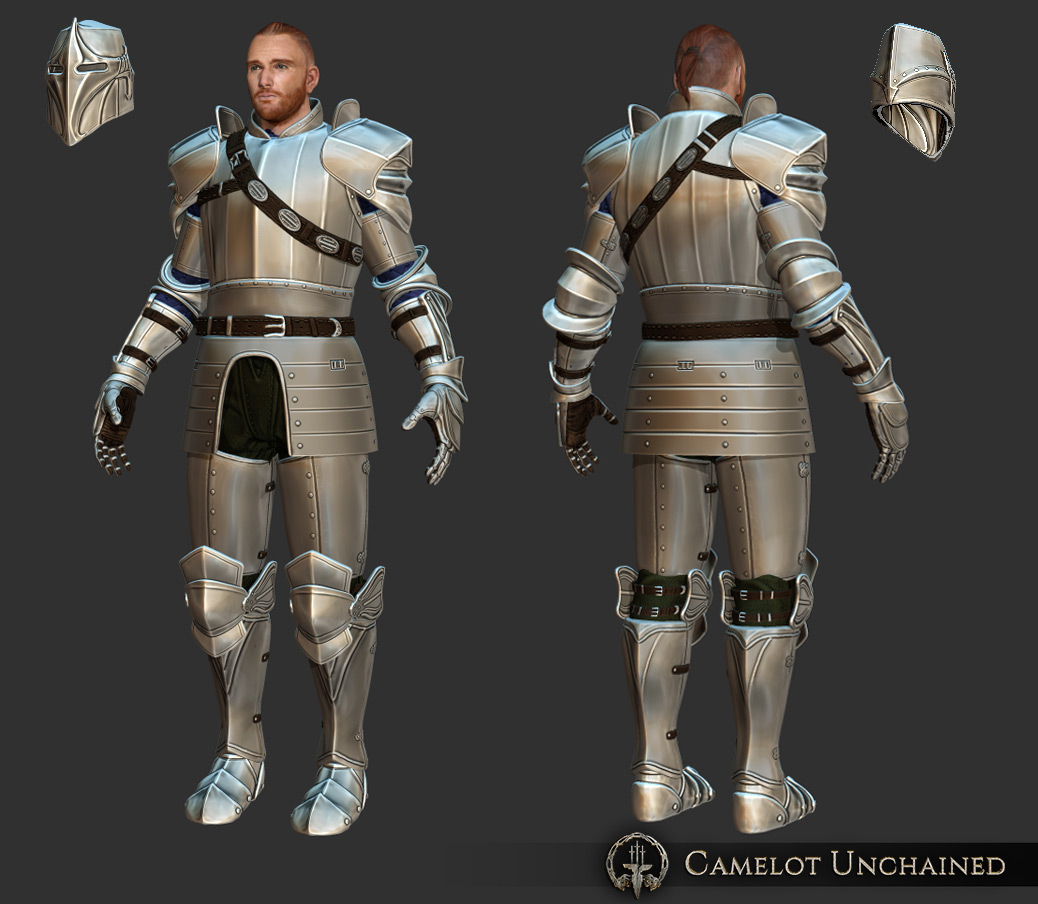 Speaking of spring, here’s some concept art for how pine forests may look for each of our three Realms, and the usual research pieces that went into the concept pieces. 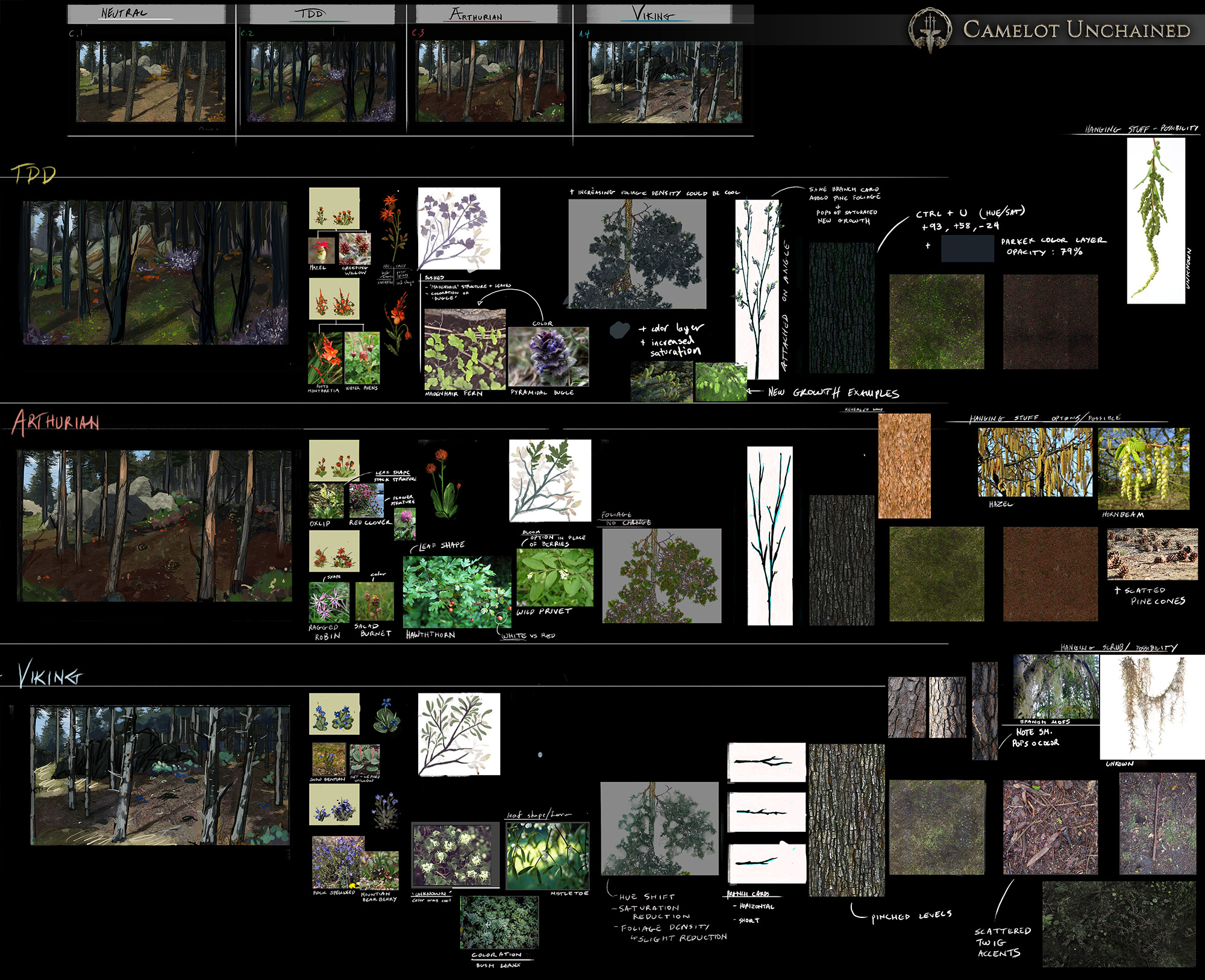 Well, that’s all the art reveals for now. BTW, as we are now 75% to our next Stretch Goal, just wanted you folks to know that we are still looking for more programmers, and have engaged the same recruiter we did last time (who connected us with the wonderful George and Marc). We’re keeping our fingers, toes, and tails crossed that we can get some additional talent into the studio before too long.

Again, as per above, enjoy the FNF, and keep your fingers crossed!

As always, we thank you for your support!