Fantastic Friday, all! It’s been a really, really great week here in CSE Land, and it’s now 9:30PM here, so let’s get to it.

First, as you know, City State Entertainment is now officially in “crunch mode”. The TL;DR version is that from now until we deliver Beta 1, the studio will be working the equivalent of 12 hours a day, 5 days a week. We are doing this because we believe that we owe you, our Backers, our best efforts to deliver Beta 1 on our current schedule. We don’t have to do this, and I/we really appreciate all the sentiments from our Backers who are urging us not to burn ourselves out (which we will not do), but we truly want to deliver Beta 1 sooner, rather than later. FYI, as per my last update, we will not be going into crunch at launch to push Camelot Unchained out the door; this is our last crunch for this game/team.

So, expect lots of impromptu tests for Alpha, Beta 1, and IT folks, as we push ourselves to open the gates to Beta 1. For more information on all this, you can head to the Forums and/or watch the livestream that I did regarding Beta 1, here (https://www.youtube.com/watch?v=6Fj_17ShduE).

Secondly, we got a lot done this week. We’ve updated our Beta 1 checklist by adding 11 items, and we have now checked off four items. These four are:

1) “First Final” pass at player item structure
2) Items exist in the real world: Can be dropped, traded, picked up by a player, and persist in the world
3) Refactor of Animation System with upper and lower body animations
4) Automate bot testing into a single command, and enable them to restart themselves

Lots of progress was also made on other items, so all in all, it was a great week here. While we still have a lot to do (of course), as we showed on today’s livestream with Rob (which you can see here: http://www.twitch.tv/citystategames/v/50960818), we are pretty close to knocking off another major item in the list, which is building destructibility. Andrew also uploaded another Vine today, this time focusing on playing with the gloss/roughness of images with the new lighting system. As you can see here (https://vine.co/v/i6paxqtJzKb), we can make things really shiny or not, as our needs require.

Thirdly, we have recovered from MAGFest, and are looking forward to our next convention, whenever that is. We’re thrilled with the response we received while we were there, but we are even more pleased with the response we have gotten in terms of new Backers knocking down our current Stretch Goal. We are only around 10K from unlocking the next one! All I will say about the next Stretch Goal is that I expect a certain segment of our Backers will be very happy with it, and that it’s not an Extender Pack!

Fourth, we have some great art/screenshots to share with you all. By the way, you can watch Michelle’s art livestream from earlier today here: http://www.twitch.tv/citystategames/v/50934281.

First up, here’s a quick cartoon Sandra did for the opening of crunch. You’ll see a lot more of them when we send out the newsletter. 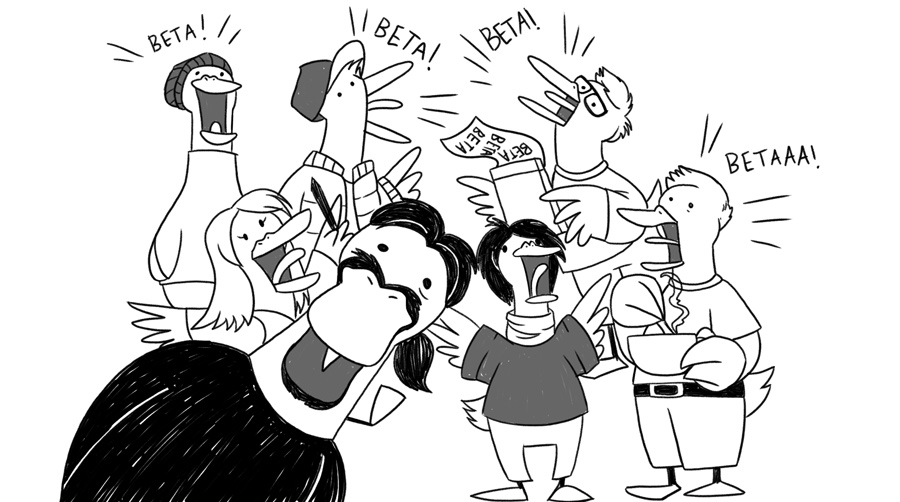 Next up, here’s a dragon that Jon was working on at MAGFest.

How about some Arthurian WIP medium armor? 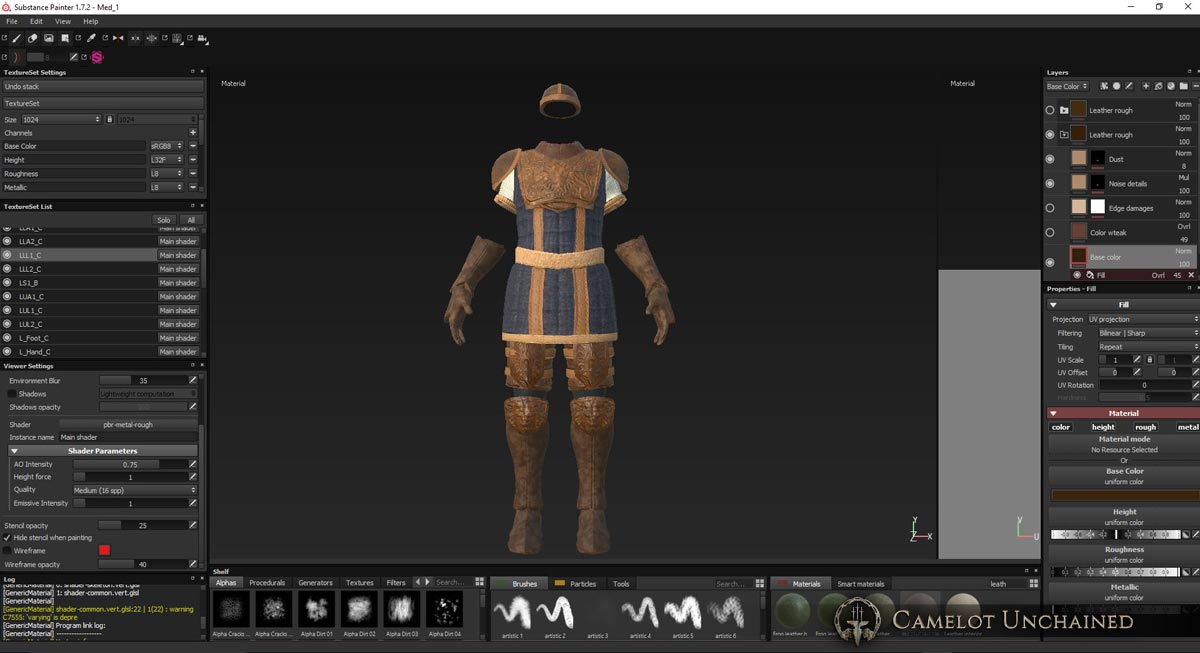 Here’s some other Arthurian armor. 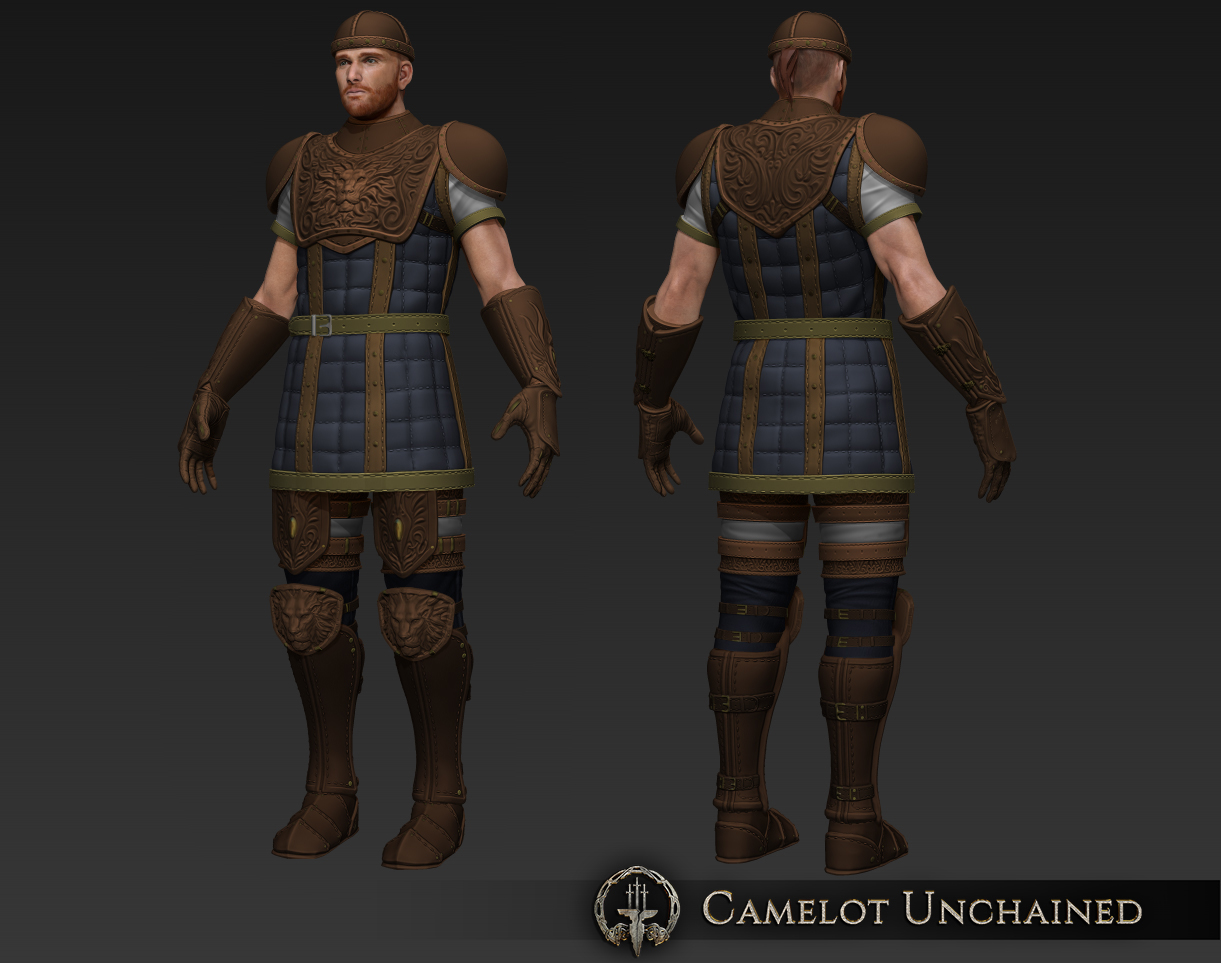 Not to be outdone, here’s some medium armor of the Tuatha Dé Danann.

Here’s a link to a time-lapsed video playing at 2x speed, as Jon uses ZBrush to sculpt a lion’s face into an armored knee guard here: https://youtu.be/_yNn720pCkE.

And let’s end today’s art-a-palooza with a great screenshot from the current build of the engine (still using the old lighting model). I think it is safe to say that our engine has come along a wee bit since the P.A.T. days, no? 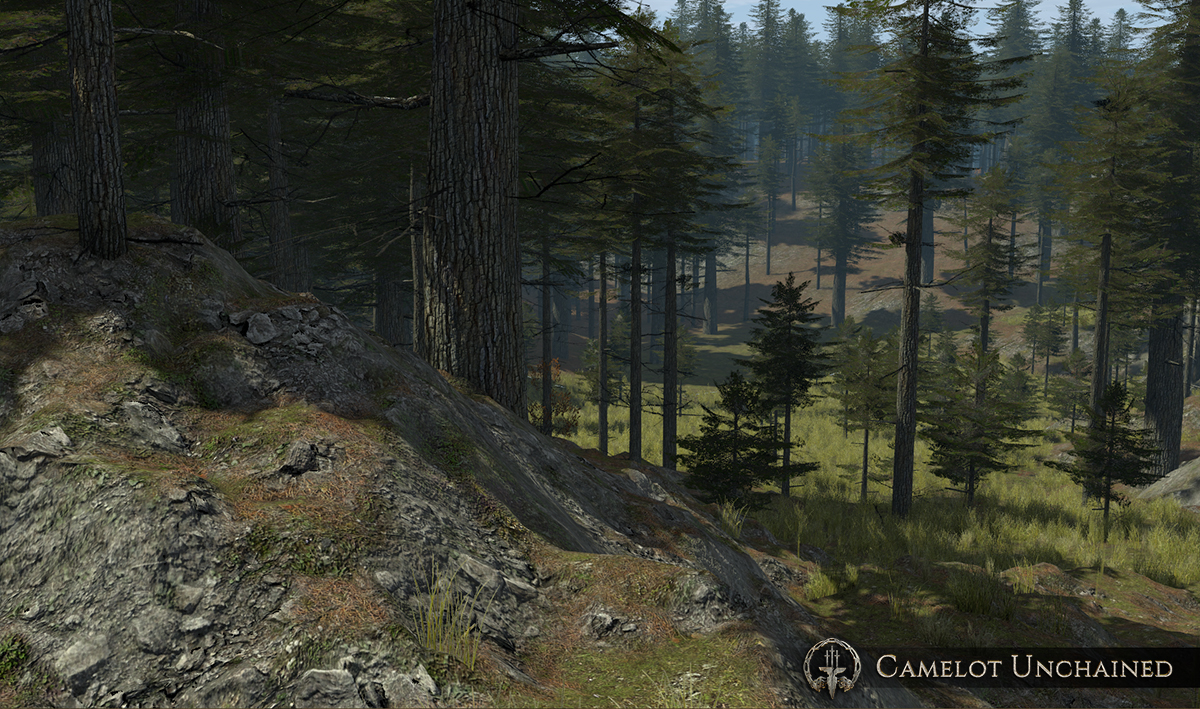 And just think how much better that will look once the new lighting system goes in and the artists get another pass on the textures.

Fifth, Hatchery is now open for business for our Alpha and IT testers. It will remain open all weekend, unless something really bad happens. On Hatchery, you can build and destroy buildings (building destruction is massively OP so we can really test it out). If you play a Human or a Luchorpán (please roll a new character, don’t use existing characters), you can try out the new item system. So, have fun building, destroying, and playing 52-pickup (dropped items look like barrels and can only stack twice) with the current items in the game. Current commands to do so are:

FYI, if you pick up an item, and you are not a Human or Luchorpán, you will be able to put on the equipment, but it will NOT be visually represented right now. This is a relatively untested build; however, because it has a lot of new code that needs testing and because we wanted to start testing as soon as possible, well, it might be a fun weekend for all sorts of reasons. Do not be surprised if something bad happens over the weekend! We certainly won’t be.

Again, PLEASE ROLL A NEW CHARACTER WHO IS HUMAN (ANY REALM) OR LUCHORPAN (TDD)!

Again (Part II) – BUILDING DESTRUCTION IS MASSIVELY OP, SILLY, AND SO MUCH FUN! WHAT WE ARE TESTING NOW IS NOT HOW IT WILL WORK IN THE LIVE GAME.

Finally, next week we will begin our first full week of crunch and livestreaming. The current plan is to have at least five hours of active livestreaming (as opposed to just turning the cameras on) every week, including contests, readings, and much more. Crunch mode may not be a ton of fun, but we are certainly trying to make it a lot more interesting for our Backers, and for ourselves as well!

That wraps it up for today’s update. As we end our first week in Beta 1 crunch, I want to take the time again to thank you, our Backers, for everything you do. As always, I appreciate your patience and ongoing support as we continue to deliver on our pledge to always work hard and treat you with respect. I also want to thank our team for their continued efforts in bringing Camelot Unchained™ to life, as well as my wife, Lady J, who is lending a hand by cooking some dinners for the team. This week the team devoured two types of lasagna, two types of chili, salad, corn bread, brownies, and chocolate banana bread made by Janet. That’s helped make things a bit homier during crunch, and also allowed us to keep the spending down. A win-win!

Again, and as always, we thank you for your support!

CU in the game!