Posted on September 3, 2015 by Rift Universe

First, our newest hire, character artist Jon Young, live streamed from the studio on Thursday. Judging by the reaction in the Twitch stream, you folks liked what you saw from him. I’m sure this won’t be the last time Jon streams, and I think you’ll enjoy watching his work help evolve the characters of Camelot Unchained™ over the next year, and beyond.

Our lead animator, Scott Trolan, is working on a video that details our approach to the new animation system for our game. As we’ve said in other updates, we are building our own animation system as part of our engine build. Now that we are coming down to the home stretch with the first working version of that new system, we can work on the real animations for our game, instead of the placeholder ones that we’ve shown so far. After all, it didn’t make sense to create the animations for the game until we had the system in place that delivers them to our players! I hope that you’ll like the video, and of course, the animation system, as we deploy it to the game build.

Third, we are making a lot of progress overall with the engine. We invited our Beta 1 players into the first Friday Night Fight, as well as a couple of other tests. Overall, things went very well, but we’re still tracking down a server bug since last week. The good news is that it hasn’t reappeared since last Friday; the bad news is that we think it’s still hiding somewhere in the code.

In other progress news from this week, we made major improvements to the engine’s ability to render very large buildings (1M+ blocks with great FPS!)  here’s (https://vine.co/CSE)  a Vine post we made earlier this week, as well as other visual improvements. Design is working on a major class presentation, which we hope to make before the end of the month. Looking forward to that!

In terms of actual completes of our User Stories, we were a little lighter than usual, due to the time we spent doing some code cleanup (better done now than later) and testing, some vacations + illness, and having our programing guru, Andrew, out at Siggraph doing his brilliant engineer thing. However, we still have lots of stuff to talk about. Overall, we hit 11 existing cards, with 28 completes, and added 4 new cards with 8 completes on them:

Completes and updates to existing Cards:

As a Backer, I’d like to have abilities associated with stances.
Stance editor to define applied active effects. – Complete
Abilitiy components define what stances they can be activated from. – Complete
Notification of ability fail due to bad prereqs. – Complete

As a Backer, I’d like to see the sun, moons, and stars in the sky with sky color changes based on time of day and position of those celestial bodies. – Second Pass
First pass moon concepts – Complete
Create first pass collided moons object. – Complete

As a Backer, I’d like a system that checks for certain requirements that can be used in other systems like the ability system.
Create editor to integrate checks in game. – Complete

As a Backer, I’d like to see the world begin to be propped out with generic fantasy items. – Set #3.
Old lamps updated as group with vfx and lights. – Complete
Small rocks for ground clutter. – Complete

As a Backer, I’d like to see the world begin to be propped out with generic fantasy items. – Set #5.
Standing and hanging braziers, single and double. – Complete
Brazier models include fire vfx and lights. – Complete
Arthurian chests x 3 – Complete
Large and small lumber piles. – Complete
Sacks, and group of sacks with food. – Complete

As a Backer, I’d like to see graphical and networking performance improvements when building and destroying structures.
Weld building vertices to reduce memory for rendering. – First Pass – Complete
Removed redundant block validation to improve performance when updating buildings on the server. – Complete

As a player, my character health is allocated to each body part which can take damage from different attacks and suffer wounds separately from blood.
Set up network code to communicate wound info to the client. – Complete
Create Wounds structure on the server. – Complete
Allow “overhealing” to remove the lesser wound. – Complete

As a Backer using an older graphics card, I’d like some love.
Split the Light Handler in two so we can handle DirectX 10 & 11 users individually. – DirectX 10 users no longer crash entering world. – Complete

So, not a bad User Story update, at all. We also did things like add new models and lights to the test area to make it feel more like a world, and still more are coming next week. While this area will go away once the new map is built, we are going to use this current map to test some new rendering code in the next few weeks. So, expect a lot more changes there, as well. Oh, yeah, BTW, if you are in today’s tests and it’s time for the moon to make an appearance, just look up!

On tap for next week we have my Stealth Q&A, the animation video from Scott, and a lot more Alpha/Beta 1 testing, including the next installment of Friday Night Fights!

FYI, today begins another 72 hours of Extended Alpha Testing for our Backers.  If this weekend goes well, we’ll have another Beta 1 test early next week to prepare for the next FNF! So far, the improved rendering code is, well, improved and with the image of the two moons moving around the world on my screen as I’m playing in the current build, I end this update.

P.S. Here’s a fun creation from the latest build. It definitely quacked us up! 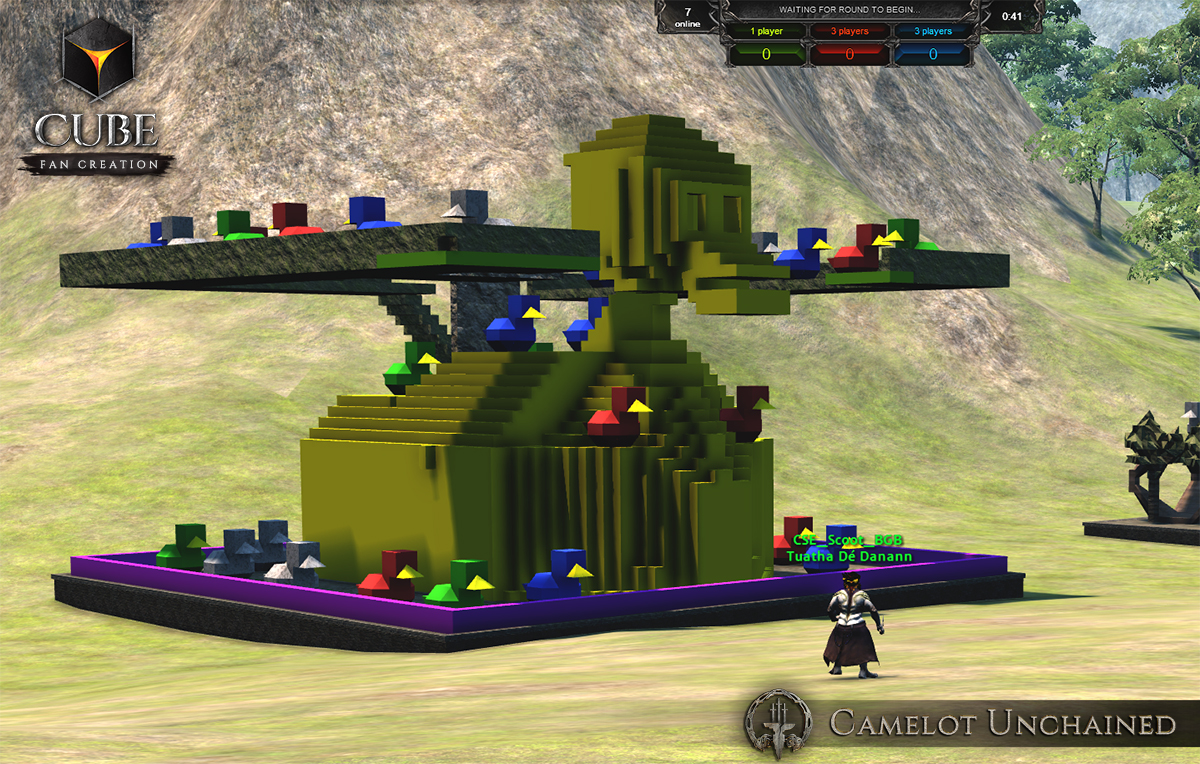