It finally feels like we really are in Autumn this week, as the weather dipped momentarily into “Wow! I guess I need a jacket!” range. But then, the end of the week went back to t-shirt weather, so who knows? Anyhow, welcome to our end of week update! If you missed today’s live stream with me (Tyler) and Tim, you can catch that HERE. This week’s update finds us detailing the last five weeks of work in our User Stories update. We continue making some great progress this week, in many areas, as shown below in a longer-than-average Top Tenish list!

A hefty haul of work this week, and that’s only the highlights! User Stories this month, like our Top Tenish, are chock full of lots and lots of items. 178 to be exact! If you want to find something specific, you can always head over to our User Stories page which is searchable. If you’re not interested in all the details, scroll down until you start seeing some of the art from this week.

As a Backer, I’d like to know about smaller changes that don’t have their own user story.
Add GraphQL to DevUI. – Complete
Give DevUI access to API requests and use indexes instead of titles for mapping tabs to content. – Complete
Set up protobuf message and plumbing to send a ‘show dev UI’ message from server to client. – Complete
Create infrastructure for dev UI for hot-reloading C# classes the same way we do XML files. – Complete
Show list of dev UIs in a perfhud tab in the client. – Complete
Create PostOffice system for managing message sending and receiving. – Complete

As a Backer, I want to be able to own a plot of land and build within it.
When claiming a plot, claim for faction and player. – Complete
Prevent player from owning more than one plot.  – Complete
Add DevUI to expose plot management slash commands. – Complete
Add admin page for building plot DevUI. – Complete
Building plots can be initialized to a master blueprint. – Complete

As a Backer, I’d like characters to have vocalized combat, damage, and death reactions.
Upload vocal assets for testing and sort by flinch, exertion, grunts, etc. – Complete

As a Developer and Backer, I’d like to see improvements in lighting and rendering.
Factor in the light radius to the bounds of our system to prevent randomly turning on/off when particles are larger than the system they are a part of. – Complete
MeshCombiner improvement – don’t queue the same buffer multiple times for multiple accumulation passes in shadows. – Complete
Fix flicker when building higher LOD character through Character Manager. – Complete
Don’t change a model’s pooled meshes outside the render context lock in the Character Manager. – Complete

As a Backer I’d like a patcher to not only update my game, but also give me the most important news and updates, get support, chat with the community and look awesome while doing it!
Update PatchNote ID query argument to be a string instead of an int. – Complete

As a Backer in Beta 1, I’d like to play as a Crafter with basic gathering and crafting mechanics for testing.
Improve performance when sending large numbers of Vox ingredients through GraphQL crafting queries. – Complete
Alloys
Add slash command to list all alloys in game. – Complete
Add CSV test to ensure alloy loadouts are not specified on non-alloy items. – Complete

As a Backer in Beta 1, I’d like to have a selection of character emotes to use.
Create skill part that plays an emote with the specified tag. – Complete
Hook pre-built emote skill to play on slash command. – Complete
Add the concept of ‘implicit’ skill defs for emotes, so that they don’t need to be in the skills known list, or on the ability bar, or in the crafted skills database. – Complete
Add Hide Model Effect to hide your weapon on an emote and properly push the tag. – Complete
Create Emote AnimSet tag so we can play animations specifically from that set and don’t need all other sets to include emotes. – Complete

As a player, I want to view a character UI that shows me my stats, allows me to swap out my equipment, organize my inventory, and see my collection of crafting resources.
Implement failsafe to prevent inventory hang if API server goes down.  – Complete
Make sure an item can leave your inventory when it is the only one left in the collection.  – Complete
Match client equip flow with moveItem requests. – Complete
Add more character related data to GraphQL queries for use on the character details page. – Complete
Addtional inventory UI SFX. – Complete

As a Developer, I’d like the Camelot Unchained ability system to fully support the design scope of the game for B1.
Revamp starting skills defined in xml by simplifying SkillDef. – Complete
Add starting skills during player login if they don’t have any skills. – Complete
Assign unique IDs to skilldefs. – Complete
When sending SkillsKnownComponent to another server, also send the blocked and allowed categories. – Complete
Fix subject group logic to have two groups; targets and recievers (and make it so that not all event components have subjectGroupLookup as a field). – Complete
Support target track that checks friend first and falls back to enemies. – Complete
Change OwnerHistoryComponent to store an EntityID instead of an IEntity. – Complete
Projectile Entities remember the skill that spawned them on the server, and send it down to the client. – Complete
Update skill XML so ClientProjectileEffects correctly target Self. – Complete
Creation of clientside Effects now gets an ActiveSkill for use by the Effect. – Complete
Send projectile physics predictions to everyone instead of just the person using the skill, so they can inform client predictions. – Complete
Add an IgnoreInitialContacts physics flag that can be used for projectiles to escape from their source’s geometry. – Complete
Add AttachProjectileEffect that will attach the Renderable from a predicted projectile (on an ActiveSkill) to an Entity as part of its animation. – Complete
Store ActiveSkill in constants collection. – Complete
Fall back on the skill entity’s model rather than trying to get a parent that doesn’t exist. – Complete
ActiveEffectsController supports ActiveEffects that do not have time durations.  – Complete
Add options for projectile effects and active effects to skill detail command. – Complete
Hide weapons anim event for equip/unequip weapons. – Complete
When firing local projectiles, use the gravityFactor from ClientProjectileDef. – Complete

As a Backer in Beta 1, I’d like to be able to hold a torch during travel stance and use it as a weapon when in combat stance.
Set torch as a weapon that can be used in travel stance, with animation setup complete. – Complete
Create left arm combat idle flinch. – Complete

As a Developer, I’d like to find a simpler solution to equipping and unequipping my weapons from different stances that reduces animation overhead.
First pass test: Equip and Unequip of two-handed weapons using shared animations. – Complete

As a Backer, I want to seamlessly move between islands and zones without being aware that I’m moving between different game servers.
Physics Subzones:
Avoid deleting PhysX actors when removing ActorProxy from a physics subzone.  – Complete

As a Backer in Beta 1, I’d like the updated encumbrance system to use an item’s weight and compare that to the stat-driven carrying capacity of my character.
Upon creation of Inventory Component, check for encumbrance (so a player can’t log off/on to lose debuff).   – Complete
Tie re-application time more directly to length of debuff in skill node if possible. – Complete
Add a flag to the Inventory Component to see if they are already encumbered so we don’t apply multiple debuffs if your inventory changes multiple times. Or remove an existing debuff before applying the new one. – Complete
Remove encumbered debuff when a player’s weight goes below max.  – Complete

As a Backer in Beta 1, I’d like the set of animations the player uses to be controlled by the player’s stance, equipment, and other such gameplay factors.
Add sound effects to stance changes. – Complete

As a Backer, I want an animation system that blends multiple animations together, and allows for immersive and fun combat.
Google Sheet integration:
Improved error handling on Build Server when loading sheets fail. – Complete
New Animation System
AnimWalker client side commands for toggling a state on how the ClipTime is updated. – Complete
Add a PerfHUD panel for debugging animations. – Complete

As a Backer in Beta 1, I’d like to be able to explore a mine using the portaling and zone transition tech, in lieu of the post B1 “bubble” tech.
New parts added to support design needs. – Complete
Import all parts with updated naming convention from Design. – Complete

As a Backer in Beta 1, I’d like an interactive portal system that teleports me to other active portals based on availability and Realm control.
First pass VFX: Viking Portal. – Complete
Arthurian portals – update and improve materials. – Complete

As a Developer and Backer during Beta 1, I’d like to see improvements in client rendering performance from improvements in art assets.
Add LODs to Viking, Arthurian, TDD, bow models, including newly added variations. – Complete

Lots of progress over the last five weeks! We decided to reduce our testing over the past several weeks so we could really buckle down and focus. It’s really great to see the fruits of that hard work panning out and to show that to our Backers with these results!

Let’s move to art from this week. First up, we have some images of the work Scott and Sandra are doing on a mid pierce greatsword attack from Scott, and a unique longbow attack from Sandra. I wanted to start with static images this week, as the focus of these was stronger posing. We’ll have a video next week! 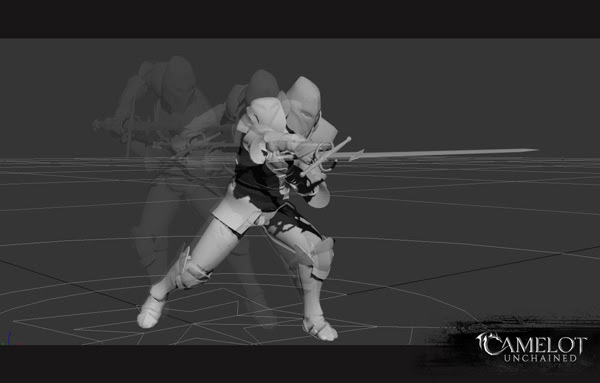 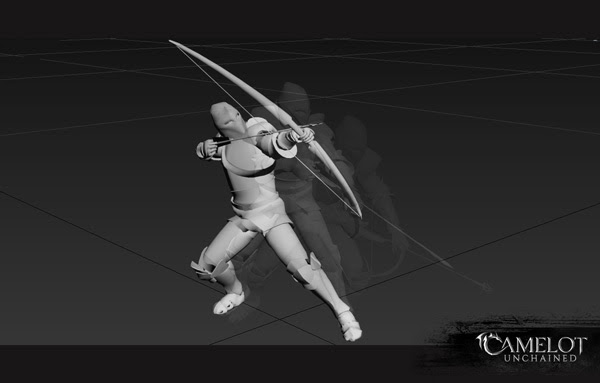 Next up, we have some concept art from Michelle of possible Arthurian ship ideas.

As mentioned in the update stream, Dionne completed some great-looking small plants. All her assets lately look great while still being cheap to render!

Jon continued work on the sculpt for the Arthurian basic clothing this week. 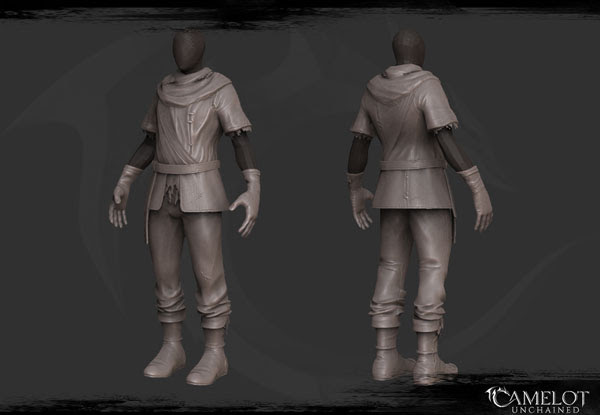 Jon was also able to complete a material pass on the previously sculpted scorpion bolt models. 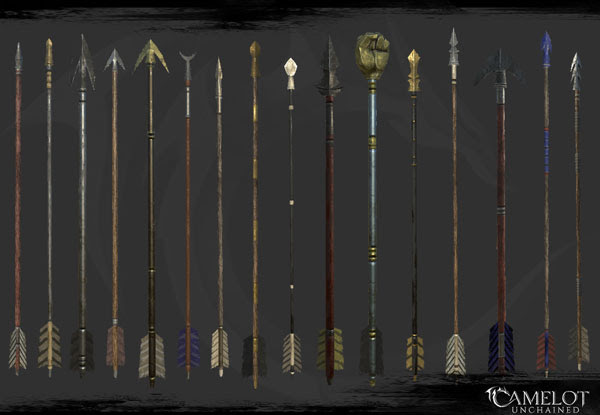 That wraps up the week for us here at CSE. I hope you’ve not only enjoyed today’s stream, the week’s highlights, aaannnddd the huge list of User Stories. All of this represents a lot of focused hard work from our team to deliver a great game. Have a great weekend all!