Happy Friday, all! As usual, we have a bunch of things to talk about in today’s update. Let’s get right to it!

First, we are still happily crunching away on the Beta 1 build candidate for our game. We are certainly not Beta-ready yet, but we are moving along nicely, as I mentioned in today’s livestream (https://www.twitch.tv/citystategames/v/56621416).

In terms of our biggest achievements this week, our lighting system definitely leads the charge. Below, I’ve got a number of screenshots to share with you, which will tell the tale much better than I can sum up in a few words.

Next, our new patcher is working great, and has been a big hit with our Backers. So, thanks again to JB and The Mod Squad for all their hard work, and it truly only gets better from here.  For those who haven’t seen them yet, here’s one of our Arthurian-themed images:

Also, crafting has been moving along nicely. It’s still pretty basic in its UI (/commands etc.), but is not just basic in terms of what you can already do with it. At the same time, Ben has been making a lot of progress getting the new components and abilities into the game. Beyond that, we have a list of fixes, improvements, etc. that we will save for our next User Stories update, but our progress has been excellent. One fun improvement was when Rob added doors to the game in a way that treats them as NPCs/combatants. That led to our ability to drown them with a water wall spell. Fun. Hmm, living doors, I wonder where they might fit in, deeper down the road?

Without further ado, it’s getting late here, let’s go to art world and check some things out.

First up, our thank you to our Mod Squad done, in all its ducky glory, by Sandra. 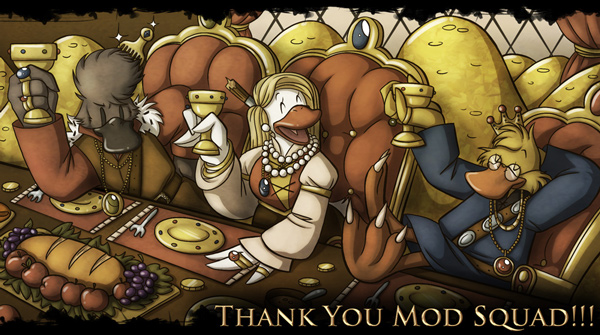 Next up, here’s some very special rocks. 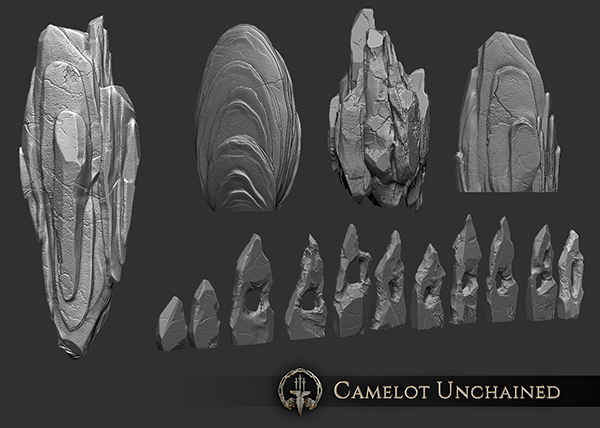 And here’s some more rocks. 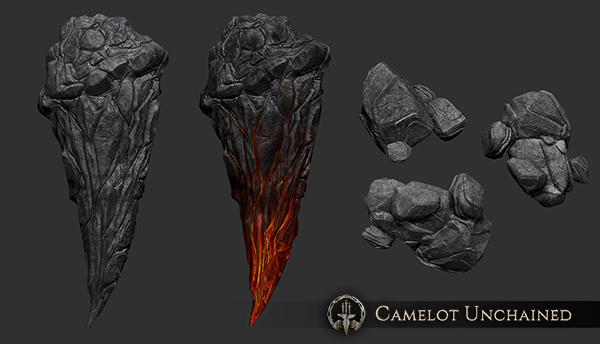 And a circle from a Place of Power. 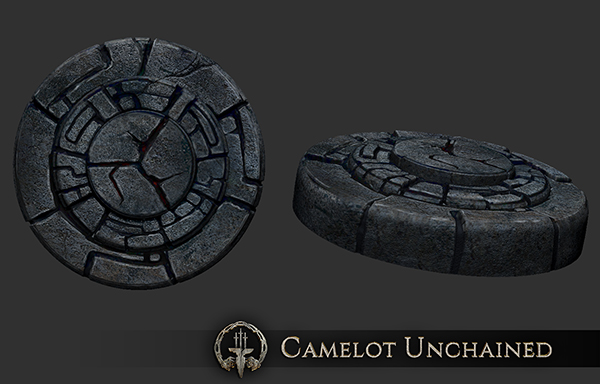 CUers cannot live by rocks alone, so here are some loot sacks from the game. 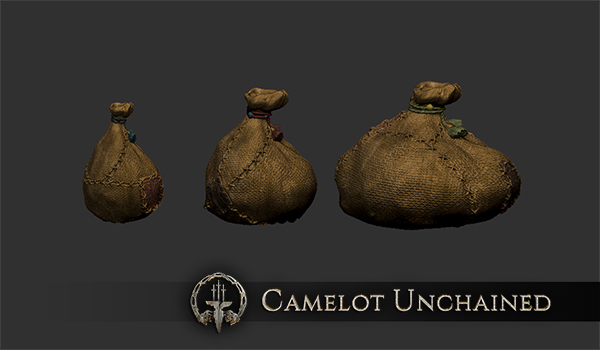 And since we are going into Beta 1, we need some placeholder items for things that you will find scattered around the world while we work on getting mines and other interesting places into the game.

We’ve talked about how we’ve been working on the lighting model for the game, and here’s a glow map. 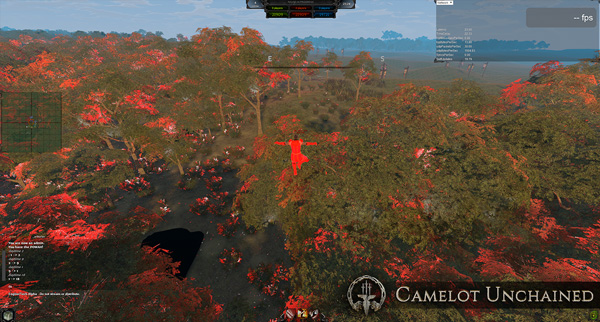 Here’s a materials test we were using in the game earlier today.

Here’s an example of how we can add glowing objects to the world, now. Tyler actually created these glowing mushrooms two years ago, but now we make them actually glow, along with the tree trunks. This is a good example, on a small scale, of how we have set things up ahead of time, in order to actually use them later on. Progress continues apace! 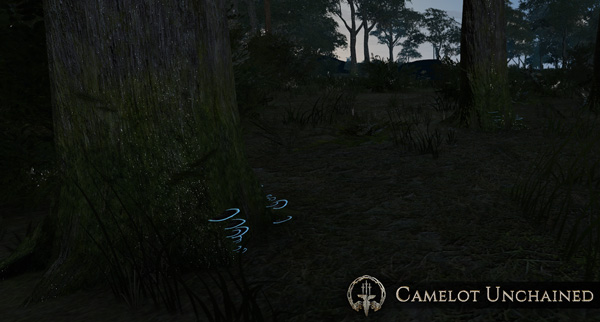 Here are two more screenshots (unretouched as always) from the current build of the game. 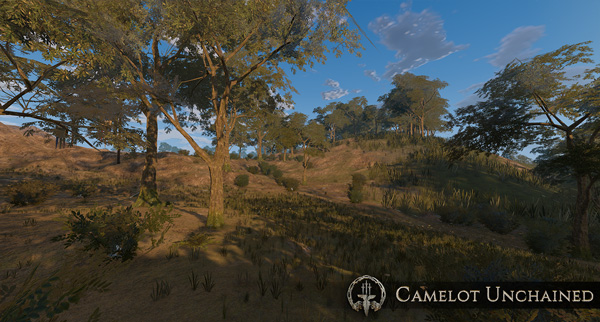 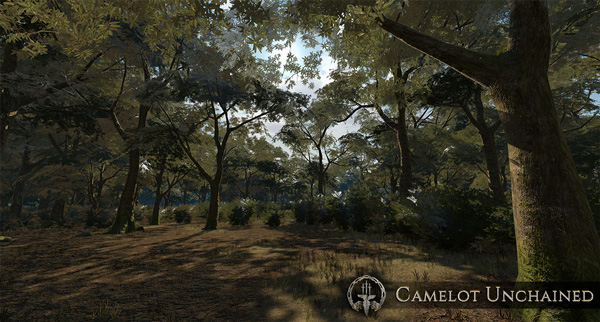 Just a wee bit better than we used to have, right? And we’re not even close to having a complete lighting system in the game.

How’s some new work on our Tuatha Dé Danann armor. In this case, some heavy armor. 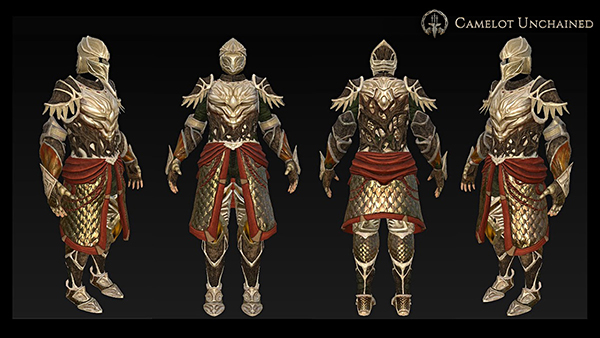 And to finish up today’s art/screenshot share, here’s something new and special from Sandra. It’s the first in what will be some fun comics about City State Entertainment and Camelot Unchained. We’ve been talking about doing this for more than two years, but better late than never, right?

So, let’s start this off with a four-panel strip. 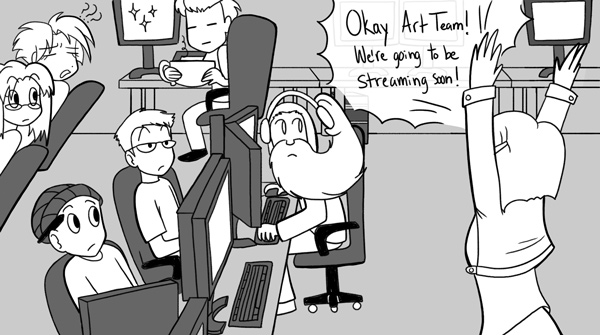 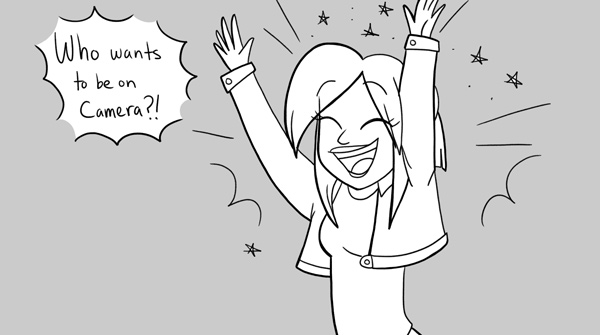 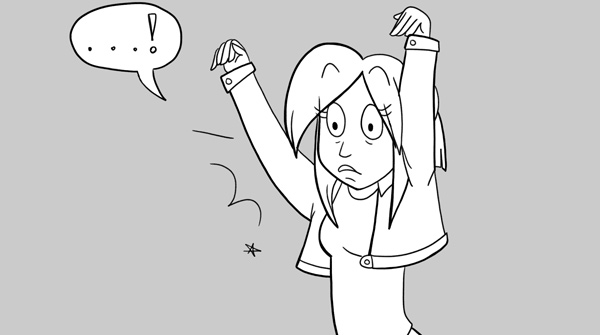 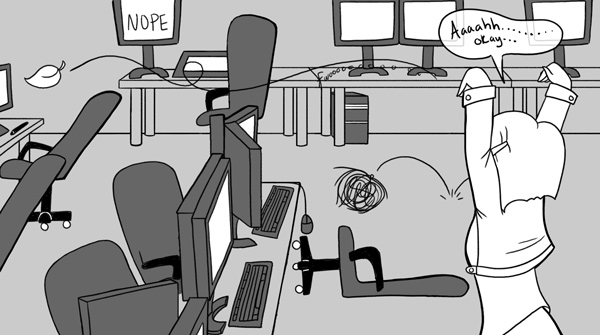 I hope you enjoyed it. Lots of LOLs in the office when she showed it to us.

That’s all for now, folks. We’re going to be working over the weekend, so we may turn on the cameras at some point, as we did last week.

P.S. Breaking news from Marc, just before we called it a night – “I just created the first crafted sword in the game!”