This week was fairly busy, partially because it included one of the largest code reviews in CU’s history! Lee’s path-finding work was not only massive, but very complex, and currently has five engineers helping to review it!

Obviously, this system is a big ticket item for our engine, greatly improving the capabilities of our NPCs!  And remember, this not only includes things like the spawned NPCs in the control point scenario, but any future things not directly controlled by players. Personally I’d love to get some wildlife moving around in our forests! Maybe some dangerous wildlife?

We’ll, of course, need to run this code through a whole lot of testing to sort out bugs and continue to improve it’s capabilities. We’ll let you know when that’s ready in a future test. Speaking of testing….

We are having a test this weekend focused on the Minstrel and Dark Fool. Here’s the quick details:

Please make sure and read the notes in the previously sent testing email so you’re aware of not only the focus of the testing, but also what has changed or is a known issue.

Stay tuned to the tentative testing schedule for updates next week!Here’s this week’s highlights!

For art this week we have a few new armor pieces. These are based off the previously shown concept art HERE. We had the artists start with a couple of one off smaller pieces this week. First off we’ve got a couple of Arthurian pieces, a knee guard (The boots are already in progress.) and pauldron. 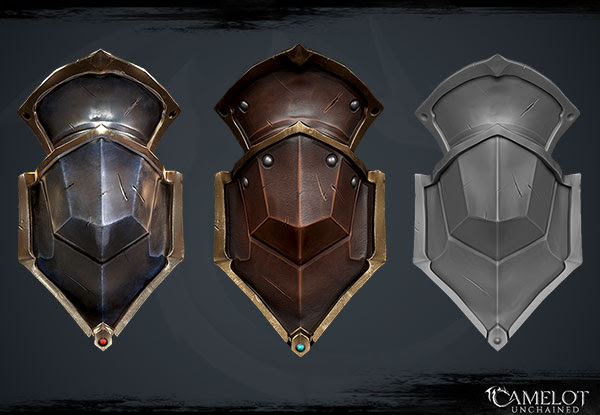 We had a happy accident with the above two items. These are supposed to be leather, but we accidentally put a metal material on them. Now changing the materials is fairly trivial, so we went ahead and included both versions in the images. However,  this mistake illustrates what we want the crafting system to do. The art, which is the more time consuming part, can be re-used with very different visuals, once we update the crafting system to output different visuals depending on the materials used!

I also had to ask which was the pauldron and which was the knee pad, because we also realized with a few minutes of tweaking these could work for both, giving players more options quicker, and allowing players to mix or match as they see fit in their outfits. So fun mistake!

And here’s a Viking medium armor pauldron, from the same concept art from Michelle. 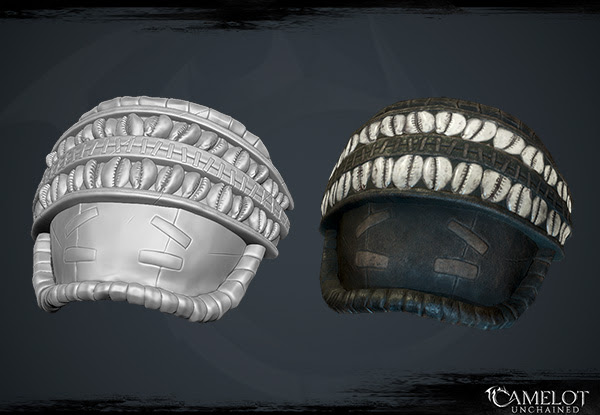 Last week we showed you some procedurally created snow and rock textures made in Substance Designer. Here’s a rock with a lava glow. The cool thing is the amount of “lava” in this material is literally a slider, making it very easy for us to generate lots of variations in minutes! 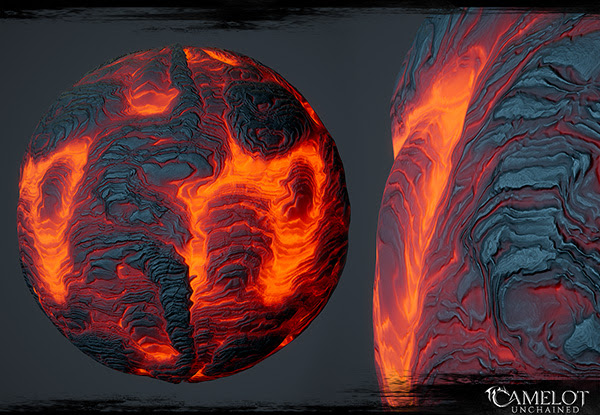 And that’s everything bright, shiny, and hot, for this week. Hard work and a fun mistake included! If you’re planning on joining us this weekend for our test, please remember to read the test related email. Again, we really appreciate the help testing and providing feedback and bugs in the forums.