Thanks to our great Backers, old and new, another Stretch Goal has bitten the dust. Now that E.A.R.S. is confirmed as a Launch Goal, it is time for us to lay out another Stretch Goal for our game. As I’ve been saying for months, E.A.R.S. was going to be the last Stretch Goal for launch content for Camelot Unchained for a while. As per my most recent Foundational Principle, we are not going to endanger the launch date of this goal just so we could add more stuff to the game. Our focus needs to be getting out a great game, and not trying to pile more and more stuff onto the game to raise more money. And, IMO, this Stretch Goal is a perfect example of one that will add to the game, yet should consume less time than if we don’t make the SG. How is that possible? Easy.

First, here is the actual definition of the next Stretch Goal, “The Sound Engineer Cometh!”

Secondly, What it boils down to is that if we were going to do what we did with March On Oz, we would handle all the sounds and effects ourselves. We would have to consume a lot of engineering time, and yours truly would, most likely, do a lot of the non-programming legwork, just as I did then. We would have to find the cheapest solution possible that still delivered enjoyable sounds and effects for the game. And, as we all know, that extra effort and cost has to come from somewhere. Well, if/when we unlock this Stretch Goal, we will be able to contract with an Audio Engineer, license a top engine, and have additional money to spend on buying/creating the sounds of Camelot Unchained and the three Realms. This will be one of those rare win-wins for both Backers and CSE that we will not have to come back to and say “Whoops! Now we have to delay the game for a while because the “INSERT STRETCH GOAL HERE” was harder than we thought to design, code, and deploy. And as per above, because folks like me and Andrew will have to spend less time making this goal happen, it will actually end up being a net positive for our development cycle. As I said, a rarity among Stretch Goals.

FYI, while we were working on the SG, Andrew had a great idea for a fun music video. Now, you can see this video as a plea to help us make a Stretch Goal, or as the work of a truly talented programming team who have no intentions of quitting their day jobs for a career in music (though we’ve heard that JB has already gotten offers to be the next “King of the Cowbell” for the Whatsamatter U. music department!). In the end, a fun time was had by all, and as long as we make the SG, you won’t ever have to see the CSE Band reunite! As to the link to that video, one that I think will be remembered forever by those who watch it here.

In all seriousness, speaking on behalf of everyone at CSE, we thank you for your support of this game, whether it be from before the Kickstarter, starting right now, or if your support comes going forward. Back in 2013, there were a lot of folks who doubted that Camelot Unchained would even fund. Then there were others who thought that we were going to be vaporware, especially when we had to announce the delay in Alpha Testing. Now, here we are with another Stretch Goal achieved, having completed an incredibly successful initial Pre-Alpha Testing.

The entire team here at CSE has lived up to the high standards that Andrew and I have asked of them. They work hard and long hours, and well, even if the chance of a CSE-led band getting on American Idol can’t be computed because it is so low (but non-zero), our engineers code beautifully, our artists make us gape in wonder, our designers are clever, our writer edits and creates glorious things, and our Community Manager has the good fortune to work with the best Backer Community in the industry. You folks have been incredibly supportive of us, generous with your donations, and helpful in so many ways, that we have always been and will always be grateful to you. So once again, and not for the last time, thank you so very much!

P.S. The reason I wasn’t in the band was simply because, well, that would have really been disastrous.

P.S.S. I had to add the duck picture again, it was just too much fun. 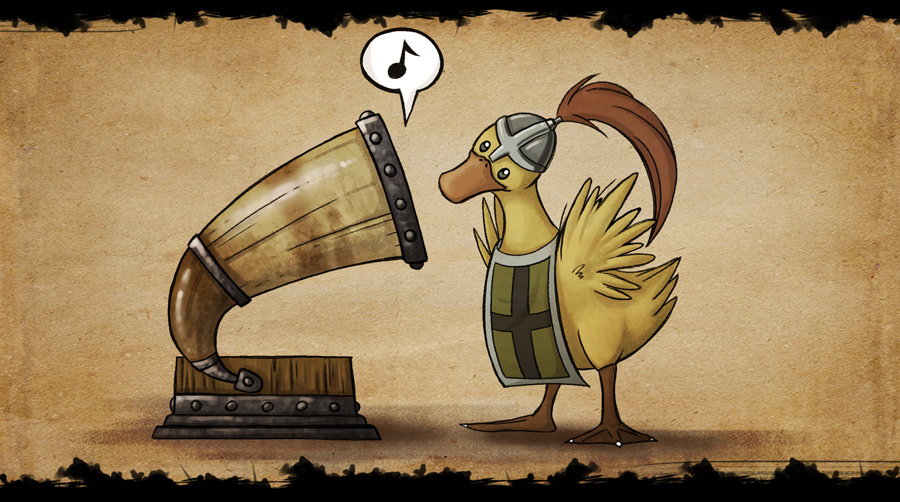 Join us on our pilot episode of Camelot Unchained coverage! The game that we have been following and waiting for to hit Kickstarter! The next episode will be…
Video Rating: 5 / 5