As the absolutely freaking cold weather from the north has moved in to beautiful, downtown Fairfax, Virginia, here’s some good news for all Backers of Camelot Unchained™ and CSE. Today the P.A.T. #3 list is coming down and the P.A.T. #4 list is going up here! As you can see from the new list, we have already completed a large number of this all important, and we hope, final P.A.T. list!

We are still in crunch mode here and work moves along nicely, building toward the opening of our Alpha Testing period at the end of the month. Will we make it? Will we have to delay the Alpha again? The truth is that I really don’t know at this point. It looks like it will be a very, very close call. If we get lucky and get a few things done ahead of schedule, we’ll make Alpha without major burnout. If we don’t get lucky and/or something weird and nasty comes up, we might have to delay it a week or two. The good news is we are close but then again, other devs, including myself, have thought that same thing in the past, so no promises. However, what I can promise is as I said last week, that when Alpha opens we will have at least one major feature that wasn’t expected to be in until this summer. And, it will be in a playable and quite unexpected state of development. Thus, when Alpha opens, our Backers are going to be able to do something not only ahead of schedule, but also in a way that we haven’t talked about yet. And, as Alpha progresses, it is safe to say that by the time summer comes along that major feature will be a lot further along than we thought it would be based on our last year’s schedule.

Other than that, not a lot to report on. 🙂 Next week Daniel “db” Beck starts work for us as CSE’s first full-time, sound engineer. Our previous part-time sound and full-time programmer guy, Patrick, did a great job for us in the past. As many of you might remember, Amazon snatched him away a while back so dB will be a welcome addition to our team. Hopefully sound/music will “spring” into the game next month.

So, as the icy grasp of winter refuses to let go of so much of North America, think of us, your favorite neighborhood (if you happen to be stuck in NoVA like we are) developers diligently working to deliver a fun and playable, old school Alpha to you, our wonderful, outstanding and amazing Backers (You’re not only handsome group, but a powerful group of Backers. I could see the second you all walked in here, you were a group to reckon with!). Okay, shoot me, I couldn’t resist another movie quote.

And while you are thinking about that, here’s a couple of screenshots that should give you a big, giant, hint as to the feature that I’ve been referring to. As to the manner of the implementation, I’ll let you guess at that and I know you folks are really, really good guessers. BTW, IT folks, if you haven’t jumped in lately or been to our Forums (especially the IT section) I recommend you do so immediately. You’re missing out on some fun.

For today’s screenshots, first up is a screenshot of the inside of a house. FYI, this is only iteration #1 of the building system, we’re making major additions to it over the next ten days.

And here’s something else our IT folks figured out how to build. Does it bring back any memories? 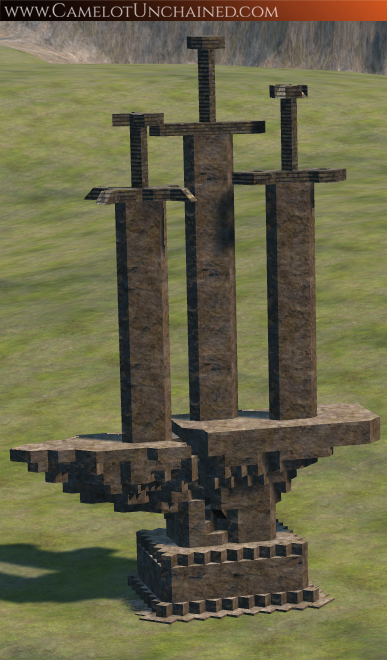 And keep in mind that this is simply iteration #1, there’s a whole lot more going into this system even before the end of the month. Simply check out our P.A.T #4 list here for more information, hints and yes, some teasing I guess.

That’s it for now…

P.S. Ben and I have spent a lot of time this week talking/iterating on the magic crafting ability system. Can’t wait to hear what you folks think of it. That too is coming soon!

P.P.S. For those that don’t get the “You’re a powerful group…” check out movie quotes from — Pretty Woman.