Today’s update is brought to you live and uncensored from the infirmary formerly known as City State Entertainment. For the past few weeks, we have seen more colds, flu-like symptoms, head-spinning (and not in a good Exorcist sort-of-way), and other plague-like illnesses decimate the studio. Yesterday, for example, half the studio had wandered down to their local M.A.S.H. unit for treatment. One of our fine folks, the intrepid designer Ben, had to be admitted to the hospital for a collapsed lung. So, to say that this has been a rough couple of weeks here is a gross (literally?) understatement. Today is a little better, but still, almost half the programming team is down and out in Virginia. Here’s hoping that next week, everyone is much better!

OTOH, we have some really good stuff to share with our Backers this and next week. This week’s update is the first concept art for what we expect our mages will look like when they are casting their spells. It is important to keep some things in mind before looking at the concept art.

1)    It is vitally important that our players be able to read and react to what opposing players are about to do, so they can react to it. Thus, we need to implement a casting system that allows opposing players to do just that.

2)    Since we are a small studio, we need to be smart about where we put our resources. Devoting too many resources (animations, VFX, modeling, textures, etc.) to spellcasting doesn’t make sense.

3)    We need a system that can work with the very flexible spell-crafting system we hope to implement. As such, and keeping (1) and (2) in mind, it should be something highly reusable.

Keeping all this in mind, the first image I want to show you is of a Viking mage. This image has three key parts to it, each highlighted by a circle and a letter from A-C. To start, let’s look at circle A.

Circle A is focused on the Components (in this case, runes) that are currently floating around the head of the mage.  These Components are what make the spell do its magical thing. As per our BSC Daze, these abilities/spells are crafted by the players from Components that they learn and earn from the game. These Components can be identified by other players from a reasonable (not decided yet) distance and help lend immersion to the game. Now let’s move on to Circle B. 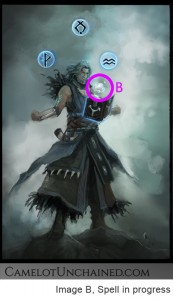 Circle B shows the spell being formed. Our intent is that not only will the Components be floating above players heads, but you will also be able to tell what spell is being cast by actually seeing it formed above the spell book. The progression of the spell might be shown by the spell coalescing and growing during its casting time. Now, on to Circle C. 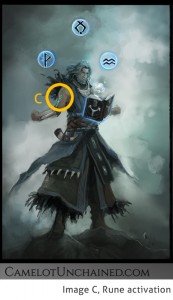 Circle C shows a Component lighting up on the Viking’s arms, which was one of the concepts we talked about early in the Kickstarter process. It was also the core mechanic in my 2nd MUD, Dragon’s Gate, in which runes were embedded in a player’s arms and spells were made from those runes.

Here’s a shot of all three Realms’ casters in action. 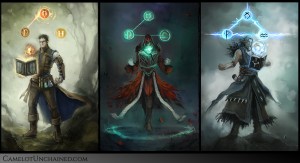 Now, there is also a bit more to the system. We also hope that the runes above the caster’s heads can also interact with each other, as shown in this concept piece here.

As you can see, the Components are linking up with each other and the power that flows among them increases. This will be another visual indication the spell is about to be cast.

Now, how does this all fit in with the three points above.

1)    Identification – This system provides a number of different ways for players to know what spells other players are casting, without resorting to UI elements or textual info. Whether it is the floating Components, the spells themselves, or etc., players can quickly scan other players’ actions visually. Also, it will cut down on some of the visual noise that can happen when you have a lot of pre-activated abilities being cast. It allows players to more easily learn what the other players are doing, and since this isn’t effect or color-based, it will work for all players.

2)    This system does provide a lot of reusability for us. Even with all the possible Components we have, creating the Components is a lot less expensive resource-wise than creating all the effects for having unique spell effects before, during, and after the casting of the spells. Using the spellbook as a canvas also provides a stable and consistent platform for the effects.

3)    Well, this is a pretty flexible system: all we need to change is the runes and spellcasting effect, and off we go.
If we can pull this off, it will also add to an immersive feeling in the game. And let’s face it, it will be cool to see floating runes, spells being created, etc. as you survey potential targets, deciding which one to attack. It will also provide a way for us to have a very robust system at a lower cost in time, money, and resources.

As a bonus for today’s update, here’s some updated concept art from Sandra and her time-based mage. Gets more interesting all the time, no? 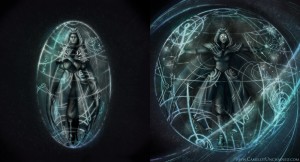 And that’s it for today’s update, other than that I want to share another screenshot from the current build of the game. One of our Backers decided to use our very rudimentary building system to add caravans to the game, sort of. 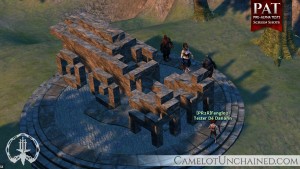 Enjoy your weekend everybody!

P.S. Okay, I lied. Here’s a couple more piece of concept art. First, up an Arthurian mage in a spell progression. 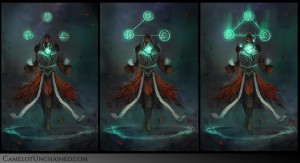 An interview with Mark Jacobs! How about that? Join us in a 2 1/2 hour long discussion about the amazing upcoming game from City State Entertainment where we…