It’s been yet another great week at City State Entertainment. Our new engineers are already diving into the code. They are making a positive impression on us, as well as making a positive impact on our code base. They have definitely hit the ground running, in a good way. ☺ But fortunately for us, they are not the only programmers on the team, and the entire team has been very productive since the last update. As of right now, we are holding off on announcing a playtest this weekend, until we can make some improvements on the current build. When and if we get to a testing point (which we all want!), we’ll let you know. For now, keep an eye on the forums for further updates.

In terms of big news this week, we had an update on our class system:

And we’re off! The Fall Season of Class Presentations has begun! As revealed on our Twitch Channel (http://www.twitch.tv/citystategames/v/17411597), and now on our YouTube Channel (https://www.youtube.com/watch?v=ivyWUXEMrn0), Camelot Unchained™ is going to have a wee bit more classes than we originally planned to have at launch. How and why we are going down this path is in the video (and it really is worth listening to, even if I was a bit under the weather at the time). The TL;DR version is that we are going to be making our class system a bit less symmetrical than it was before. What that means in non-game designer lingo, is that not all of our classes will have the same number of paths/ability lines/trees/insert your fave word here, when we launch the game.

In terms of some of the other reasons for this slight change, I’ll summarize some of them here:

1) The more we thought about the Path System, the more apparent it became that we would have to make some sacrifices in overall quality of the classes, to make them fit together fairly across all the Realms.

3) We believe that while a symmetrical Path System was a cool idea, we would have lost some immersion/RP/fun stuff, as the main classes were going to be a bit too generic, in favor of the Paths themselves being more interesting.

4) That balancing all of the Paths was going to be a more-than-major PITA, and we would end up sacrificing quality even more to make it happen, by making less-challenging Paths.

5) That the symmetrical Path System was going to make it more difficult to add new classes post-launch.

OTOH, we believe that going with a modification to the current Path System has a lot of advantages:

1) We can add unique gameplay/classes without worrying about making sure that all the classes have the exact same number of Paths. Thus, as per our stealth reveal, we want to make the scouts more limited in terms of the number of Paths they could have, and focus that class on some very unique gameplay mechanics.

2) Stronger thematic classes. There will not be a need for a more generic class. Now, each class will have a very strong theme. This will result in players having an easier time identifying with the class, as well as understanding the role that they play in the game. After all, this is an RPG, and role is quite important.

3) Balancing is going to be a lot easier, in every sense. One of our real concerns with classes that had 4/5 Paths was that all of the Paths had to be equally great. This would have led to a lot of balancing/rebalancing, because of the combinations that were possible per class. While we still believe we could have done that, we believe we’re going with a better approach for both the short and the long term.

4) Adding new mechanics/Paths over time will be easier. If each class doesn’t have 5 Paths, it will be easier to add new Paths. Additionally, because we are willing for the Realms to take a less symmetrical approach, it also means that if we decide to add a Path to a Realm, we don’t necessarily have to add two more to the other Realms.

5) Adding new classes over time will be easier. As per (4) but also because we can add smaller classes, with fewer paths, because we think that the new classes can add to the game even though these new classes don’t have 4/5 Paths.

8) Remember (1).
Now comes the really fun part. Over the next 10 weeks, our Backers will be able to be able to choose which trio of classes (one trio per role) they want to see next. To do this, all the Backers need to do is answer an email survey that will be mailed to them each week on Friday. The following week, the trio that has the highest number of votes will be revealed. And then the process will begin again!

Participation is totally voluntary, of course! In the meantime, if you haven’t been to our new class page yet, here’s a convenient link (http://camelotunchained.com/v2/class-reveal-votes/)! Also, because of the feedback we were getting on our Twitch stream, Michelle has made a series of wallpapers based on the silhouettes. Head here (http://camelotunchained.com/v2/media/wallpapers/) to check them out and download them.

One last thing to keep in mind over the next 10 weeks. We are basing so many of these classes on the lore, myths, and legends of the respective Realms. I hope that almost all of you agree, as you read about the classes, their themes, abilities, etc., that you feel the stirrings of Realm Pride beginning already. While Class Pride is not the only component of Realm Pride, it is an important one. I hope you will agree that we are starting to build this Pride, the right way.
User Stories:

In terms of User Stories, it was another good effort by the entire team, including our new senior programmers!

As a Backer I’d like to see general improvements in C.U.B.E.’s interface and functionality.
Add ten more materials. – Complete

As a Backer, I’d like to see improvements in the animation system to facilitate gameplay.
Remove dependency on bone naming to reduce risk in rig improvements. – Complete

As a Backer, I want to be able to own a plot of land and build within it. – First Pass
Players are limited to one plot at a time. – testing purposes.
Limit maximum number of blocks that can be placed in a plot.
Lose plot ownership on death – for testing purposes.
Plot owners can now set permission of who can build on their plot: Self, Realm, and All.

As a Backer, I’d like to see the world begin to be propped out with generic fantasy items. – Set #3.
Paintings for wall art.

As a server Developer, I would like the user proxies to dynamically scale.
Get CPU metrics back from servers about how much load the server is under. – Complete

Another good update to our User Stories, eh?

In news from our art team, Jon has been working on our female model, and he did his usual great job. Here’s a WIP: 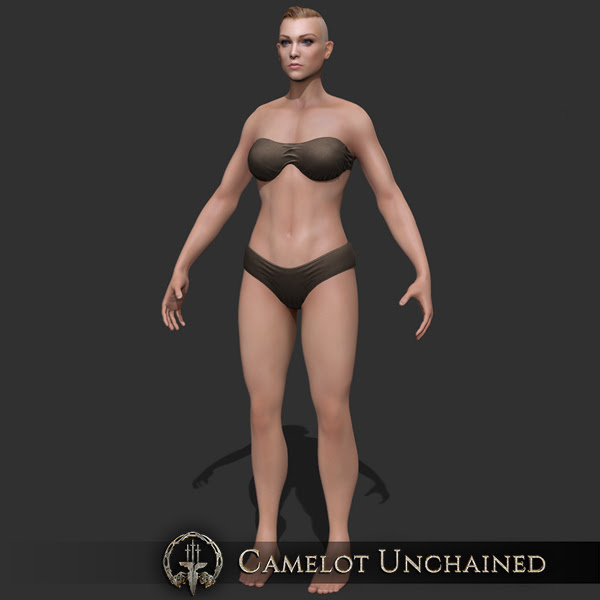 Sandra was busy too, and here’s a sampling of her work on TDD armor sets. Remember folks, these are still just concepts: 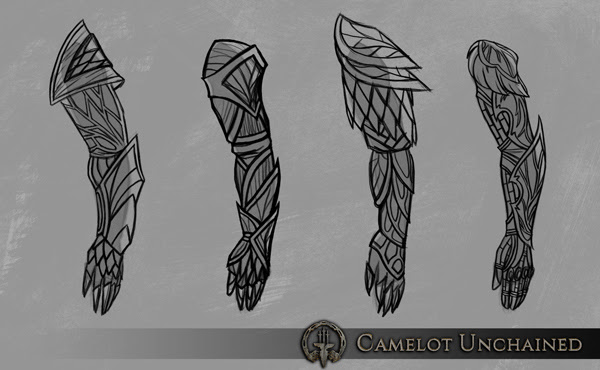 In the final bit of news, I’m up in the Granite State, in Portsmouth, with Lady J for a few days of R&R. If you are up in that area and want to get together, head over to our Forums and find the meet-up thread in the Announcements section. The current plan is to get together on Sunday, late afternoon/early evening, so if you are in the area, let us know, so we can make the appropriate arrangements.

That’s it for now. It’s been an outstanding couple of weeks here at CSE, and as we move into fall, the leaves may be turning and temperatures dropping across the US, but here at CSE it’s…