A Fantastic Friday to you all! It’s been a helluva couple of weeks here at City State Entertainment. So much good stuff has happened that it is hard to recap in just a few paragraphs or so. However, let’s give it a shot before we move to new stuff and more new stuff.

First, our new terrain system completed an awesome shakedown cruise. Running 113 hours without a crash would be considered a pretty good start for a game in its final days/weeks of Beta, but is even more impressive for a game that is still in Alpha. And when you add in the fact that we have built almost this entire engine from scratch, including the procedurally generated terrain system that was at the heart of the test, that is a very impressive start.

Secondly, the travelling road crew returned from Dragon Con in Atlanta intact but not well-rested. One does not behold the face of the dragon and sleep, after all!

A friend of CSE recorded the panel on her phone, and we posted the video here or

If you are interested in the “origin stories” for some of the CSE crew, it’s worth a viewing. Plus, there are some hidden gems in the video that might be worth digging for.

In terms of other studio news, well, there are a couple of good pieces that we are saving up to spread joy-joy feelings throughout the CSE Community next week. It’s all good news, and we will talk about it next week in a livestream. Remember to check your email, spam folder, Forums, or smoke signals coming from our headquarters in beautiful, downtown Fairfax, VA. Actually, summer has broken, at least for a week, and the weather is quite beautiful right now.

In terms of our ever-popular User Stories, considering the short week and the fact that some of the studio’s principals were out of the office for a few days, it was nevertheless a very productive period for us. Overall, we had 10 existing cards with 25 completes, while adding 5 new cards with 29 completes.

Existing Cards:
As a Backer, I’d like to see general improvements in C.U.B.E.’s interface and functionality.
Stop saving block icons to disk. – Complete

As a Backer, I’d like to know about smaller changes that don’t have their own user story.
Jump costs stamina. – Complete

As both a Backer and developer, I’d like to have more dev commands to facilitate testing, and general interactions with the player community.
Admin’s can trigger old abilities for testing. – Complete

As an Italian Backer, I’d like to visit the Italian version of the Camelot Unchained website.
Find a group of awesome Italian-speaking Backers to assist us! – Complete
Site navigation text translated. – Complete

As a developer, I’d like a way to be able to edit gameplay variables on the server, live.
Max block limit on building plots. – Complete

As a Developer, I’d like to have the tools and knowledge necessary to create terrain Biomes that change with Realm territory control.
First Pass: Grass and flower sets for testing. – Complete
Improvements to grass assets – Costs 2/3rds less, but 2x as dense! – Complete

As a Backer, I would like to have information about the classes of Camelot Unchained.
Silhouette artwork for ‘deck of many classes’ cards. – Complete

So, a pretty good update from us. Just like the changing of the seasons, one following the next, we are shifting our focus from “more tech than game” to now, “more game than tech.”

For today’s art, here’s a quick concept piece from Sandra for an initial pass on some capes that the well-dressed Viking might be wearing this fall. Now, whether you heed the words of Edna ‘E’ Mode or not is up to you, of course, but if you don’t worry about such things, here’s something to keep in mind: 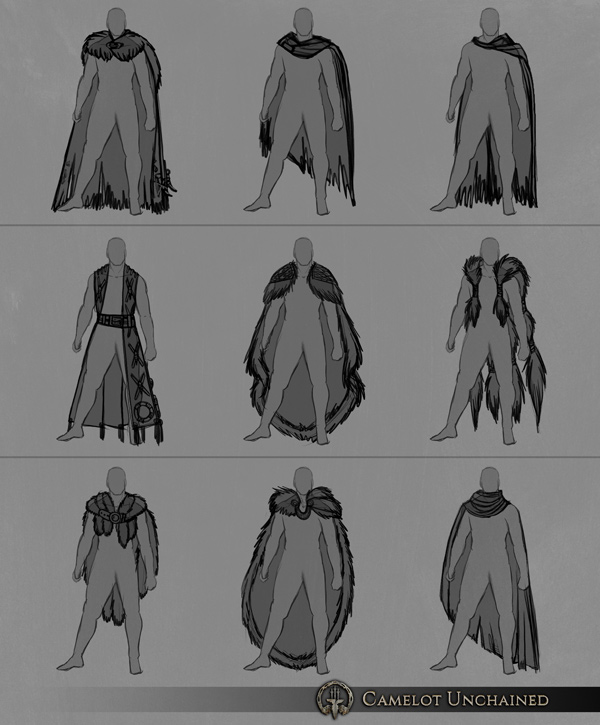 Accessorizing is the key to success, whether in fashion or in RvR, and here are some new renders of some helpful and handy accessories for our combatants. You may notice that these weapons appear to share the same materials which is in accordance to our crafting design. 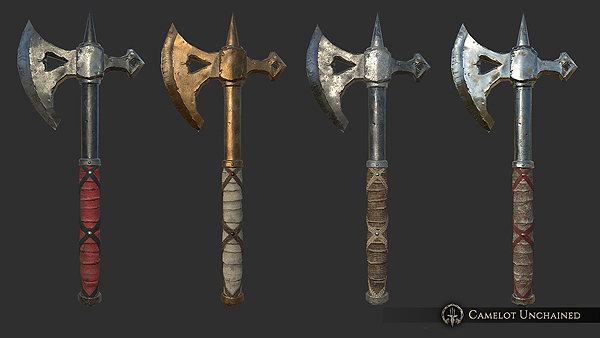 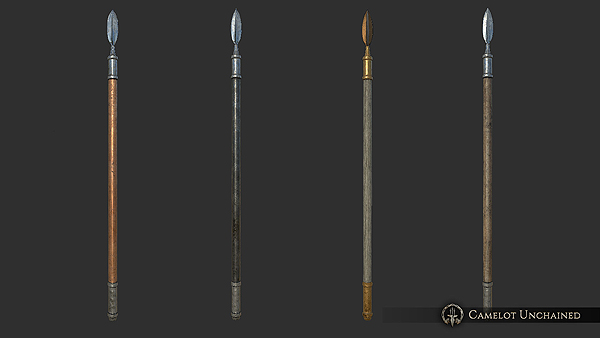 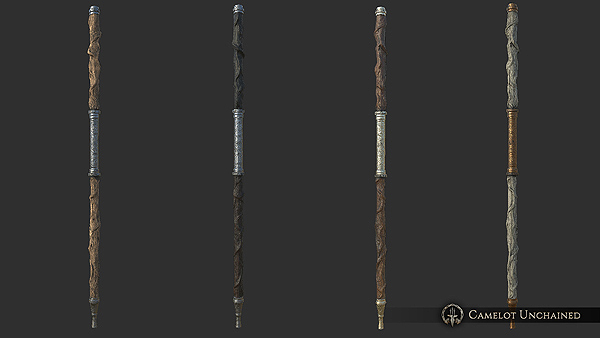 And now, for something completely different, some halberds. 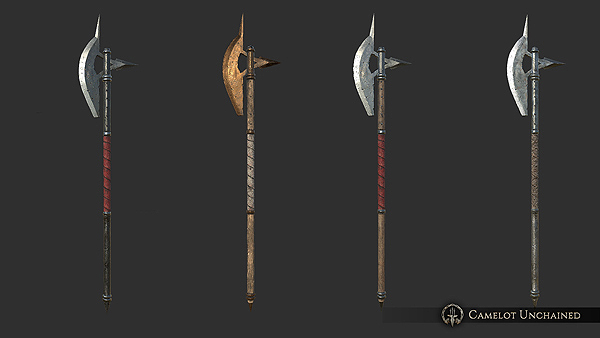 Well, that pretty much wraps it up for today’s update. Because of all the bonus time last weekend, we are going to wait till next week for the next installment of our Friday Night Fights. We will leave the servers up this weekend for the Alpha folks who haven’t seen Version 0.1 of our new terrain system.