We’re here at ground zero for this season’s first major snowstorm. Whether you call it Snowpocalypse, Snowmaggdon, or my new personal favorite, Snowniño, this storm looks like a whopper…and not what used to be the tasty grilled burger from my youth. Instead, this looks like a storm that will shut down the Washington, D.C. Metro area for days. So, with that storm bearing down on us, I wanted to get this update out before we all head for home. Unfortunately, because of the storm and the expected power outages, we’re not going to run a Friday Night Fights this weekend. Too many things could go wrong, and frankly, it wouldn’t be a smart thing to do for us given the uncertain state of our power grid (my area will probably be without power the whole weekend, if things proceed as usual). However, that’s the only bad news in this update, so let’s get to all the really good news.

First, our new website is in its final state of testing. If it wasn’t for the storm, we’d put the site up today, but just like our game, it just doesn’t make sense to do that when many of the people who would need to fix problems could be without power. We’ve been getting tons of feedback on it, first from our IT folks, but now from anyone who heads over to our Forums (hint hint hint). Assuming that the studio reopens on Monday, we’ll open the website for everybody then.

Secondly, and much more importantly than our website, our new animation system is now in the game. Now, before everyone gets too excited, this is just the underlying system, so far. As always, we want to make sure that the tech is solid before we turn Scott and Sandra loose in creating all the new animations for the system. Our goal remains to have animations that look like those in the video that we showed off, and we don’t foresee any major roadblocks in getting there. Over the next few weeks, we will be slowly adding new animations to the system and seeing how things go. We have a huge list of animations that we will need for the game, and not just for combat, but also for fun things such as emotes. Now, I could talk about this system for paragraph after paragraph, but I prefer to turn this over to Scott, our lead animator:

“Today, I am thrilled to tell you that our engineering team, and in particular James Brown, landed the code and editor interface to allow me and the team to implement our new animations and weapons into the game! Back in August of 2015, I posted a video update here regarding the state of animation within Camelot Unchained. This video illustrated our vast collection of weapons and prototype combat animations smoothly blending between the character’s upper and lower body. At that time, we didn’t have a system in place to support the visuals depicted in that video, and were waiting for tech to support art. Now we do have that support, and let me tell you why we are all excited about this new animation system.

We can finally import combat animations in a way that will allow the player’s character to behave correctly, based on directional movement and equipped weapons. We can now have characters wielding shields, right and left handed weapons, switch between combat speed and a full sprint, and more. In addition, this new combat animation system allows us to dynamically influence the length of combat preparation and recovery times by the character’s stats and abilities. This system also gives us the flexibility to support new weapon types, such as a bow that requires a different sequence of animated procedures (i.e. draw and un-draw a nocked arrow).

The engineering team also took this R&D time to optimize how animation is applied to characters en masse. They incorporated smart ways to apply levels of detail (LOD) to skeletal bones and animation at distance, ultimately improving memory performance and stability.

Now that we have this system in place, we can migrate our new combat animations and weapons for testing – and testing is where the fun really begins!”

He sounds pretty excited, no? Well, we’re all pretty excited too! As I’ve said in other updates, having a great animation system for our game has always been important to us, and now our goal is in sight. As always, building an engine from scratch is a pretty daunting task, but just as we delivered on building an engine that can already handle larger-scale battles than most MMORPG engines, we’re closing in on delivering on our animation system as well. As always, we thank our Backers for their patience, and depending on how things go next week, the next time our Backers are in a Friday Night Fights it will be with the new animation system.

As always, we have a heaping helping of updates to our User Stories. Lots and lots of good stuff in there: 18 old cards with 69 completes and an additional 10 new cards with 47 completes!

As a Backer, I’d like to test the updated female Valkyrie model.
Create textures. – Complete

As a Backer, I’d like to test the male Valkyrie model.
Create textures. – Complete

As a Backer, I’d like to know about smaller changes that don’t have their own user story.
Give bots a new move mode: Scatter upon login, then occasionally all move to random region. – Complete
Bots cast less when far away from targets. – Complete
Bots pick new random location to move to when they’re trying to move and can’t. – Complete
Add collision to control game spawns. – Complete
Add Visual Studio 2015 to api/account page. – Complete
Restructure database in code so servers and tools opt-in to only connect to databases that they use — resulting in faster startups. – Complete

As a Backer, I’d like a UI that is easy to develop mods and themes for.
Refactor announcements ui module. – Complete
Update events system in UI library. – Complete

As a German Backer, I’d like to visit the German version of the Camelot Unchained website.
Class Reveals translated. – Complete

As a Backer, I’d like a more efficient and optimized animation system that provides more focused support for the specific needs of Camelot Unchained.
Bug Hunting: Fix all the Math – First Pass – Complete
Animation Performance: Use minimal bones/bone counts. – Complete

As a Backer in Beta 1, I’d like to play as a Crafter with basic gathering and crafting mechanics for testing.
Second pass concept: Vox Magus UI – Complete
Additional Vox interface/tool art concepting. – Complete

As a Backer, I’d like to see the world begin to be propped out with generic fantasy items. – Set #5.
Additional generic bushes. – Complete

As a Developer and Backer, I’d like to see improvements in memory usage and threading.
Rewrite delayed destruction to run on ParLL – Complete

As a Developer, I’d like to increase physics performance, as well as make changes easier to integrate.

As a Backer in Beta 1, I’d like to have a sampling of Viking light, medium, and heavy armor to wear in game.
Select armor to create from sampling of previous concept art. – Complete
Collate selections into spec sheet for artists to work from. – Complete

As a Backer in Beta 1, I’d like to have a sampling of TDD light, medium, and heavy armor to wear in game.
Select armor to create from sampling of previous concept art. – Complete
Collate selections into spec sheet for artists to work from. – Complete

As a Developer in Beta 1, I’d like to see improvements in the ability system’s stability and robustness, as well as make it easier for developers to work with.
Replace the old text templates with a new Roslyn based one. – Complete

As a Backer in Beta 1, I’d like to play in a Group, Guild, and Party
First pass Vision and Design doc. – Complete

Like I said, lots of good stuff in there, right? As always, we want to overshare our development process.

On a personal note, I’ve been diligently working on the next version of the crafting and grouping systems for the game over the past couple of weeks. As to the former, we’ve got a fairly robust Microsoft Excel version of much of the crafting system working already. I can build any combination of the 25 materials I’ve modeled so far and use a blueprint to create an updated item.

In the meantime, players will be able to play around with most of the major aspects of the crafting system. A simplified system to be sure, but what’s important is getting players in and testing ASAP. The bells and whistles can come later, but the balancing of the core item-making pipeline needs to be tested as soon as possible. The tl;dr version is that at the opening of Beta 1, players will be able to craft a limited set of items out of a limited set of materials that will have a limited amount of effects on the item. BTW, it is quite satisfying for me personally, because this will be the system I always wanted to create, starting from my MUDs, Aradath and Dragon’s Gate. So, it’s nice to see it coming together as I always knew it could.

As to the grouping systems, once they are finished and put into the schedule, we’ll have a presentation of them for our Backers. So far there’s not a lot of BSC stuff there, just a good solid foundation with a couple of interesting bits. I can’t imagine that most people will be surprised or disappointed with the path we are going down. These systems are not rocket science, but they have to be robust, and I think we can create what I’ve laid out so far. Please don’t expect a “Living Guild” system like WAR, but you can expect systems that will meet the majority of our Backers’ needs and wants, and are designed for the game we are making and the audience we are making it for. 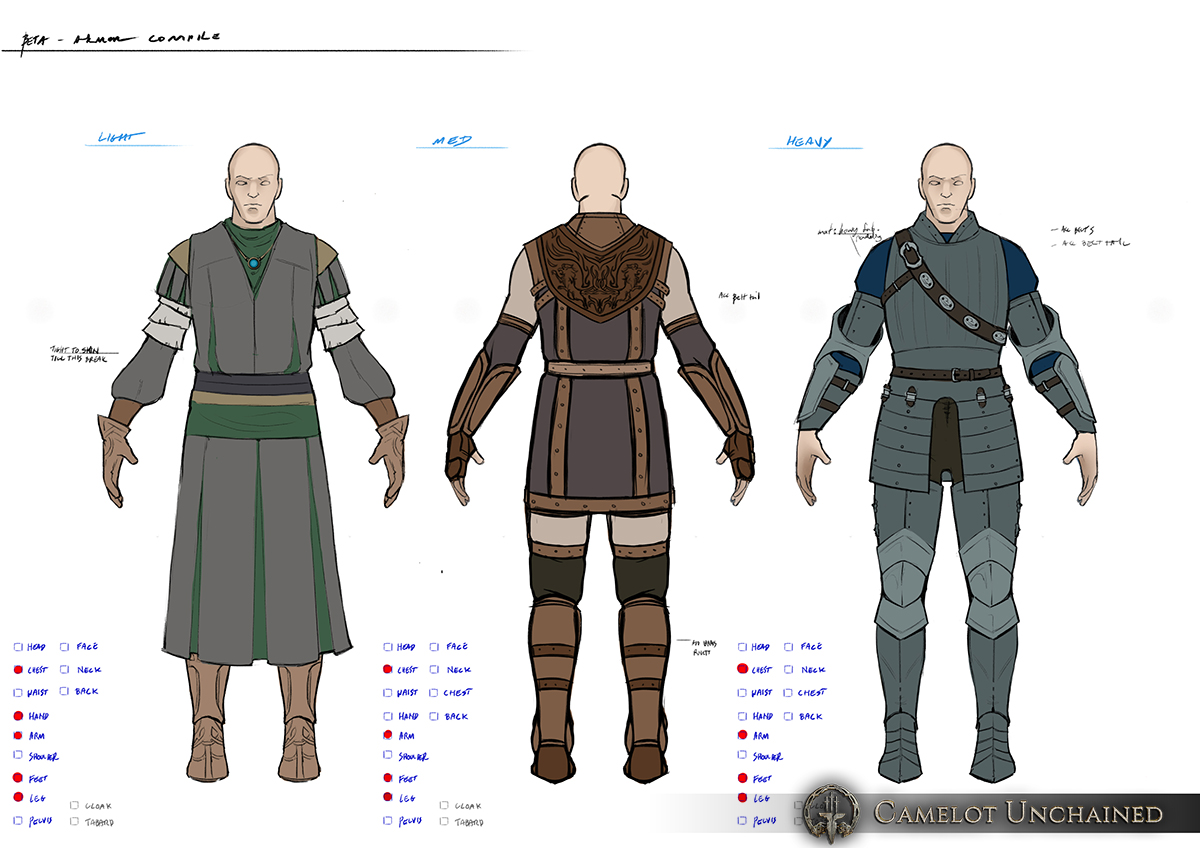 Next, here’s Jon working on taking those layouts and making them come alive. 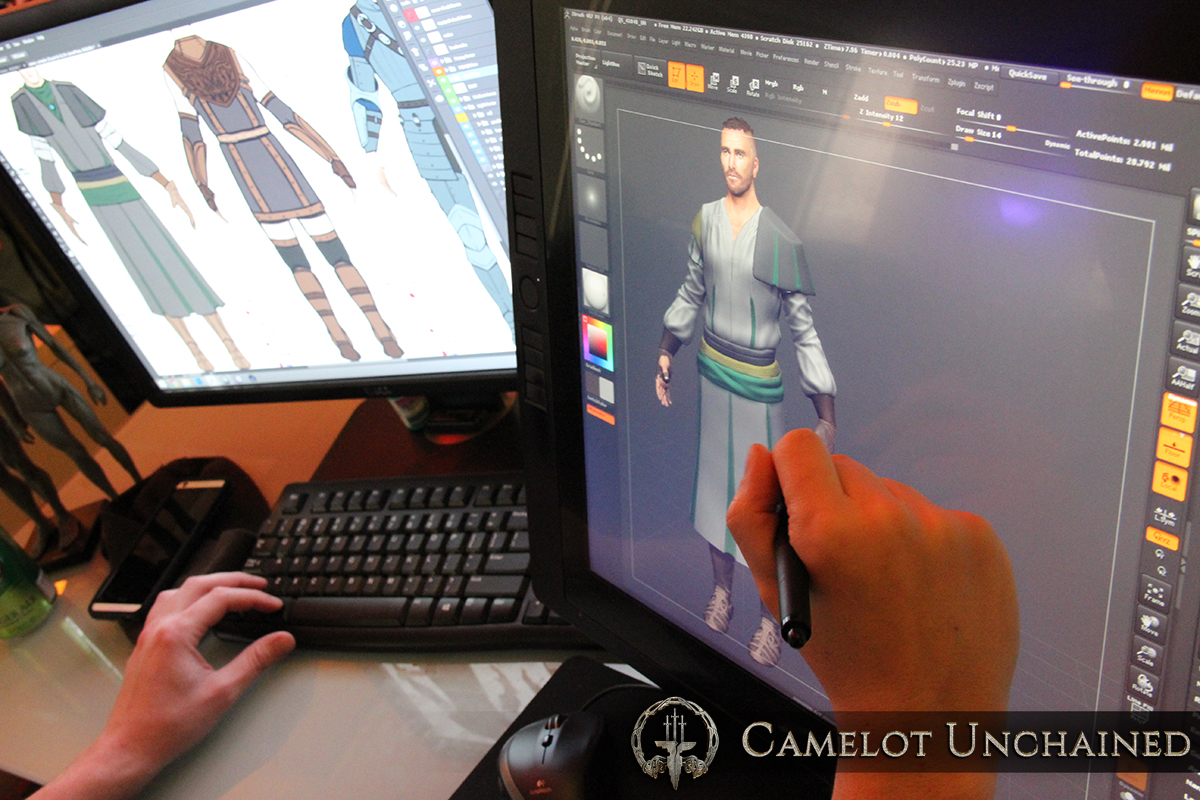 Next, a few other concept art pieces. 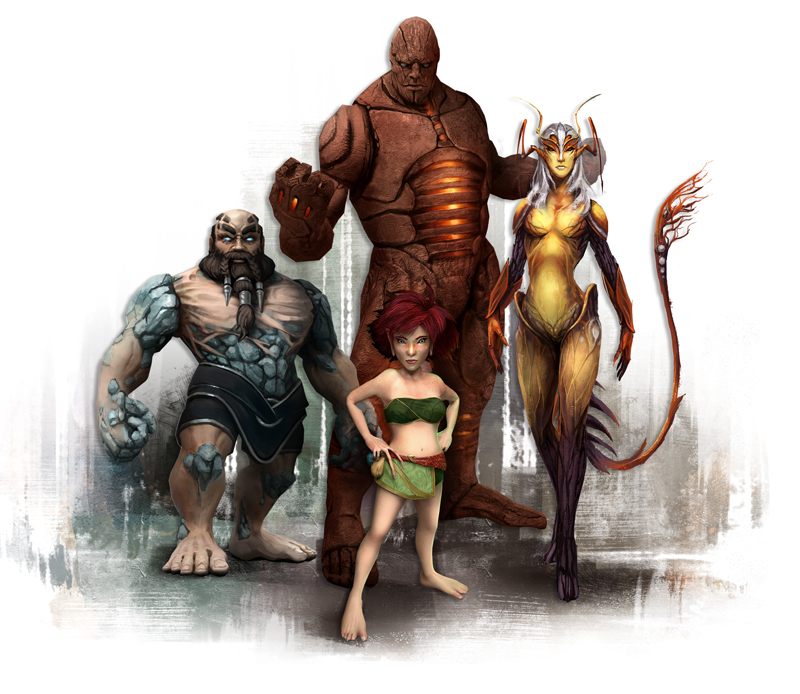 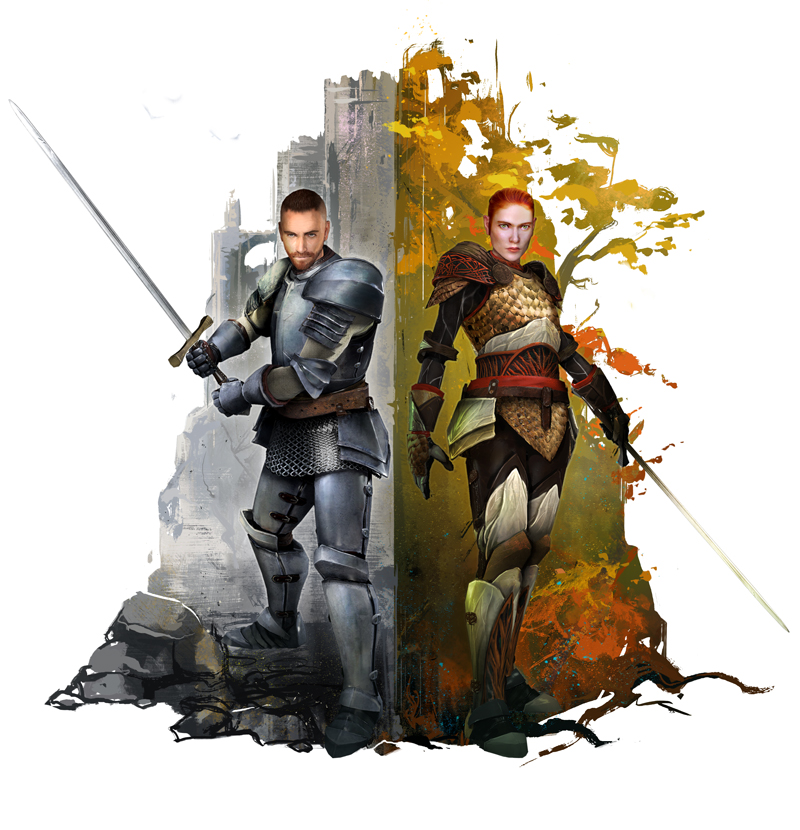 The final piece is one of my new favorites from Michelle. It’s a Valkyrie who is lying in wait for an enemy. 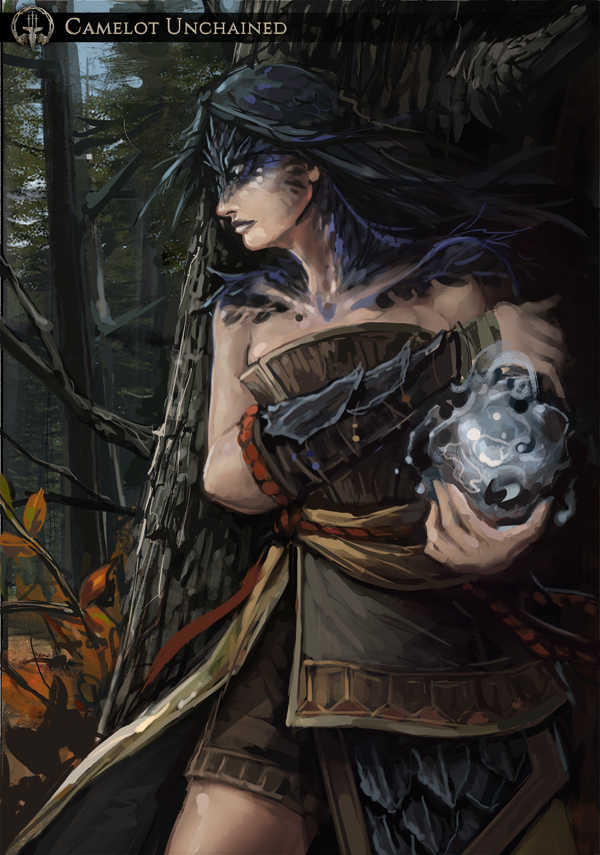 Well, wish us in the Washington area good luck with Snowniño. It’s going to be an interesting weekend here, that’s for sure!