Time for another big end-of-the-week update from your friendly neighborhood (if you happen to live around beautiful downtown Fairfax, Va!) developers. Given the length of today’s update, let’s get started.

First, we are currently attending MAGFest (http://magfest.org/) (http://magfest.org/) and showing off the latest build of
Camelot Unchained™. Since the convention is just down the road (about 20 minutes away), we thought it would be a good idea for a few of us to show up and help promote the game. When the venue event is so close, promotion of the game is a good thing, especially when the vast majority of the studio is staying chained to their desks as we continue the march towards Beta 1.

The first day was a total success, as a number of Backers came by to say hi, while a lot more people who weren’t Backers and hadn’t heard about the game loved what they saw, and many said they were going to back the game based on that, so it was a total win-win. As we move into and through Beta 1, we are going to do more conventions to help further promote the game.

Working the booth yesterday were Michelle, Jenesee, Max, Tyler, and myself. Today, Jenesee, Ben, Jon, myself, and Andrew get a turn (or another turn) to show off the game and talk to Backers, while the rest of the team remains at the studio. Promotion is important, but Beta 1 is even more important, so we can’t afford the time to take the entire team to the event. And BTW, this is a working convention (meaning we don’t actually go to panels, watch bands, etc.) for us, not one where the company attends for fun and frolic. Heck, we are even using the convention to look for programmers. We took our “We are hiring” sign to the booth to try and recruit folks at the con!

And now for some shots from the event. Here I am talking to a couple of our many visitors.

Here’s Max and Jenesee demoing the game for a couple of happy folks. 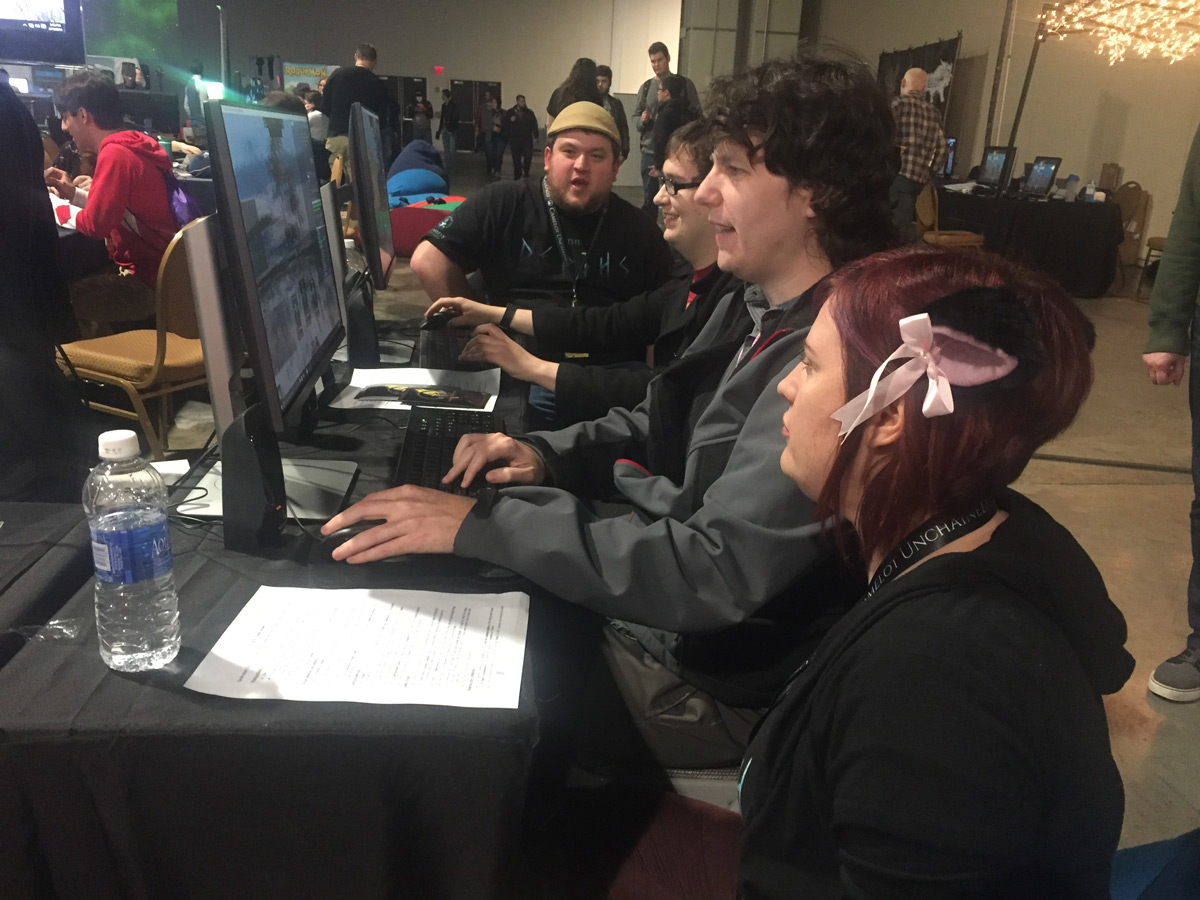 Here’s Michelle mugging for the camera while working at the show. 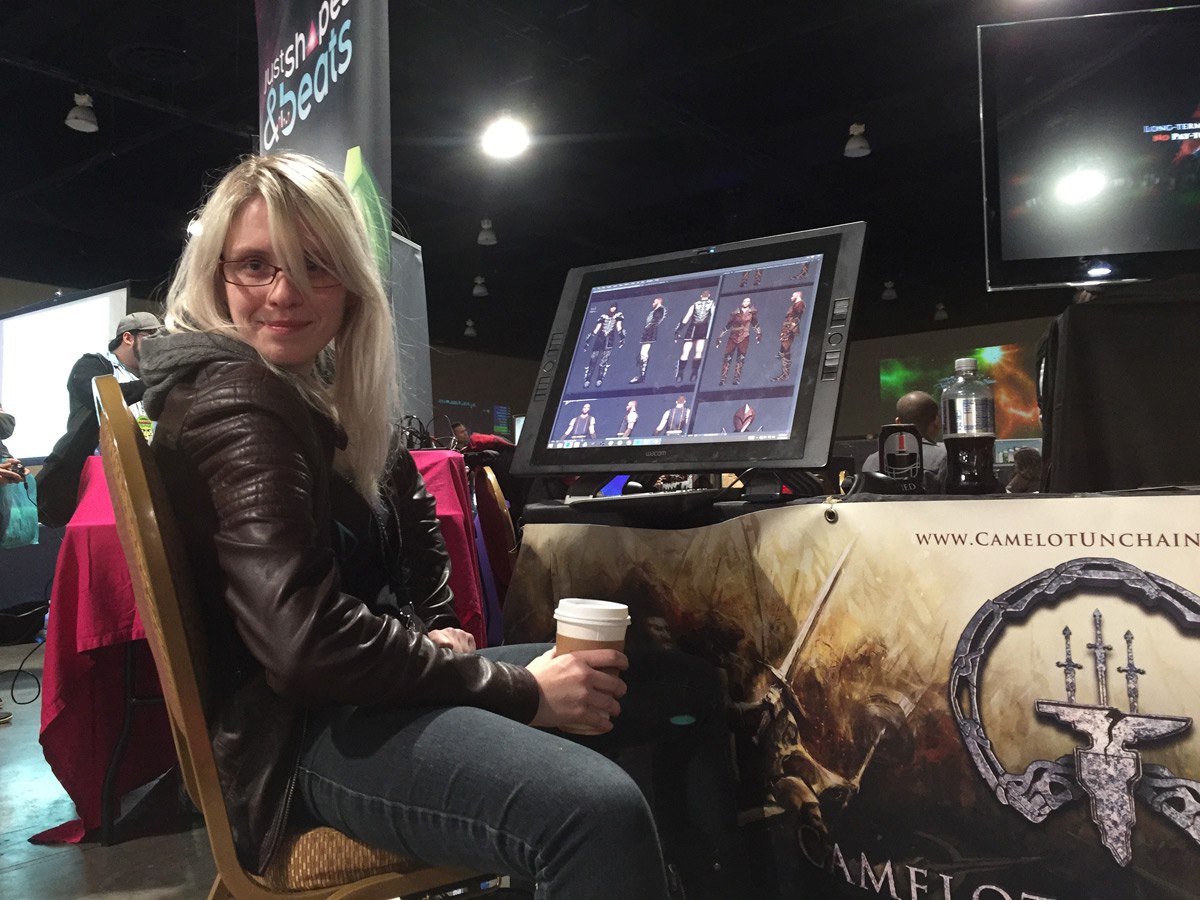 And Tyler working hard trying to get his “Rogue” on. Apparently, Tyler was a serious Rogue fan growing
up. 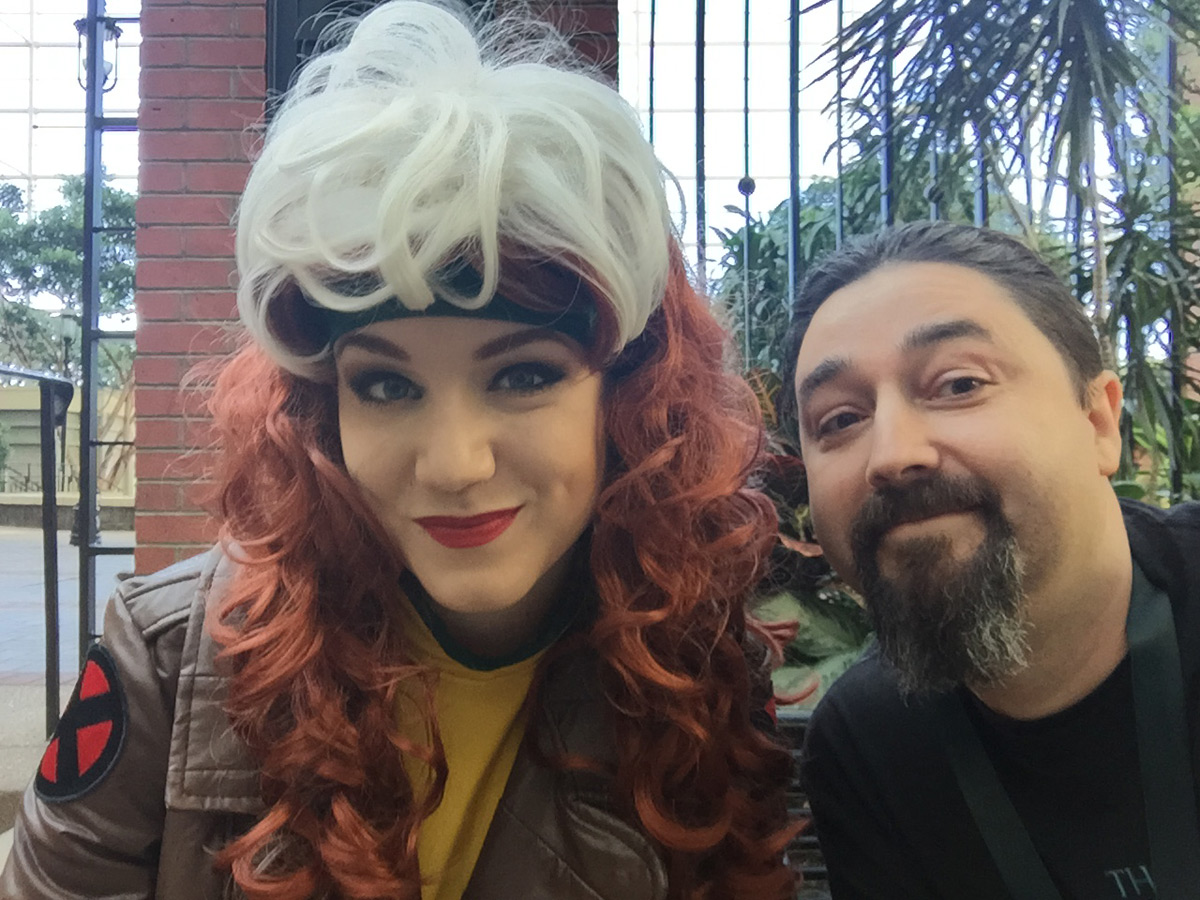 Second, yesterday we revealed the first stage of our new lighting system for the game. If you want to read the full update, you can find it here (http://camelotunchained.com/v3/afternoon-update-thursday- February-18th-2016-environment-light-the-story-so-far-3/) (http://camelotunchained.com/v3/afternoon-update-thursday-february-18th-2016-environment-light-the-story-so-far-3/) . As Andrew pointed out yesterday, improving the lighting system is something that has been planned for a long time. Thanks to the work that George and Andrew are doing, not only will our lighting system not look like a game from 2001, but it will help transform the look of this game into this decade and beyond. Andrew does a great job of explaining how we are making this happen, and what effect it will have on the game moving forward. Please keep in mind that this is only our first pass at just one part of our new lighting system. As always, our Backers get to see how our tech and game evolves in
real time. It might not look like a huge sea-change for the game right now, but if you read the article, you’ll get a better understanding of how important this change and the ones that follow are to the game.

Third, when I crafted the reward tiers for the Kickstarter, I wanted to make sure that they were some of the most fun and reward-filled tiers of any Kickstarter. As part of these tiers, we included lots of extra pledges that our Backers could give to/share with their friends and family. For the last few weeks we’ve been heavily testing the backend tech with our Alpha and IT folks, and we are almost ready for the final stage of testing, the UI. If all goes well, this will happen in the next two weeks, so please be prepared to help us continue to stress test the system. As per always, this is a necessary piece of tech to have before Beta 1 so that the people who have Beta 1 gift tiers can give them to their intended recipients.

Fourth, we are making good progress towards Beta 1. The good news is that we are knocking out User Stories right and left, but the bad news is that we still have a ways to go. Will we make it? All I can say is that we are doing the best we can to deliver Beta 1 on time. Expect another update next week concerning our efforts. In the meantime, here’s the current update to our User Stories.

As a Developer, we continually need to update our software.
Update Wwise to address bugs in previous build. – Complete

As a Backer, I’d like to be able to choose the gender I want to play of each race.
Re-design character creation UI in a simplified yet functional state for later iteration. – Complete

As a Developer, I’d like to increase physics performance, as well as make changes easier to integrate.
Improvements:
Improve player movement acceleration prediction. – Other players’ movements looks far better! – Complete
Fix all the minor math errors that were causing server and client to desync. – Complete
Update code that was keeping players properly alligned to terrain. – Complete
Reduce update packet size by 85-90% to get us back to previous iterations. – Complete
Improve ablity to diagnose and debug server position on client using physics and network perfHud. – Complete

As a Backer, I’d like to see the world of Camelot Unchained continue to develop through its lore.
The Great Depths Raid Part 1 – First Draft – Complete

As a Backer, I’d like to see improvements in server stability, speed, and robustness.
Make loadtesters hard close and restart every few hours to mitigate the effects of crashing bots over time. – Complete

As a Developer and Backer, I’d like to see improvements in memory usage and threading.
Get PhysX scene lock onto the correct thread. – Complete

As a Developer, I’d like the Camelot Unchained website to convey its main features in a more concise and visually impressive manner.
Update pass on available media for media page. – Complete

As a Backer and Developer, I’d like some temporary vfx for testing new combat mechanics and tech.
VFX: Spore Clouds – Complete

As a Developer, I’d like to see improvements in the editor to facilitate my work.
Update terrain editor to work with recent changes to terrain generation. – Complete
Small improvements to particle editor stability. – Complete

As a Backer, I’d like a more efficient and optimized animation system that provides more focused support for the specific needs of Camelot Unchained.

As a Backer in Beta 1, I’d like to have a sampling of generic clothing to wear in game.
Generic pants variations fit Human female model. – Complete

As a Backer in Beta 1, I’d like to have a sampling of Arthurian light, medium, and heavy armor to wear in game.
Medium Armor:
Medium Armor – Weight and integrate assets into editor. – Complete
Heavy Armor:
Heavy Armor – Adjust armor to fit female humanoid form. – Complete

As a Backer in Beta 1, I’d like to have a sampling of Viking light, medium, and heavy armor to wear in game.
Update work sheets to reflect silhouette and low poly improvements. – Complete

As a Developer in Beta 1, I’d like to see improvements in the ability system’s stability and robustness, as well as make it easier for developers to work with.
Update Systems.Collections.Immutable from 1.1.20.0 to 1.1.37.0 – Complete
Replace data structure in AbilityEffect. – Complete

As a Backer in Beta 1, I’d like to play in a Group, Guild, and Party
First pass group UI design. – Complete

As a Backer in Beta 1, I’d like to be able to pick an item up off the ground, put it in my enventory, and if applicable, equip it.
Weapons:
Add function to player to grab stats from equipped weapon. First pass: provide some static stats to be replaced once we get equippable weapons with their own stats. – Complete

As a Backer and Developer, I’d like to play a game that looks like it is from 2016 by implmenting a new lighting and material system.
Capture cube maps from game world. – Complete
Physically based shading: Shaders
BRDF for main light. – Complete
Normalized level of detail settings for lighting – Low, Medium, High. – Complete

As usual, we are making a lot of progress, and we’re not afraid to say so. However, we are still looking to hire programmers (as per the Stretch Goal), and I’m also pushing our recruiter to be even more aggressive in finding talent for the studio by kicking in some additional money. Yeah, I am that serious about getting us more programmers.

In terms of art, we have lots to show. First up is some medium armor for the TDD. 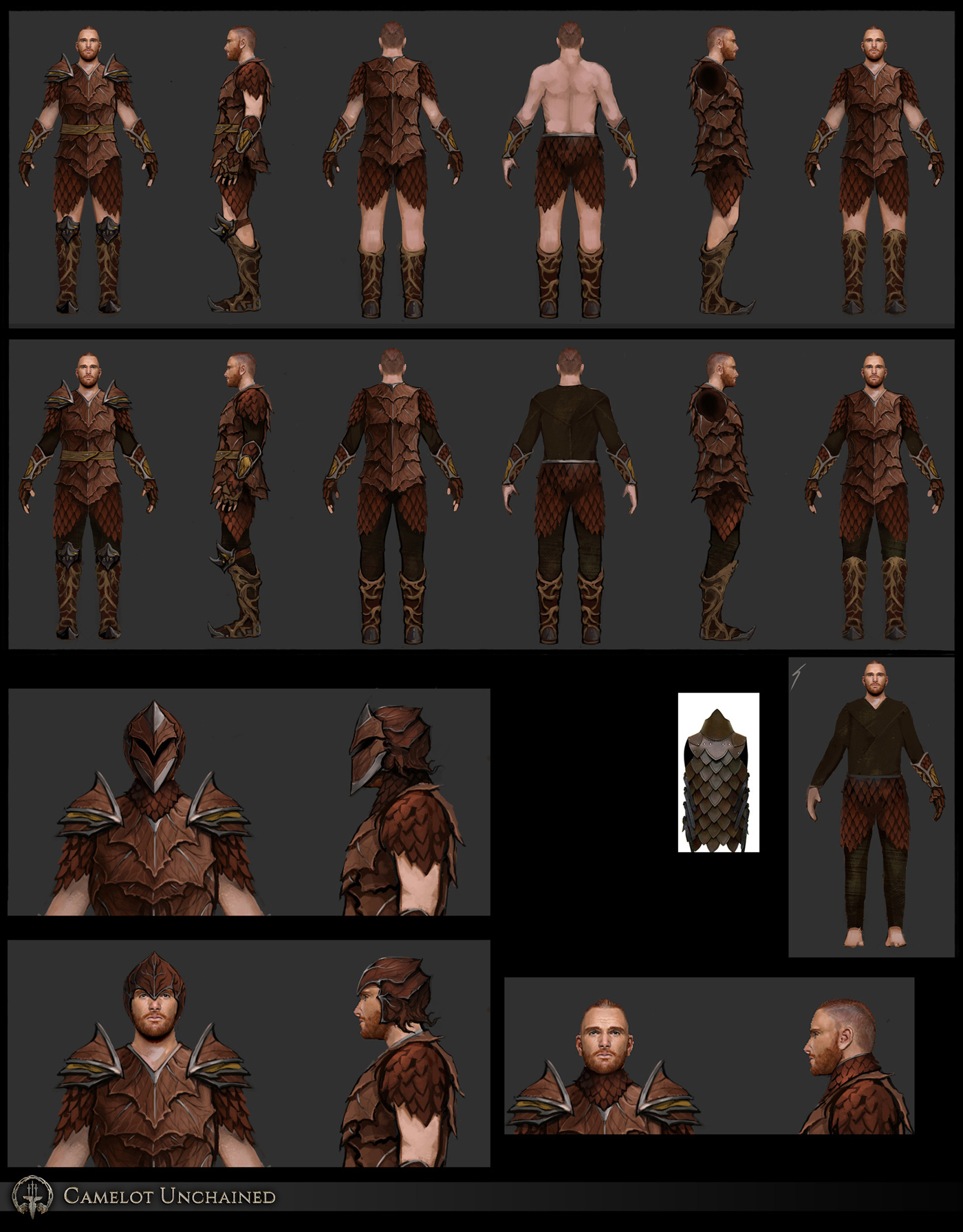 And here’s some Viking armor.

Here’s some work that Scott is doing on the Arthurian Female Heavy Armor.

Here are some sculpts of environmental art from the game. First up, the shoreline. 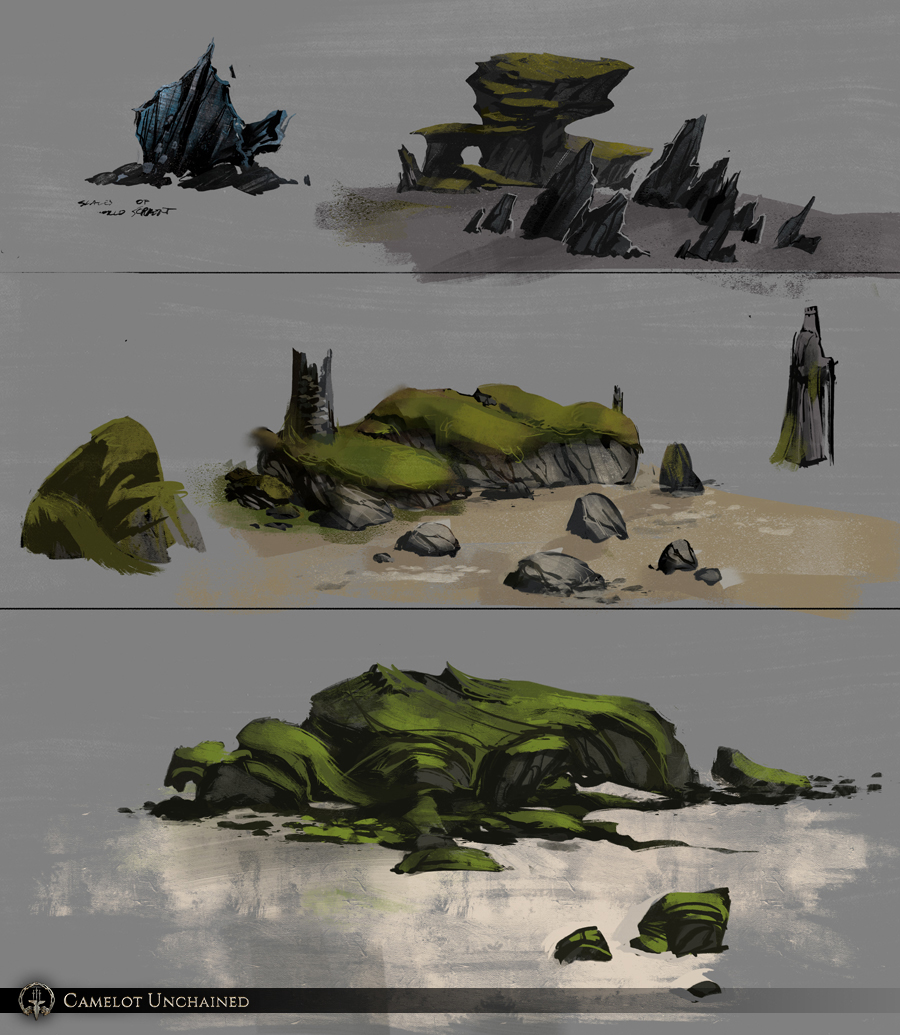 And here some Viking sculpts. 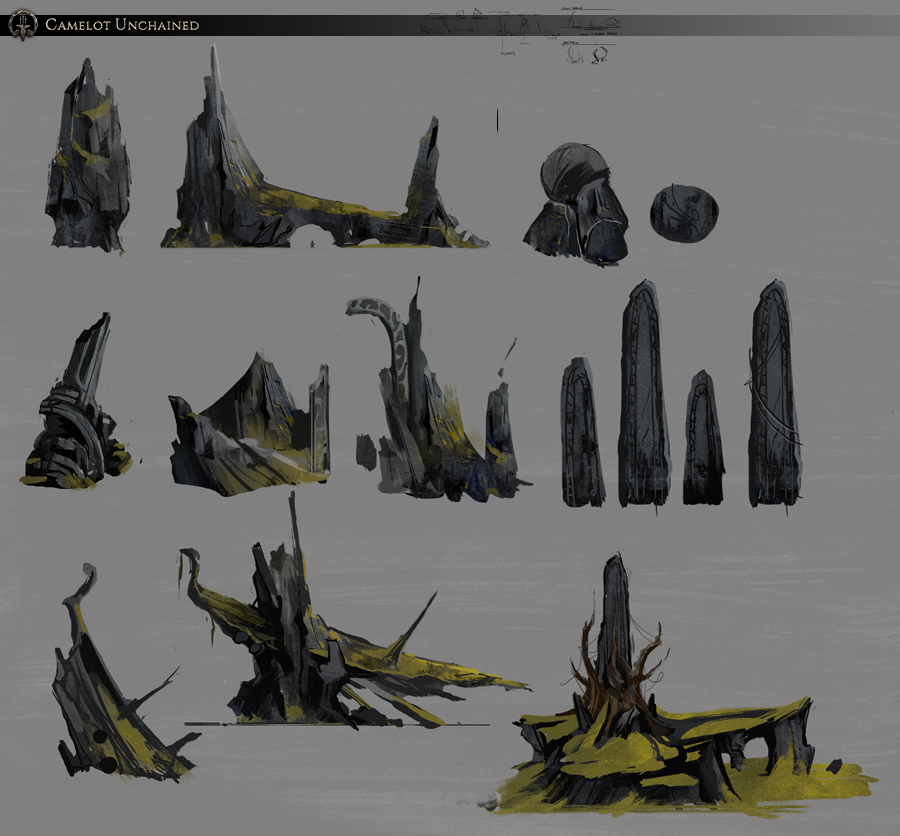 And here’s a new landscape shot. 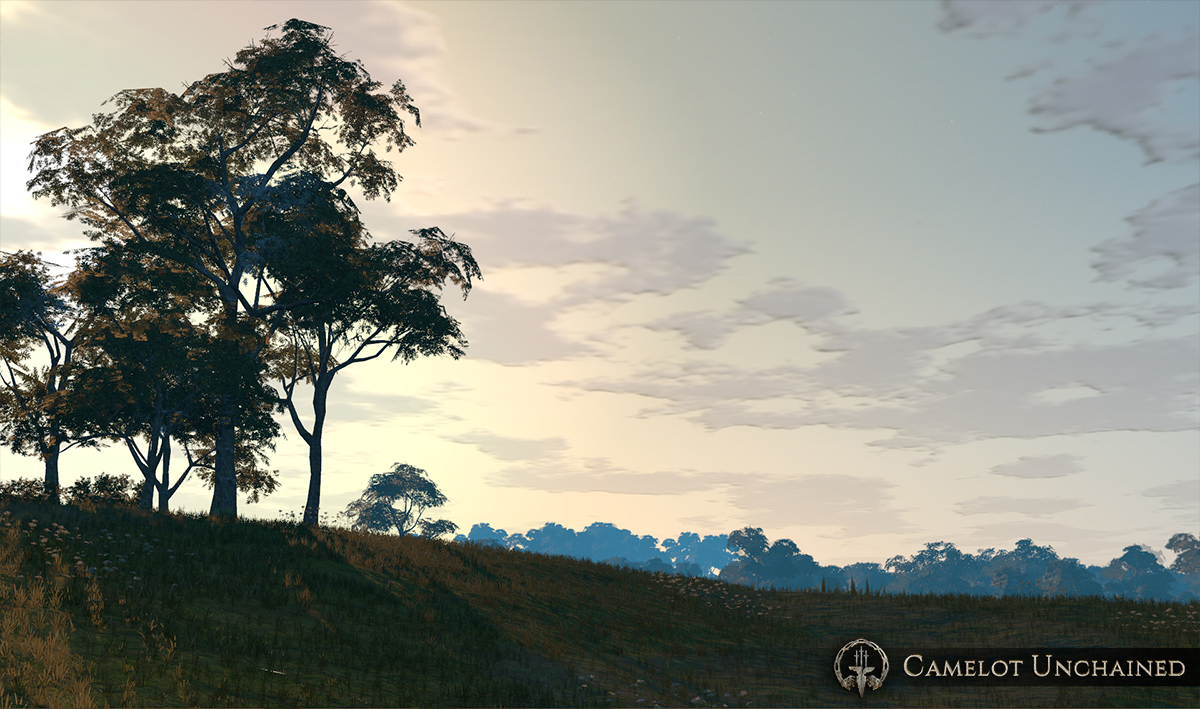 That about sums it up for this week, other than to thank a couple of our Backers who sent us fun gifts. We got even more popcorn from Failboat, and Ludovic sent us a lot of duck-themed pens. Thanks, we’ll put all of these to good use!

Have a great weekend, everyone!