Call it what you like; we are late, behind schedule, etc.  No sugar-coating it, we are late. During our Kickstarter, we promised that we would always be upfront with news, whether good, bad, or middling.  We are committed to an open and transparent process with our Backers, and what we are going to talk about today, with the delay and everything else, will further emphasize that commitment.

We are deeply sorry that we have to delay the opening of Alpha Testing. While the Alpha Test date, like all of our dates, was “estimated,” that does not mean that we should be satisfied with just saying “We’re late,” and move on. The first thing I will address now is why we are late.

Now, is this all bad news? No, there is some good news here too. First, all of our new engineers are meeting or exceeding our expectations for them. The state of the game engine and the improvements that have been going in have allowed us to make up some lost ground, but obviously not enough. Between the BSC Days and the present moment, there have been huge additions to the game engine and tech. Some of these changes are listed later on in this update. For example, the basic A.I.R. (Action, Interaction, and Reaction) system, that we talked about in the BSC days, of ability interaction has been up and running in our Internal Test for weeks, and we are working on implementing the next steps of its development.

As per earlier updates, we specifically slowed hiring of additional personnel, so while we are behind schedule, we have also spent less money than we projected. Just as with our delay of the BSC Daze, we are devoted to only releasing this game when it is ready to be released. We could have cut corners and made some sleazy design decisions and said “Alpha Begins Now!!!” but we won’t do that. We know that we have to hold ourselves to a high standard because of the faith and commitment that our Backers have shown us and we plan to reward that commitment not only by our work on the game but by actions such as I’m going to talk about now.

Our plan to thank our Backers for their commitment in the past, present, and future is made up of several parts. The first and most obvious one is to continue to maintain the kind of communication and openness with our Backers that we have shown since even before our Kickstarter began. Today I did two Live Streams about the change to Alpha Testing as well as this email. While the second stream was made necessary by the lack of clarity and flawed communication in the first presentation, it was something that I felt had to be done. While I hope this will be the last time I have to do something like that, I and the studio will do what is necessary not what is expedient.

That being said, what is the rest of our plan going forward?  The second part of the plan is the Alpha Guarantee. If we have to further delay the Alpha beyond that date, we will compensate all of our Backers with a combination of Founder’s Points, CSE Points, and free days of subscription. The rewards will, of course, be appropriate to whether you are a Builder, Founder and/or lifetime subscription holder, but no matter what your tier, you will be rewarded if we are delayed again.

The current estimated date for the Alpha promised in our Kickstarter is February 2015. This is the deadline that matters for both us and our Backers in terms of our Alpha Guarantee. While that is still the estimated date, if we do not launch Alpha Testing by the end of February, we will be late and will follow-through on our guarantee.

While we know we don’t have to promise this, we think it is the right thing to do. Delays happen, but if we are delayed again, well, that means we aren’t doing our job properly.

While it would be easy to simply delay Alpha and even offer rewards as per above, we realized we would need to do even more. And that’s when we came up with something we think meets the needs of both the Backers and our Team.

In between now and the opening of Alpha, we will periodically open the game to both our Internal Testers and Alpha Testers for everything from small, focused tests, to more massive stress tests. For the sake of nomenclature lovers everywhere, we are calling this the Pre-Alpha Testing Period. During this time, our Alpha Testers will have access to the game in order to help us test stable builds of the game. Internal Testers will still continue to have exclusive access to in-progress builds of the game.

For those who heard my first live stream of the day, this was initially called Alpha 1 and Alpha 2. Based on the feedback we received (basically the virtual equivalent of confused stares), we decided that “Pre-Alpha Testing Period” makes better sense. What I initially called “Alpha 1” (henceforth know as Pre-Alpha Testing Period) will commence when we have added certain features to the game engine that we have currently planned. These features will be detailed in the latter part of this update.

Over the last month, as we prepared for this announcement, we shifted some of our resources to make the game engine feel more like a game. However, at the same time, this has allowed us to work on some key parts of the game engine, such as (and this is just a small sample):

Many of the more recent changes which we have made were all in preparation for the Pre-Alpha Tests (PATs) will commence when all the features on the list to come are implemented. The PATs will be open at intermittent times to accommodate players from major time zones where the vast majority of our players are found. As per our Kickstarter and beyond, our Alpha Test is an old-school Alpha Test, much like the one we did back with Dark Age of Camelot, and what other studios used to call Alpha at the time. Alpha was and is not intended to be even close to a finished game.

No date is set for the opening of the PATs, other than that they have to start before Alpha. The current checklist for the beginning of Pre-Alpha Testing is the following (many of these have already been completed or are well on their way to completion):

To repeat, for clarity: As per our other posts/updates regarding Alpha in February, it will be open to all Alpha and Internal Testers, but our servers will not be running 24 hours, 7 days a week, just like almost every Alpha Test for an MMORPG.

Again, speaking on behalf of myself and everyone at CSE, I apologize for the delay. I hope our openness and willingness to put our money where our mouths are will go a long way.
A link to Wednesday’s 6PM EST Live Stream is here.

I’ve also attached a .jpg with the concept checklist. It is NOT accurate, it is just the concept piece. The accurate one will go up on Tuesday and we will update it as work progresses.

P.S. I also apologize for having to do another live stream. I should have done a better job communicating the thought process that we went through in more detail; as well as the impact that was going to have on testing. As many of you might remember hearing these words before from me, mea culpa. 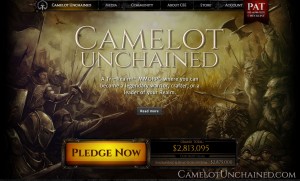 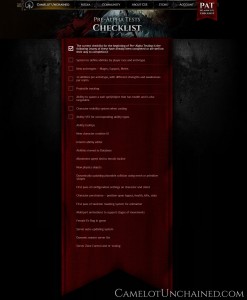