It was truly a sparkling August day (low humidity, lower-than-average temperature) here at CSE. To celebrate the day, I brought in 4 dozen duck donuts (yes, that is the name of the NC-based chain) for the team, which is fueling us in our late Friday afternoon endeavors. And as the day comes to an end, it has indeed been a great day, and we hope it is going to be an even better this weekend, with the next FNF and more.

In terms of this edition of Friday Night Fights, it’s off to a great start! Rock-solid performance from the server and network/client performing as expected. The Mod Squad made its first major contributions to the game, as we now have a working scoreboard for each of the matches that are being played, as well as a special “tips screen” pop-up when you enter the game. The scoreboard for the FNF (Wymrling branch) can be found here – http://camelotunchained.com/v2/scoreboard-wyrmling/

So, congrats to TMS for these additions to the game. Lots more great stuff will be coming from them over the next few months, let alone the next few years! So, enjoy this next round of FNF, but remember, please, we are still in Extended Alpha, and we have not yet begun Beta 1 testing. This means that what you are seeing is still an engine build, and not a true game build. OTOH, it’s a remarkably stable build, and while the abilities you create now are not the same as you’ll be able to build in a few months, it can still be a lot of fun, especially with the scoreboard.

In case you didn’t see yesterday’s update, the video from it can be found here (http://youtu.be/JiZWQ-pvEPA) or below:

The highlight of that update and video, was lead animator Scott Trolan showing some of our thoughts, work process, and animation for our new animation and stance system (the one we’ve been working on from the get-go). It’s a pretty important view for all of our Backers, and/or folks who are interested in possibly donating to our game. Scott touches on all aspects of the system, and why things like “you are what you wear” and “choices matter” are so important not only to the game’s design, but also to the design of the animation system. Our animation and stance system is not just a plug-and-play system, but rather a system that will help make combat in Camelot Unchained™ more than just button-mashing your way to victory!

In a recent update, I showed off some of the work of our new character artist. Well, it’s time for another image from Jon. This time it is a male Fir Bog. I think this guy looks awesome.  The right amount of dark and nasty edge that this race deserves. Folks, I’m really excited about what Jon is going to do next, especially as the darkness begins to rise. Let us know what you think about his work on our Forums, as usual! 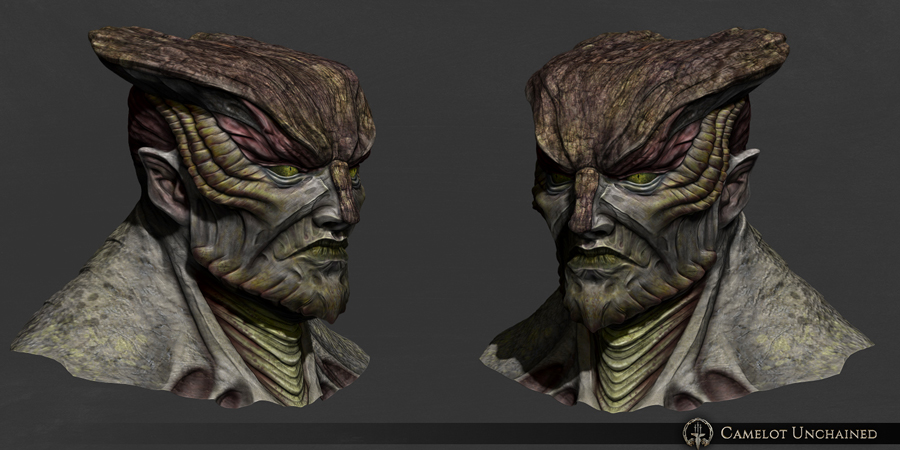 As the summer winds down, I think it is very important for all of our Backers and CSE, to take stock of how far we have come as a studio, Community, and a crowd-funded project. A couple of years ago Camelot Unchained was just a lot of interesting ideas, some basic tech, and a mostly young team. We set out to do something very difficult, not only to create a great MMORPG but, at the same time, to create our own client/server engine. We knew it wasn’t going to be easy, and we communicated that to our Backers and potential Backers during the Kickstarter and beyond. We could have gone the safe route, licensed an engine, even though we knew it wouldn’t let us make the kind of game we wanted to make, and then well, you know how the rest of that story goes. And today, I’m watching our Backers play in an early version of that game, on a home-built engine that is currently doing some things that no MMORPG that I am aware of can do, including using PhysX on the server-side. Our engine today is more stable than any other engine I’ve been privileged to work with, at a similar stage of development. And this engine, the brainchild of my partner, friend and studio co-founder, Andrew Meggs, is only getting better and better as the months go by. You’ve seen the early results of his procedurally-generated terrain system; and you’ll be seeing lots of other things from him and CSE, on the tech-side, even as we transition to building out more of the game in the coming months. Andrew’s vision for this engine is no less than my vision for this game, bold, risk-taking, and more than a little bit BSC. Whether it was our use of Chromium, our unique networking layer or now our procedurally generated terrain system and so much more, the vision for this engine is, at a minimum, unique and the breath of the vision, well, impressive, most impressive.

Accomplishing all of that was and is, no easy feat. Ask yourself how many other MMORPGs, you’ve seen that even at launch were less stable than we are now, in Alpha? Now, while Andrew and I may be the co-founders and leaders of the studio, we wouldn’t be where we are today without the help and effort of everyone at City State Entertainment.  And as always, I thank them for their hard work and dedication.

You Backers should be proud of yourselves, as well. Your donations made this game possible and, when things seemed to turn a bit rocky, the vast majority of you said “MJ keep going” and didn’t head for the hills. None of us here will ever forget that, especially me. Over the decades, people have told me that I possess a pretty powerful memory. And when I say that I will remember and thank you Backers who have shown their continuing and unbroken faith in us, I am also in a position where I can make that happen. And while we, as gamers, have heard promises before from game developers and publishers, I make very few of them. Many of you know the story of what a much younger version of me once said to a company that laughed when I told them that I was going to compete with them and win.  After they finished laughing, they said that they had heard before.  Well, my response was “You’ve never heard that from me” and then I did what I said I would do. Well, when this game is released, I’ll let you Backers be the judge and jury, sitting in for my role. You’ll let me know whether I kept my promise to you to remember to treat you the way your faith and support has earned.

With that and the FNF in full swing, I end this update with some good news on the personal front. My Lady J had her final treatment for her cancer today. With the work on Camelot Unchained moving along nicely, and this most welcome news, all is once again right in my world. My family and I thank you for your support during this difficult time.

Enjoy your weekend! I’ll see some of you in the FNF!