Welcome to another end-of-week update with yours truly, Tyler, reporting live (sort of) from downtown Fairfax, Va. The leaves started turning colors early this year, along with the warmer weather late in the season. This, of course, leaves (Ha!) experienced folks the opportunity to debate the quality of autumn’s changing of the leaves here. Frankly, as a non-east coast native, I can always confidently say it is beautiful to see in person.

Speaking of beautiful, we continue to make great progress on CU, which from a production standpoint is always great, particularly the consistency of it. Over the last couple of weeks, we began working on the support classes. The Arthurian Minstrel, Viking Skald, and TDD Dark Fool. This week, we’ve begun internally testing the first iteration of the Minstrel. We’re working hard to put together a build for Backers to start testing this new and hopefully very fun class.

The bad news is, we’re not quite ready to have a weekend test. The good news, however, is we did find the performance issues we’d reported previously. Our focus will be to get a test going early next week so keep an eye on our tentative testing schedule for more info.

If you missed this week’s livestream with MJ, you can find that HERE1, HERE2, and HERE3.  (We had some internet issues, so the stream is broken into three parts. Just watch them in order.)

Let’s check out the highlights of this week’s progress.

For art this week, per several of our Top Tenish items, we focused on the support classes. Last week, we showed the simple line drawing concepts of the various instruments from Sandra. This week, she took the chosen concepts and did a color and material pass. The material references in each of these is really helpful to our artists. First, the harpolyre for the Minstrel. This instrument actually exists, and you can find videos of people playing it on YouTube! 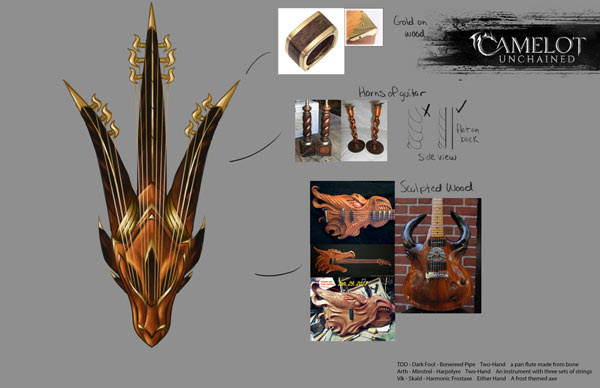 I’m kinda curious what animating this will look like. We’ll probably start off with one animation, then a couple extras, time allowing, so your character is doing different animations for different abilities.

Next, the Skald’s harmonic frost axe. When Sandra asked about this, I told her “good luck!” as honestly I had no idea what this would look like. I think she came up with a great idea on this one, with sort of a resonating “horn-like” chamber in the middle. 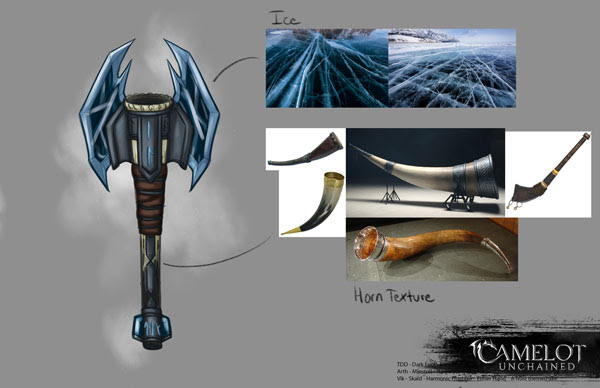 And finally, the bone-reed pipe, for the Dark Fool.

This was the first concept to be completed, hence the first to enter the modeling phase. First we have the high poly, then the material pass. 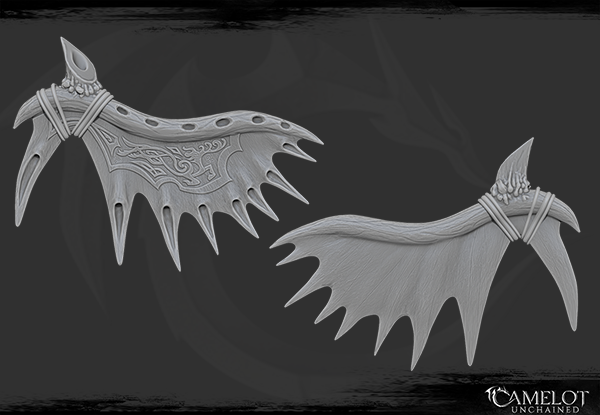 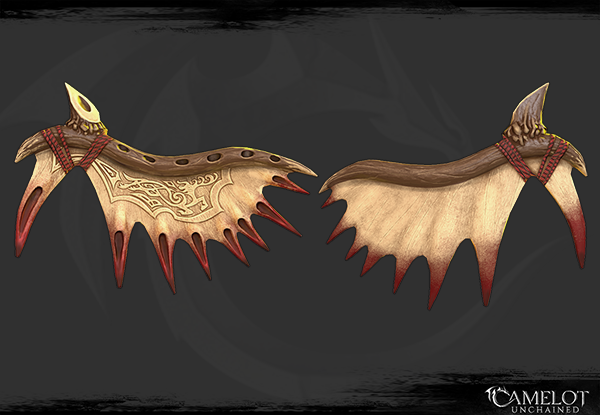 I really like the material pass on this one, particularly the painted red ends. We popped the shine on them so they catch the light. I’m really looking forward to running around as one of these support classes. I love playing support in MMOs! Next week, we’ll also do some animation work now that we have the initial model to work with.

To end this week’s update we’ve got a big thank you for the members of the The Syndicate guild, who sent us some SWAG from one of their recent events. Thanks guys for the thoughtful gift! I remember meeting several members at an event when I started working for CSE, years back, and came away impressed with their sense of camaraderie as well as enthusiasm for CU. 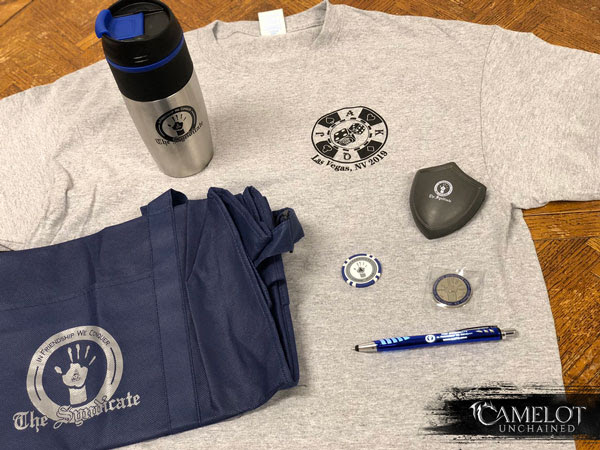 And so ends another fruitful week on CU. Have a great weekend!