Posted on September 9, 2015 by Rift Universe

What makes that number even more impressive is the build they were running. The current build is the first iteration of our new procedurally generated terrain system. Let that sink in. A barely-tested build with a brand new procedurally generated terrain system debuted, and not only didn’t it crash, it didn’t even come close to crashing, during a 4-day shakedown cruise. Heck, we all know what happened to those poor passengers on the S.S. Minnow on a 3-hour cruise, right? So, a great debut for a rather complicated and important system, and a big step forward for our game.

Over the next few weeks and onward, you’ll be hearing a lot about this terrain system. What is very important for our Backers to know is that this system will have a major positive impact on both the game development pipeline, as well as on the overall gameplay of Camelot Unchained™. Why is this so? Well, here’s a number of things to keep in mind:

I’ve promised our Backers, even before you were Backers, that I wasn’t going to try to get people aboard the hype train. And while I have stayed away from the usual “Hear us ROAR!” stuff, this is a major piece of technical wizardry led by the hat-wearing sorcerer himself, Andrew Meggs. And if you like what you have seen, or will soon see (more on this later), know that it will get even better over the next few months.

Last week saw some of the CSE crew attend Dragon Con down in Atlanta, Georgia. A great time was had by all, and the traveling road crew (myself, Andrew, Tyler, Michelle, Brian, and David) were on five panels all told, during the convention. Our own panel was a great success, and our Backers and potential future Backers were treated to about 10 minutes of video/live gaming, and a long Q&A. Posters were given out, gifts exchanged, and by the end of the show, the folks at Dragon Con and I were amicably chatting about what deviltry we could work towards for next year. In terms of that panel and videos, we are going to make them all available tomorrow or Friday, on our YouTube channel (https://www.youtube.com/user/CityStateGames). At 26G, it’s a big ‘un!

Next week, we will have a very important Live Stream. The exact date is still TBD (probably Wednesday), but you will definitely want to check it out. I rarely say that our Live Streams are important (I like to think of them as fun), but this one, well, I think everybody will agree that it was a very important one. And no worries folks, it is a good one. Don’t worry about a safe falling on our heads, or CSE getting bought by an Evil Alliance, or something similar. It’s a good news, no bad news, sort of thing.

We should have another User Story update at the end of the week. With the Labor Day Holiday and Dragon Con, it won’t be as chock-full of goodness as some of our other updates, but it is quality, not quantity, which matters, right? Or was that size?

Also, we will have some very good news for our non-US Backers regarding our store. We will share this news with the Community in the coming weeks. When we reveal what we are doing, and how our European Backers in particular are affected by it, I know you folks across the pond will be very happy with our decisions. We’re sorry that things have taken longer than we would have liked, but sometimes, delays are worth it. In this case, I know our Backers outside the US will be quite happy with the results of the delay.

Next up, we recently launched the nearly-completed German version of our Camelot Unchained website (http://camelotunchained.com/de_v2). So, danke sehr to our German Backers, who made this happen! You folks did a great job on our site, and we greatly appreciate it. Special thanks go out to Tirudan and The Pendragon for their help with this final push. You really made this happen when we needed you to do it! FYI, we want to keep our non-US language sites updated and fresh as a spring day in the beautiful, rolling countryside of Virginia, so we are always looking for volunteers to help us out! So, more volunteers would be most welcome, anytime!

While this isn’t a traditional update, we do have some fine artwork to share with you. First up is the latest model update from Jon. This time the Golem gets a bit of an overhaul. Like Jon’s other work, this guy is definitely a lot more badass than his predecessor. 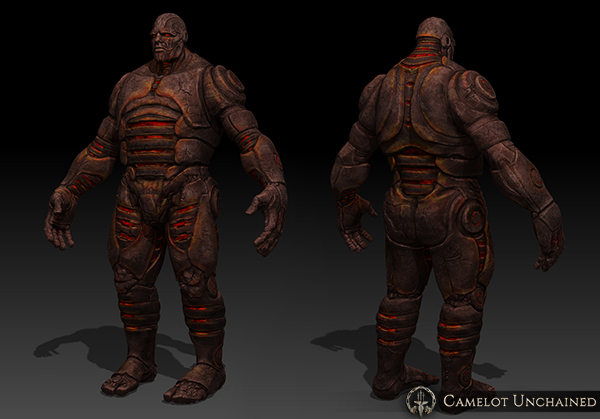 Next up are some screenshots from our game. The disclaimer of “no photo retouching, except for the watermark” applies, as usual. The first shot is at the edge of a forest. 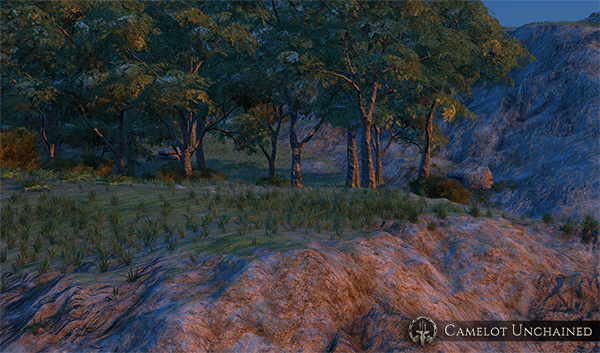 Now we have a shot from inside the forest. 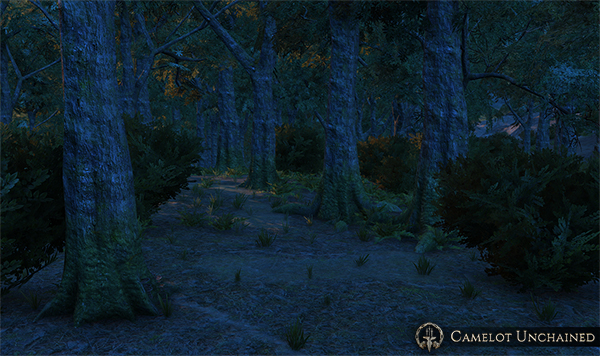 And the final shot captures the changing light at the outskirts of a stand of trees. 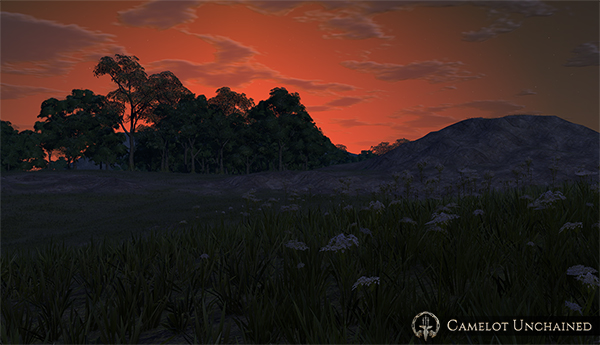 Looks like a bit of an improvement over the terrain from our current video, right? And remember guys and gals, it only gets better from here.